END_OF_DOCUMENT_TOKEN_TO_BE_REPLACED

Gold futures are pulling in hedge-fund bulls again. But retail punters...?
LAST WEEK's urgent bid to buy gold and silver pushes ahead, writes Adrian Ash at BullionVault.
BullionVault users were net buyers of physical gold again today, extending last week's demand as the metal rose above that $1320 level hit by the first crash last spring.
Who else is buying? Not investment funds via ETFs. Such exchange-traded trust funds give stockholders exposure to price, but without physical ownership. Journalists regularly cite them as big drivers of the decade-long bull market in bullion. Yet their holdings barely moved during last week's surge.
In gold, the top two US-listed funds, the GLD and IAU, added only 0.5% more gold to back their shares last week. But the gold price rose 4.0%.
Silver's biggest ETF trust fund actually shrank. Dropping 15 tonnes, the SLV ended Friday holding 10,030 tonnes of silver bullion.
Yet the silver price last week rose 7.3%.
So what's going on? First, there's China. We think that, after record-high demand from its consumers and private investors failed to reverse gold's 30% drop in 2013, this year's  gold gains signal a "flight to safety" in China by much bigger money as its historic credit bubble bursts.
Monday's gold trading in Shanghai says this dash for gold is picking up pace. Volumes in the most popular contract hit a 3-month high, with more than $2.0 billion changing hands. There's also a strong, urgent bid under silver too. Volumes surged to a 5-month high near $2.5bn.
Second, derivatives trading in the West has also turned decidedly bullish on gold and silver. Or rather, it's now markedly less bearish amongst speculative traders.
New York's Comex market is where, using gold futures contracts, mining companies as well as refiners and bullion banks can go to "hedge" their risk, while hot-money speculators increase theirs. Every Tuesday night, US regulator the CFTC gets data from these players, and it publishes those figures on Friday.
You can see on this chart here how the hot money has turned more bullish on gold, but with plenty of room left before it gets anywhere near the peak levels of 2-3 years ago. 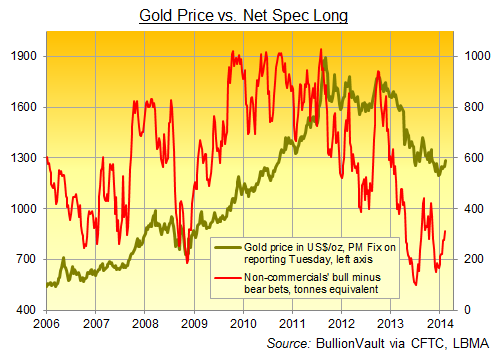 Speculative traders (aka the "non-commercials", to distinguish them from the miners, refiners and bullion banks with commercial interests in the gold industry) raised their bullish betting as a group last week to the highest level since September. Gold was then trading at $1400 per ounce.
The hot money also raised its bearish position, but more slowly. And so the net speculative position (of bullish minus bearish bets) grew for the 6th week out of seven, to equal 310 tonnes-worth of gold contracts.
That compares to the 2013 average of 313 tonnes. For the 5 years before that, the "net spec long" averaged 722 tonnes. So as I say, you can see there's lots of room yet for more bullish betting on gold.
For silver, the same outcome last week but for different reasons. Speculative traders barely touched their bullish bets in the week-ending last Tuesday. But they slashed their bearish betting by almost one-fifth. With prices rising, this is known as "short covering"...where speculators are forced to close their bearish bets....chasing prices higher still.
Gold positioning data for last week also say that private individuals trading futures and options are also out of the game right now. The doctors and dentists (as brokers call 'em, for their love of getting filled and drilled in volatile trade) held an average 36-tonne net long on gold in 2013. That was down from 123 tonnes over the 5 years of 2008-2012.
Last week it totaled just 3 measly tonnes. So however soaked with gold investment stories the financial media might look today, very few private punters are daring to back this uptick with leveraged money just yet.
So all in all, early days for this turnaround in sentiment. Gold and silver priced in a lot of good news for the economy last year. The rebound from New Year's trip back to the 3-year lows hit in midsummer 2013 has only recovered a small chunk of last year's losses so far.
Yes, a little of the hot money is in. So are Chinese wholesales, serving the world's heaviest consumer buyers. But the allocations that really matter, from big Western investment funds, aren't showing in the ETF trust funds. For now.