END_OF_DOCUMENT_TOKEN_TO_BE_REPLACED

Gold has moved exactly how it moved going into the Fed's last 2 rate 'lift-off' hikes...
WILL THEY...won't they? asks Adrian Ash at BullionVault.
The answer most likely, as the Bank of England showed last week, is no.
The US Fed will sit on its hands again at Thursday's meeting. US Dollars will still pay 0% interest. The financial world will still be left drowning in money, with nowhere to put it for a decent return.
All the chatter, however, remains about the idea that the Fed will raise rates. One day. Soon. Maybe.
So gold and silver have continued to suffer. Because while physical bullion cannot default or be inflated, it doesn't pay you anything in monthly or annual yield either.
Cash did, long ago. You may remember those days. It will again one day, people seem to think. Soon, perhaps. Gold and silver will then carry a higher opportunity cost...
...the lost interest which savers, investors and traders could otherwise make simply by holding money in the bank.
Ergo, higher rates must mean lower gold and silver prices. Or so the thinking runs.
But really? Really not. For the record, gold has in fact risen more than 50% of the time when the US Fed has raised its key interest rate. Some 84 times since the start of 1968 the Fed has voted to hike. Gold has risen in 44 of those months.
Gold has also risen more than 60% of the time for UK savers when the Bank of England has raised its key interest rate (64 times since the start of 1968, with gold in Sterling higher 39 times).
Is that because the threat was already priced in? That is today's consensus amongst bullion-bank analysts right now. Sell the rumour, buy the fact, they advise...because gold will rally when the threat of the Fed's first interest-rate hike is lifted by, erm, becoming true.
But again, the data refuse to confirm it. Since 1968, gold has fallen only 34 times across the 3 months leading up to the Fed's 84 rate hikes...barely 40% of the time. For UK savers it's about the same (some 28 out of 64 times, around 44%).
History, then, gives little guidance. Bargain hunters might need to take their chance before the Fed hikes, whenever that is. Would-be sellers might need to do the same. One of those groups will be wrong, but only in hindsight.
Analyst consensus does appeal, however. Because the first hike, if ever it comes, will shift the debate onto how far, and how fast, the Fed might then dare to go.
One little baby-step hike of 0.25% will keep us a long, long way from the old normal 'natural' rate of interest. Economists used to think it stood way up at 5% per year. And that's the level which the Fed got to under former chairman Ben Bernanke in 2005...
...just in time to blow up the US subprime home-loans bubble, and burst the global credit bubble which record-low interest rates everywhere had inflated in the meantime.
The urgency, however, comes from the fact that this week's US rate hike (if the Fed does dare to raise) wouldn't be just any old rate hike.
No. The first hike in more than a decade, it would mark a change of direction after 7 years of zero rates, and the start of a rate-hiking cycle is a very different thing from just another hike once the hikes have begun.
So simply looking at gold's reaction to all US rate rises won't do. If history is to offer any guide to this week's rise (should pigs fly), the question is how gold reacts to the start of a US rate-hiking cycle.
Is there a pattern? Let's ask history. 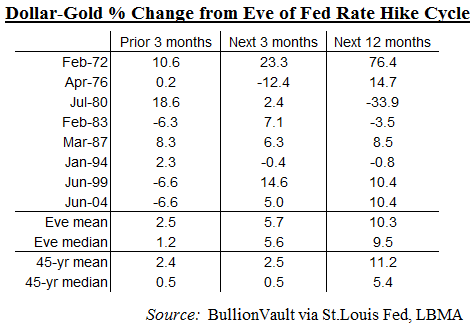 By our count, the US Fed has begun 8 rate-hiking cycles over the last 45 years. This table shows gold's performance from the eve of their start. Which if the Fed does dare to raise rates from zero, is right where we stand again today.
As you can see, the table tracks gold's percentage price-change over the 3 months before each hiking cycle begins...over the first 3 months after it starts...and over each cycle's first 12 months.
At the bottom, you can see the average outcomes, plus the average data for the entire period since 1970 – whether rates rose, got cut, or went nowhere. (Median is the point at which half the results are better, half are worse.)
Averages lie, of course, and circumstances were very different around each of these cycles. They are very different again today. Because if the Fed does raise rates on Thursday, it will be a miracle after the longest pause at the lowest rates in US history.
So please reject or draw your own conclusions as you see fit. But what stands out is the odd similarity of gold's performance around the last 2 rate-hiking cycles.
Both June 1999 and June 2004 saw gold trade 6.6% lower from 3 months before (month-end data). It then rallied – and beat the average gain of all 3-month periods since 1970 – before going on to rise a little less than the mean average of all 12-month periods by the time of the hiking cycle's first birthday, and beating the median by a wide margin with the very same 10.4% both times.
Spooky, no? Spookier still, gold priced in Dollars – thanks to Wednesday's pop higher – is trading 6.6% below where it was 3 months ago.
If the Fed do dare to hike, gold's behaviour going into a US rate "lift off" will look weirdly regular over the last 3 cycles. As for it's behaviour afterwards, I genuinely don't think we'll get to find out. Because I really don't see the Fed daring to raise rates just yet.