END_OF_DOCUMENT_TOKEN_TO_BE_REPLACED

US bond yields have dropped since the first Fed hike. Now big spending looks sure to follow...
ALL SAID and done, confidence in central banking's confidence game remains the prime mover of gold prices, writes Adrian Ash at BullionVault.
Because as the New York Times put it in 1999, with no shred of irony or historical awareness, who needs gold when you've got Alan Greenspan?
Here in 2016, with 'the Maestro' long unmasked as a reckless bubble-blower, and gold prices five times higher, the top central bank, the US Fed, meets today and will announce policy on Wednesday.
Janet Yellen's team keep saying they want to raise rates. This is their last chance before the US election. That also leaves only 2 more meetings in 2016.
So after vowing at the start of this year that the Fed would raise 4 times in 2016, the urgency is mounting.
Either raise this week...or lose another frayed shred of credibility.
What should you and I do in advance? Long-term investors – using precious metals to spread risk – can of course switch off the news and go do something more fun and productive instead.
Shorter-term traders, plus would-be buyers wanting a dip or investors wanting to sell before a hard drop, have to weigh two things against each other.
On the one hand, that growing urgency at the Fed now comes against the most benign backdrop to a rate rise since it fluffed its chance to raise in September 2015.
The US stockmarket has set a new all-time high this month on low volatility. House prices keep rising, the official jobless rate is as low as anyone can remember, the US population has never been so wealthy and even inflation may be ticking higher.
But just because it's now or never, that doesn't mean the Fed will choose "now".
The rest of the world is of course going in the other direction. The Bank of Japan's big policy review ( also due Wednesday) is likely to see more QE and negative rates in the long run, not less. The Bank of England has just returned to rate cuts and new QE money creation. The European Central Bank is only just getting warmed up, with Portugal's worsening bank and government debts offering a chance for the Eurozone's worst crisis yet as soon as October.
Betting in the futures market meantime sees only a 1-in-8 shot that the Fed will raise on Wednesday. Longer-dated US government bonds have meantime risen in price since the first hike of December last year. That's pushed longer-term interest rates not up but down by half-of-a-per-cent...
...a full two US Fed rate hikes in reverse, both on conventional (the higher lines) and inflation-protected bonds. 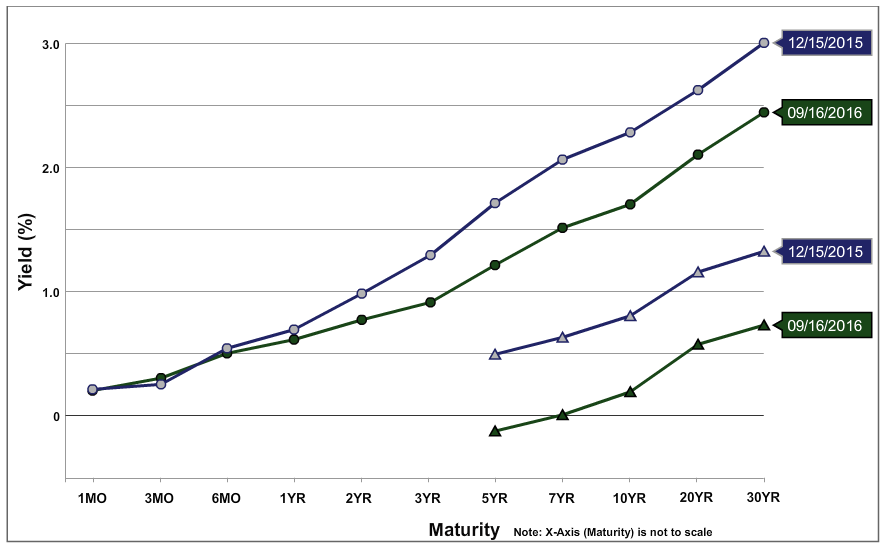 But while the rising stock and bond markets seem confident that the Fed won't spoil the party, hot-money traders have started to cut back their sudden interest in gold.
Shooting to new record highs as prices hit 2- and 3-year peaks this July, hedge funds have since cut their bullish betting, net of bearish bets as a group, by almost 13% in Comex futures and options.
Gold ETF holdings have also retreated, shrinking almost 5% from the peak of this year's sudden surge.
Could these professional know-it-alls actually know something? Or are they just ringing the bell for contrary-minded investors and traders to do the opposite?
Either way, and against all received wisdom, gold prices in fact tend to go up when the Fed does raise rates.
Yes, really. You'll find the full story on Fed rate rises vs gold prices on GoldNews here.
There's no guarantee a Fed rate rise Wednesday will repeat this pattern. But whatever monetary policy the world gets from its No.1 central bank this week, pleas for help from the other type of government meddling – fiscal policy – continue moving away from austerity and back to something from the 1960s or '70s.
"Philip Hammond has a golden chance to get the economy motoring," The Times in London tells the UK's new chancellor, urging big spending, big deficits.
"Coming soon," hopes the New York Times, " Big spending on roads, bridges and ports."
That's whether Hillary or Donald bags the White House. How might that surge in deficit spending constrain higher interest rates, and force fresh QE bond-buying by central banks?
And what might gold and silver prices make of that?