END_OF_DOCUMENT_TOKEN_TO_BE_REPLACED

"HEDGE FUNDS find ways to trade Euro misery," says a Reuters headline. With no hint of irony, the newswire includes gold in its list, says Adrian Ash at BullionVault.

"Greenlight Capital's David Einhorn recently said he is bullish on gold and gold miners, in part because of concern about the fallout from a Eurozone meltdown," Reuters goes on. Yet the Eurozone meltdown, to date, has done nothing for Gold Investing but show it up as a failed "safe haven" – a has-been, a fraud and a charlatan.

Tuesday's drop back through $1560 per ounce came precisely as the single currency sank through $1.24 on the FX market. So is the Euro as good as gold, or is Gold Investing in fact only as "good" as the Euro? 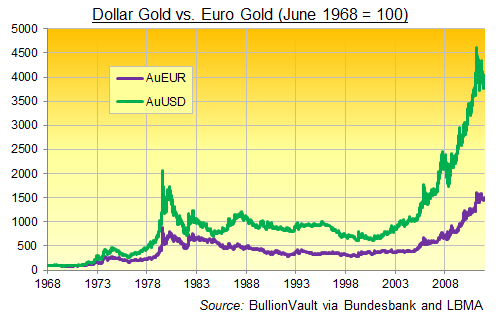 Our chart shows the Gold Price in Euros, and before that in Deutsche Marks, compared against the price in US Dollars. Both are converted into an index, starting at 100 in June 1968, when the Frankfurt Gold Fix began. And as you can see, the metal has been far moe volatile in the greenback than in its European competitor. But no doubt German investors still appreciated the 10-fold gain of the 1970s.

"Until gold broke above the €350 per ounce barrier that had contained it for four years," wrote John Hathaway at Tocqueville Asset Management in mid-2006, "conventional wisdom held that the currency was a superior way to hedge Dollar weakness because it had both yield and liquidity in its favor."

Calling the Eurozone's 2005 relaxation of its Stability Pact rules on debt and deficits "good news for gold", and noting gold's clear breakwards up through that €350 level, Hathaway said gold was already suffering a different "identity crisis", then being mistaken for just another commodity rising on the tide of Asian growth.

Fast forward to mid-2012, and gold has clearly broken away from that disguise in turn, doubling in terms of the CRB commodities index since the financial crisis began. Yet here it is again, unnerving both US and British investors by putting on a funny accent and waving its arms wildly. Not even Eurozone savers are choosing Gold Investing above "safe haven" government bonds. Meaning the government bonds of Germany, however. Not the government bonds of Spain or Italy. Because unlike gold, not all Euro debt is the same – fungible, incorruptible and impossible to destroy or create.

That lack of consistency is in fact the big problem, forcing debt costs higher for Madrid and Rome, just as it did for Athens, Lisbon and Dublin. Because domestic banks, pension and insurance funds are legally bound to avoid foreign exchange risk by only buying assets denominated in their domestic currency. Yet today, and thanks to the Euro, that means Spanish banks can join the rush to bid up German Bunds...leaving Madrid without a forced buyer, as used to happen in recession.

The real identity crisis, meantime, doesn't lie in the gold market. Instead, it lies in the Euro – which is either the Deutsche Mark or the Drachma, but cannot be both. Applying the fiscal policy of the former but the monetary style of the latter has got Europe to this happy pass.

Let's see how gold performs as the crisis makes Brussels and Frankfurt jump one way or the other – together or separately.