END_OF_DOCUMENT_TOKEN_TO_BE_REPLACED

China accounts for just 1% of world gold ETF holdings despite surge...
GOLD ETF demand in China rose 120% in the first 3 months of this year, new data show.
But the sector remains tiny compared to both the world market for gold ETFs and against China's overall gold investment demand.
Needed to back the value of stockmarket shares in trust funds designed to track the gold price, the amount of bullion held for China or Hong Kong-listed ETFs rose from 9 tonnes to almost 20 tonnes during the first quarter of 2016.
Almost 95% of that growth came in one product, the Huaan Yifu Gold ETF (SHA:518880). All told, China's households gold investment demand last year totaled 203 tonnes according to specialist analysts Metals Focus.
Two of China's 6 other gold ETFs grew during Q1 2016, but only by 1.2 tonnes between them, while two more held unchanged and 3 shrank, losing 0.4 tonnes together.
First launched in late 2010 with Value ETF's Hong Kong-listed gold fund (HKG: 3081), gold-backed trust products in China struggled to accumulate more than 5 tonnes between them until August last year. 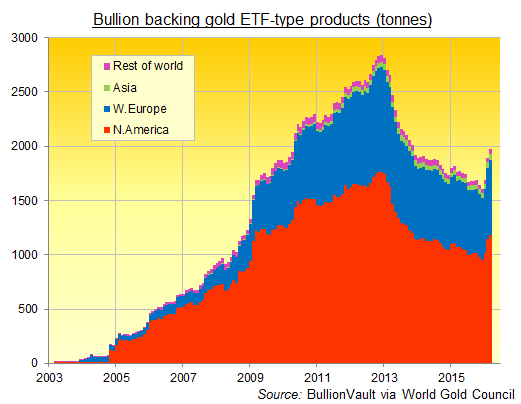 The 7 funds now on offer have more than doubled the quantity of metal needed to back their shares so far this year. But that addition accounts for only 3% of the 363 tonnes added by gold ETF-type products worldwide since 1st January.
Still below 20 tonnes, China's gold ETF holdings equal only 1% of the world total. Asian-listed ETFs comprise less than 3% of the total.
Peaking at 43 tonnes during the gold-price crash of April to June 2013, gold ETF products in India – formerly the world's largest consumer market for gold, until overtaken by China over the last 3 years – ended March 2016 holding 23.6 tonnes of bullion, the smallest month-end quantity since the Dollar price peaked in late-summer 2011.
The largest such fund worldwide in contrast, the SPDR Gold Trust (NYSEArca:GLD), closed Monday unchanged in size at 817 tonnes, shrunk by less than 1% from end-March's 27-month highs.
Exchange-traded trust fund products were first developed 25 years ago, with the aim of tracking moves in the US stockmarket at low cost to investors.
The first gold ETF was then launched in Australia in March 2003 (ASX:GOLD), with products then listed in London, across Europe and finally New York by November 2004.
Typically charging 0.40% in annual fees (compared to 0.12% or below for professional storage of physical gold owned outright), gold ETFs at their peak of late 2012 held over 2,800 tonnes worldwide according to new data compiled by market-development organization the World Gold Council – then almost a full year's worth of global gold mining output.
Aggregate bullion holdings then sank by 43% over the following 3 years, shrinking to 1,610 tonnes by the end of 2015.
Gold ETFs have, however, now recovered almost one third of that outflow in just the first 3 months of this year alone.
"The extent of this year's rebound in holdings," says the latest monthly precious metals analysis from Canadian investment and London bullion market maker ScotiaBank, "far outstrips the 88 tonne rebound seen in early 2015.
"As such, it does look as though the trend in investor interest has turned bullish."
"The amount of money needed to support and/or move the gold market higher," adds London brokerage Marex Spectron, "is an infinitesimal amount of the money within the financial system.
"People forget that in comparison to stocks, bonds, currencies etc, the gold market is tiny. The more people mistrust these other markets, the more gold benefits."