END_OF_DOCUMENT_TOKEN_TO_BE_REPLACED

Just cos it's on ZeroHedge doesn't make it fake...
AMONG many terrible things, being British means getting robbed by the FX market every summer you holiday abroad, writes Adrian Ash at BullionVault.
That's not actually true. But it feels like it. So much so, we checked the data after getting stiffed by the Pound plunging yet again this summer (versus the Mexican Peso as it happens).
And fact is, the last two decades have only seen July or August mark the Pound's low for the year just twice in US Dollars and just four times in Euros.
(The Peso's pattern is stronger. Summer saw GBP/MXN set its monthly low for the year 6 times since 1999. Who knew?)
Still, you ask anyone exchanging a few quid for their holiday money in summer 2020, and they will no doubt mutter about a conspiracy among currency traders.
Because every summer, the Pound slumps...just when the most Brits needs it not to. Even if it's not true.
Hold my beer, says gold.
"Right on cue, as we detailed, precious metals prices have been pummeled as China Golden Week begins," snarled ZeroHedge on Monday. 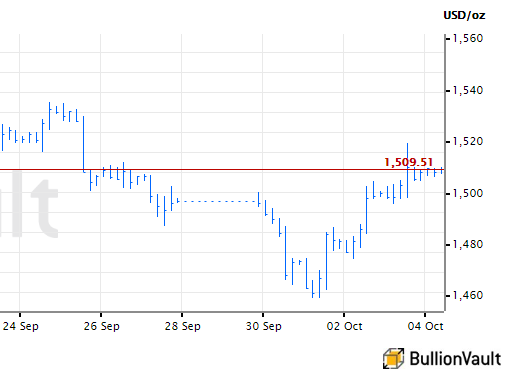 "The price of gold and silver were absolutely massacred," ZH reports, repeating itself from 2016.
"With China closed, the markets were open for rampant manipulation, which is exactly what happened as several billion dollars in leveraged paper assets were dumped on the market."
Here in Golden Week 2019, Shanghai's gold market – the only legal entry point for bullion into Chinese circulation – had in fact been open on "massacre Monday", closing as usual around 5am New York time.
By then, gold had already lost $60 per ounce from its new 6-year high at the start of September. And the "pummeling" didn't begin for another 4 hours...
...finally bottoming on Tuesday some $40 below where Shanghai had left it ahead of 1st October's National Day (this year marking 70 years since Mao Zedong declared Communist rule over the world's most populous nation).
Fast forward 24 hours, and gold on Wednesday recovered Tuesday's drop. It then rose again on Thursday, rallying above last weekend's level at $1500...
...even as Shanghai's gold market stayed shut for the rest of the autumn Golden Week holidays.
No update or correction on that ZH story so far.
But just because something appears on ZeroHedge – in between the Greta-baiting, Soros-hating and Russian dating – doesn't mean it's wrong.
Might the "Golden Week smackdown" carry a grain of truth?

Put the "massacres!" and "manipulation!" to one side. Unless you want to call gold's even bigger rally the same.
"Historically this has not been a bullish event," says a note from Canada's Scotiabank of China's National Day holidays, seeing what it calls a "lack of key liquidity as China heads into Golden Week."
Why might China matter to world gold prices?
So when the world No.1 takes a week's holiday and shuts its financial markets, that must pull the rug from under the gold price every time. Right?
If you're searching for proof, it looks increasingly plain since 2013. Gold fell every time from 1 month before, squeezing ever-more of that drop into the last week before National Day.
Case closed! Or not. Because like Scotia goes on to say, the start of Golden Week 2019 offers only one of several possible reasons for gold's slump around last weekend. One of six on their count in fact, ranging from stresses in the 'repo' money market driving interest-rates higher, to quarter-end strength in the Dollar, to chart-watching traders drawing lines that gold couldn't break above but found too easy to fall through.
Likewise over the prior 6 years, other news events coincided with gold's late-Sept/start-Oct weakness. Most especially interest-rate news, raising the cost of borrowing and so raising the opportunity cost of investing in gold rather than bonds or cash in the bank.
National Day 2018, for instance, came straight after the US Fed raised its key interest rate...
...2017's came after the Fed said it was going to hike...
... as did 2016's pre-Golden Week drop...
...while 2015's drop, made amid gold's 4-year slide towards $1000 per ounce, came as then-Fed chief Yellen promised the first US rate rise in over a decade...
...and 2014's found hedge funds already selling gold short as longer-term investors showed "boredom or despair" as the metal kept falling...
...while 2013, well...2013 saw gold tumble even as record-high Chinese and Indian demand coincided with a raft of doom-n-gloom headlines most pundits thought should've been gold bullish.
Back then, as now, several analysts thought China's absence from the wholesale market might matter in Golden Week. But what mattered more was the true size of its huge bargain-hunting on 2013's earlier gold crash. 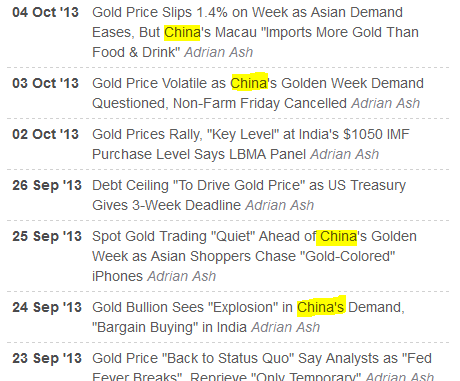 Away from Shanghai, what had other asset classes been doing as China got ready to mark National Day and shut its big bullion market for a week?
Including 2019, the Dollar gold price has – over the 1 month before National Week – moved opposite to the US stock market (S&P500) six times in seven. On a 12-month basis it has moved opposite to longer-term US interest rates (10-year Treasury bond yields) five times in seven.
So sure, try to trade National Day 2020 if you must. But if it appeals that much, try to trade Christmas first... 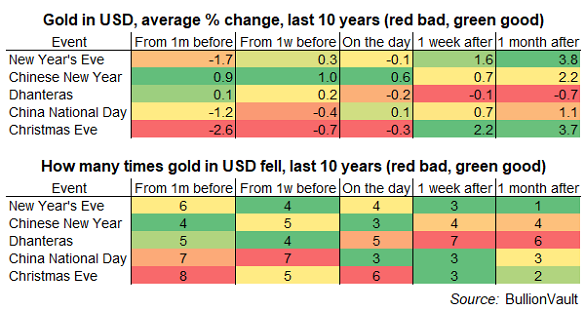 ...ready for the near-clockwork rise that gold prices now show in New Year. January has now ended with gold higher than New Year's Eve 14 times in the last 20.
Or maybe just buy here in October and wait. Because if you're trying to play seasonal patterns in gold, 4 of the 5 strongest New Years so far this century have come after both November and December had already seen gold prices rise.