END_OF_DOCUMENT_TOKEN_TO_BE_REPLACED

Heaviest gold demand since gold was money...
CENTRAL BANKS as a group bought more gold in the third quarter of 2022 than ever before – a record 399 tonnes, according to the World Gold Council, writes Adrian Ash at BullionVault is this article first published at Das Investment.
That estimate already takes the sector's net demand for January-to-September above any full-year total since 1967, back when the almighty US Dollar was backed by bullion and most other currencies were backed in turn by Dollar and gold reserves.
For gold investors, the largest official-sector purchases since the world was on a gold standard may sound like a cause for celebration. Surely it will send the price soaring? Perhaps it might signal the return of gold as money?
But the move in fact signals growing distrust and geopolitical tension between major economic powers, and while gold has outperformed any other tradable asset class outside energy commodities in 2022 so far, global prices actually fell in Q3 in terms of most currencies. There are 3 further key points to note.
Firstly, the new figure from the mining industry's World Gold Council includes, in its own words, "a substantial estimate for unreported purchases" – and for "substantial" read "heroic".
Data from the International Monetary Fund, also compiled and published by the WGC, says that central banks as a group were small net sellers of gold in Q3. So the third quarter's adjustment in fact equates to more than a third of July-to-September's total gold demand worldwide.
That doesn't mean we should discount the figure. The WGC's data is widely-respected (and rightly so), and some level of adjustment to the central-bank figures is very common, because not all central banks report their foreign-currency or gold holdings to the IMF each month. That leaves a margin to estimate, and the margin is widening.
Across the last 10 years, the WGC's figures now outstrip the growth in reported holdings by almost one-half, totalling an additional 1,500 tonnes and equal to more than 42% of current annual gold-mining output worldwide. 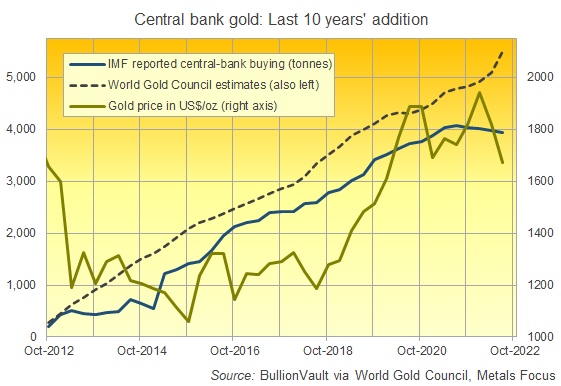 Secondly, however, the size of the WGC's estimate for Q3 2022 is massive, and it needs to be.
Added to the central-bank activity reported to the IMF, the WGC's Gold Demand Trends report shows visible private-sector purchases lagging total supply from mining and recycling by 468 tonnes; that almost matches the series' record gap of Q4 2020, and it's more than 4 times the average quarterly gap of the last 10 years.
How to account for this 'missing' demand? Most often, the WGC's presentation assigns any such gap down to 'over the counter' demand for vaulted bullion from banks, dealers and larger investors in the world's wholesale market, centred in London. For July-to-September 2022, however, this line – which the WGC says also includes "any unobserved changes" in manufacturing inventories plus "any statistical residual" between total gold supply and demand – is estimated at less than 40 tonnes, barely two-fifths its average quarterly size across the last 10 years. So the WGC's central-bank estimate is clearly considered and deliberate; it isn't being used to plug a gap in the data.
Thirdly then, who might be hiding the true size of their gold position? The WGC report doesn't name them, but the world's top two gold-mining nations – China and Russia – are already the 7th and 6th largest national gold holders on the IMF data, and neither of them now report their gold reserves on a regular basis. Both China and Russia also have a history of buying and holding precious metals through government agencies outside their central banks, enabling them to acquire bullion with the 'white lie' that it isn't sitting in their foreign exchange reserves. So analysts, internet blogs and mainstream media have all been quick to identify China and Russia as the mystery buyers.
The People's Bank of China has sporadically updated its numbers in the past – suddenly announcing accumulation of 400 tonnes in spring 2009 and then another 600 tonnes six years later – and it briefly met the IMF's requirement for monthly updates in 2015 and again in 2018 before going dark once more. The monetary authorities in Moscow, in contrast, reported the size of their stockpile every month until February this year. Since then, the world's revulsion at Russia's invasion of Ukraine has seen Moscow stop sharing its figures, because both the central bank and commercial traders are now locked out of the global FX and bullion markets.
This is important, because Russia is the world's second largest gold-mining producer, after China and ahead of Australia. US and EU sanctions against Moscow in 2014-2018 over Putin's annexation of Crimea saw the Central Bank of Russia buy more than 80% of the country's domestic mine output, building its foreign-exchange reserves by spending Rubles to support a key industry
But since new US/EU sanctions took hold in spring 2022, the CBR has said it has no intention of supporting domestic gold miners by repeating that strategy of growing its bullion reserves. So if Russia's central bank isn't buying that bullion (or not buying all of it), then many experts believe China must be importing it, firstly because it hasn't imposed any sanctions against Moscow, and secondly because it represents both the world's largest gold consumer market and also a major central-bank buyer and holder.
Why would the People's Bank of China feel the need to buy lots of gold? For central banks everywhere, "Gold will remain a key asset in our strategy, especially amid uncertainty," said Hélder Rosalino, a member of the board of directors at Banco de Portugal, at this October's annual conference of the London Bullion Market Association, held in 2022 in Lisbon. Gold "protects portfolios in turbulent times," he went on, repeating a view commonly stated by central-bank reserve managers which is supported by analysis of the valuable role of gold in diversified investment portfolios.
China, however, is also "thought to be stockpiling gold to cut greenback dependence" as newspaper Nikkei Asia said this month, reporting the WGC figure for Q3 and quoting several bullion-market experts to support the idea that the PBOC wants to diversify its assets away from the Dollar. Given the stark experience of Russia – now locked out of global finance, faced with price caps and sanctions against its energy exports, and with its overseas assets now frozen – the authorities in China, along with other non-Western nations, may very likely be eager to accumulate gold and keep it at home.
In short, 2022's geo- and monetary politics make Beijing and Moscow look like prime suspects as the mystery gold buyers behind Q3's record demand. We are living in an increasingly divided world in terms of international financial flows, and the continued decision by Moscow and Beijing to hold most if not all their gold bullion reserves at home – rather than in a global gold trading centre such as London or New York – shows how mistrust of the US and other Western nations is affecting strategic considerations.
Indeed, the quantity of gold held in custody at the Bank of England on behalf of foreign central banks has fallen this year, down by 490 tonnes even as global central-bank holdings in total have risen by 670 tonnes on the WGC estimates.
Keeping a little gold at home, close to hand in case of serious domestic problems, always makes sense for central banks as well as for private investors. The Deutsche Bundesbank, for instance, continues following this strategy, with half of its gold reserves now in its vault in Frankfurt. But as the 2nd largest central-bank gold owner also shows, keeping some bullion overseas – spread between key trading locations, and perhaps spread across different continents – ensures that domesic turmoil won't prevent you from realizing the value of that gold should a genuine crisis require it.
The fact that today's heaviest gold buyers are being secretive and are hoarding their bullion at home signals a dark turn in global monetary politics. There's little cause for celebration in that.