END_OF_DOCUMENT_TOKEN_TO_BE_REPLACED

Putin, trolls and central-bank gold vaults...
A SHOCK decision from the US Fed to raise rates then! snarks Adrian Ash at BullionVault.
Almost as shocking as the National People's Congress in China making Xi Jinping president for life last week...
...or the top central-bank job in Beijing going to long-time party stalwart Yi Gang on Monday.
As for Russia electing Vladimir Putin yet again at the weekend, Cuba's Raul Castro was quick to give his congratulations to the former KGB agent.
So was Nicolas Maduro of Venezuela and Evo Morales of fellow socialist state Bolivia.
Iran's Hassan Rouhani emailed to say 'Well done' as well...
...while Xi Jinping himself managed to send a note of congratulations without once joking about who'll get to crush dissent and imprison political opponents the longest, him or Vlad.
That's a very selective choice of Putin's well-wishers. Each one a wannabee tyrant accused of vile human right abuses. And that's without even mentioning EU chief Jean-Claude Juncker!
But that's the thing with international politics.
For every bad man you can name, I can find a hypocrite...a liar...or a crooked compromise...to match.
So for the record, Germany's own elected leader for life Angela Merkel also sent a kind of congratulations to Putin, while other 'free world' leaders ticked the box marked 'Well done' even as Russian election observers cry foul over vote-rigging.
The Russian victor most likely won't get a telegram however from Britain's utterly unelected head of state, nor from Her Majesty's prime minister, nor from our professional clown of a foreign secretary.
Not with nerve agent "of a type developed by" Russia being used to attack a former spy and his daughter in the quiet English cathedral city of Salisbury, and making a police officer critically ill as well. And not with the Russian state actively trolling the all-too-easily-trolled British government as if this really were all just a thread on Twitter.
First UK defence minister Gavin Williams felt bullied enough to actually say " Shut up and go away!" Then Boris Johnson himself  proved Godwin's Law by calling another buffoon's reductio ad Hitlerum "certainly right".
Putin, said BoJo, is  "glorying in [the] sporting event" of this summer's football World Cup in Russia in just the same way as the teetotal, anti-smoking vegetarian with the Chaplin moustache gloried in Berlin hosting the 1936 Olympics.
Trolls gonna troll Boris, and you got owned. But so what for precious metals investors?
First, and for the hundredth time, politics rarely pushes up gold prices.
The UK is under attack very publicly by Russia's PR machine, if not by its spies.
Yet the gold price in Sterling has fallen amid this crisis, back towards its lowest since the 2016 Brexit referendum...as the Pound rallies on hopes for a workable Brexit deal.
Second however, gold can affect politics. And seen from here at BullionVault, there's a certain golden irony to "strong man" Putin's victory last weekend.
That's because this week marks half-a-century since the height of the Cold War saw the free market defeat the alliance of Western central banks...
...forcing the London Gold Pool to throw in the towel...
... shuttering all bullion trading in the world's central market for a fortnight...
...and ending the US, British and German policy of selling gold from their national reserves...
...having vainly tried to keep gold priced at $35 per ounce, then the key anchor point for the post-WWII monetary system...
...and so tolling the death-knell for fixed exchange rates...
...also marking the last gasp of British Pounds as the world's ex-No.1 currency. Because when the London market re-opened on 1 April 1968, the world's daily benchmark price was then set in Dollars, not Sterling...
...and ultimately leading to the central banks' slow retreat from hoarding gold which picked up to peak and then reverse as gold prices rose in the first decade of this century.
Fast forward to here in 2018 in contrast, and the West's old foe of Russia has now been the heaviest central-bank gold buyer for six years...growing its bullion reserves to 1,857 tonnes at last count...just behind China as the sixth largest national holder.
Gold prices have fallen by one-third over that period, at least in US Dollar terms. But the metal has risen against the Ruble...hit first by falling oil prices and then by sanctions against Moscow's actions in Ukraine and Crimea.
The metal has also gained in political power for Moscow.
In 2005 Putin publicly approved a 10% target for gold in Russia's central bank reserves.
That level was reached in 2014. And since then, gold has risen to almost 18% of Moscow's foreign exchange holdings by value, according to data compiled by market-development organization the World Gold Council.
Right alongside, Russia has been increasingly locked out of the global banking and financial system, with its world No.3 gold-mining output struggling to reach the international market.
So is it a coincidence that, since the Ukraine crisis first broke in 2013, Moscow's central bank has bought 70% of the country's domestic mine output? 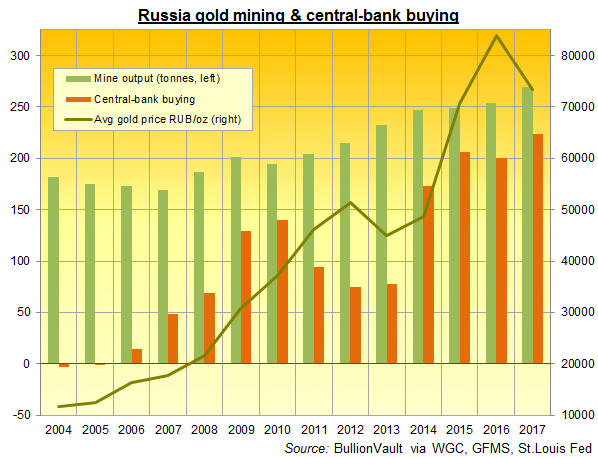 Swelling the Kremlin's gold hoard above 1,800 tonnes, greater even than the 1,400 tonnes held by Tsarist Russia just before the catastrophe of World War I, that has boosted Moscow's international currency reserves without needing an inflow of international currency.
All it cost was handing Rubles to domestic miners, who anyway found selling gold onto the global market more difficult thanks to tighter sanctions against Russia's commercial banks. Which was handy.
With or without your shirt on, clutching gold bars and vowing bigger gold reserves makes a certain political leader look and feel stronger. That's fair enough if you're at the wrong end of the United States' hypocritical, crooked and self-serving global policing policies.
But very often it also comes together with a rise of defiant, warlike rhetoric too.
Think of Colonel Gaddafi in 2011 or Hugo Chavez the same year, pulling Venezuela's gold reserves out of London and hoarding them at home instead.
All too often, gold is often associated with 'bad guys' because, all too often, bad guys use it first to show off their power...
...and then to try and fund their last, desperate stand.
What to make then of Hungary's decision to "bring home" its gold reserves – out of London – into the central bank in Budapest?
Hungary's 3 tonnes hardly dent the 7,800 tonnes piled up in London custody, heart of the world's wholesale bullion market.
And like some of Putin's well-wishers we listed above, Hungarian leader Viktor Orban also stands accused of trampling on freedom of the press, plus moving to outright racism in a worsening climate of nationalistic politics.
But against such quibbles and stretched connections, the trend of national governments wanting gold – and wanting to hold it close – continues to spread (albeit  less dramatically than the bug-o-sphere might suggest, and with a little more pushback too).
You might think that's a good and proud, powerful thing for the state.
Lots of people thought the same as World War One approached. No doubt including the angry little man with the Chaplin moustache.
Forty years before the guns opened fire in 1914, high noon for the global Gold Standard had in fact seen very little bullion held in the vaults of central banks. Privately-circulating coin totaled perhaps 3 times as much. But from around 1,100 tonnes in 1875, nationalized reserves rose 8-fold amid the dreadful approach of nationalism and the warfare state.
This hoarding for war and vaulting for victory only worsened after 1918, sucking ever-more gold into government control and barring the free circulation of bullion coin and, eventually, bar.
The "total war" of the 20th Century required a "total war" on freely held private wealth. Today's echoes – whether in the central-bank vaults of Moscow, Budapest, or indeed London – give little to celebrate.