END_OF_DOCUMENT_TOKEN_TO_BE_REPLACED

The end of the Gold Standard and the price of "total war"...

IT SEEMS AN ODD QUIRK of history that the US government's obsession with its nationalized gold reserves – an obsession which Ian Fleming neatly tapped into with Goldfinger in 1959 – came so long after what historians call the "classical" Gold Standard ended.

(Catch up with Part I, starring Richard Nixon as Auric Goldfinger, here...)

But the fact is, total world gold reserves rose almost five-fold in the five decades following 1914 – the start of World War I and the date traditionally given as the death of the international Gold Standard.

That system, running roughly between Bismarck's defeat of France in 1871 and the bloody stand-off at Ypres a half-century later, saw sovereign nations settle their balance-of-trade debts with each other in bullion. Gold really was money, and only gold (and, progressively less, silver) would do in payment.

And just like domestic cash transfers, the vast bulk of cross-border payments were made by private individuals using privately-held gold and fully-backed gold certificates. But as governments worldwide set about nationalizing welfare, health provision, pensions, insurance and the "commanding heights" of industry, so their nationalized gold reserves were also growing apace.

The Gold Standard collapsed not only into the mud of Verdun, in short, but also into state-owned and state-controlled gold vaults.

Put another way – as Texas Congressman Ron Paul did before the US House of Representatives in Feb. 2006 – "Though money developed naturally in the marketplace, as governments grew in power they assumed monopoly control over money."

That monopoly power has only grown stronger now paper and photons have replaced gold entirely as the world's means of exchange. Governments and their central-bank agencies set the price – and thus value – of what we now use to buy and sell, invest and spend. And since this control over money rests with politicians and bureaucrats, it's worth noting how the surge in nationalized gold reserves coincided precisely with the surge in nationalist politics, war-mongering and state controls that marked the first-half of the 20th century...a global growth spurt in government power that sparked World War One, before leading to the horrors of Nanking, Auschwitz, Stalingrad, Dresden and Hiroshima.

Rewind to 1875, however, and central-bank gold reserves "amounted to no more than 1,100 metric tonnes," wrote Timothy Green in a 1999 research paper for the World Gold Council, "while gold coin in circulation was approaching 3,000 metric tonnes." Private citizens, in other words, then held the vast bulk of the industrialized world's wealth, and the international Gold Standard – "a symbol of sound practice and badge of honor and decency," according to one historian – had begun by default, not design.

It was simply the way private individuals the world over chose to meet and exchange wealth. Nationalized money, at this stage, remained but a twinkle in the eye of would-be technocrats and tyrants.

Come 1895, however, and "of the 6,100 metric-tonne of monetary stock, central banks held around 2,750 metric tonnes," writes Green. "By 1905 the balance had swung in favor of central banks, who then had 4,710 metric tonnes of the monetary stock against private holdings of 3,916 metric tonnes." On the eve of World War One – after a three-year surge in government gold hoarding – sovereign states held some 8,100 tonnes in total.

This race to nationalize gold sped up again as the world struggled – and failed – to re-establish the classical Gold Standard after the big guns fell silent in November 1918. "The days of widely circulating [gold] coin were over," as Green goes on. "By 1929, central banks held an estimated 92% of all 'monetary' gold." The impact on politics, wealth and the world economy? It's been little examined to date; today's most ardent "gold bugs" fret more about central-bank gold sales and loans than about how that gold ever wound up in government vaults in the first place. But nationalizing the world's monetary gold stock saw governments take control of what had been freely exchanged as the final – and freely chosen – arbiter of wealth over more than 5,000 years.

And here at BullionVault, we don't believe it was any coincidence that the "total war" of the 20th century first required a "total war" on freely held private wealth. 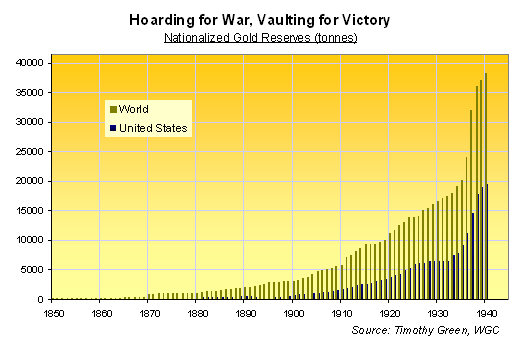 When the field guns withdrew and the poppies returned to north-eastern France in 1919, the economic disaster that followed only accelerated this nationalization of what had until then been privately-held money.

Gold was sucked into government vaults at an ever-increasing pace, while personal freedoms and liberty were vacuumed up by governments of all stripes – communist, socialist, national socialist and imperial. Mass unemployment, fascism and European re-armament saw a race to get gold and the power it brought under official control.

No bureaucracy seized control of this wealth more urgently than the United States. One evil day in 1933 – and just ahead of the Nazi government in Berlin annexing gold from the vaults of Czechoslovakia, Poland, Austria, Belgium and Holland, as well as from the Jews it murdered across central Europe – the US government actually made private gold ownership illegal, forcing people to sell their gold to the Treasury on pain of a $10,000 fine or imprisonment.

Not content with the tonnage he'd prized from American citizens, President Roosevelt then devalued the Dollar, slashing its value from $20.67 to $35 per ounce of gold and thus encouraging foreign-owned gold to pour into Washington's hoard at the new, higher price. All told, during the final nationalization of privately held Gold that swept the world during the 1930s, fully 60% of all new central bank gold ended up in US reserves.

The United States then acquired yet more gold during WWII, taking it from the British and Soviet state vaults in return for ships, tanks, food, boots, gasoline and warplanes. Its acquisition of gold continued even after the war, when "European central banks sold what little gold they had left to the US Treasury for badly needed dollars to rebuild their shattered economies," as Timothy Green explains.

At high tide, in 1949, the Treasury held more than 70% of all nationalized gold. Thus did the United States achieve the near-total annexation of the world's monetary gold stock. It coincided with America's financial and political pre-eminence worldwide – a dominance which continues today.

Inside the US, privately-held gold remained illegal until 1974. Outside it, central banks hoarded dollars – just as in 2008 – alongside their gold. The two were fully convertible, after all, under the post-War Bretton Woods settlement...if only for central bank ambassadors, rather than private citizens wanting to swap paper for gold.

John Maynard Keynes – chief architect of the new "Gold Exchange Standard" – was so pleased with the potential wonders of this Dollar-gold system, he twice jibed that the metal represented a "barbarous relic", a prehistoric superstition than mankind would do well to abandon.

Fifty years later – as the blood-soaked 20th century finally drew to a close – the world very nearly achieved that feat. But only nearly.