END_OF_DOCUMENT_TOKEN_TO_BE_REPLACED

"My God, this is the time. If everyone wants Gold we're all going to be ruined..."

ONCE UPON A TIME money meant gold (and ever less silver), freely exchanged between private individuals looking to buy and sell, invest and spend.

But then came the 20th century.

There had been experiments with "fiat money" before, of course – most famously in 13th century China, 18th century France and Civil War America. Paper was issued as currency without gold (or silver) to back it. There was just a promise – dictated by emperors, kings and army commanders – that other people would accept it in payment. The foot-soldiers would make sure of that.

So you'd better accept it, or else. Hence the name "fiat" – from the Latin – meaning "Let it be done".

But the world refused to let paper money just be, however. Whenever fiat replaced gold by government diktat, things always seemed to end badly. Not even the gallows can support faith when confidence fails. And confidence in un-backed paper had always failed before.

Hence the complaint of many eloquent gold owners today: the 20th century saw politicians conspire to do the impossible, over-reaching mankind and replacing gold with the Dollar. It can't and won't last, runs the theory, based as it is on every previous attempt to keep gold from acting as cash. So any bounce in the Dollar out of its ultimate down-trend must signal dark forces at work...diabolical meddling in the free market for Gold.

The battle, these so-called "gold bugs" would claim, is between man's paper promise and nature's true money. And eternal truths will out in the end. That's what makes them eternal.

But it's worth bearing in mind – now the 20th century's ended, if not quite shuffled off – that the Dollar only became the world's No.1 money because the United States owned pretty much all of the gold. As the radio-active dust cleared at the end of the Second World War, Washington controlled well over two-thirds of the world's entire monetary gold stock. Gold crowned the Dollar, or rather, an odd new form of gold did.

It was kept in deep storage, safe and secure from private decisions and personal choice. Heaven forbid that voters should have control of this wealth! They'd only send it abroad to settle their debts...or acquire shiny new toys...or hold government debt to account by refusing to lend gold in the future. The White House was buggered, to apply that quaint English phrase, if it was going to let gold slip back into private control.

Better by far to give people paper to trade with, and hold all the gold – that final arbiter of value, used for over 5,000 years – against whatever Evil Days might soon return.

"The period of economic nationalism between the two world wars saw a rapid concentration of gold in official hands," explains the World Gold Council in its excellent history online. "Up to that point [meaning the mid-1920s], most gold had always been held privately, circulating as currency among citizens and across borders in commercial trade transactions."

But now Gold, "which had been the foundation of the first genuinely international monetary system during the period before WWI, came to be used as a weapon in economic competition and national rivalries."

Even after the Great War finally ground to a halt, a mile or two above Nagasaki (Churchill would call it "a new Thirty Years War"), those national rivalries still depended on gold being controlled by the state. 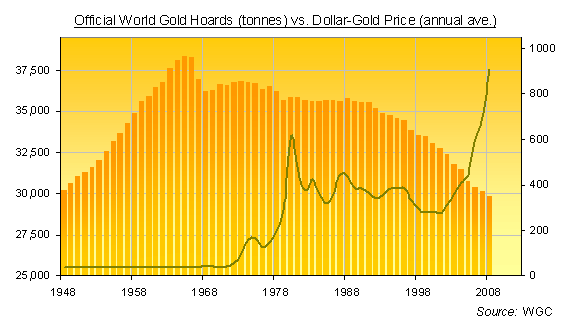 Peace in Europe – if not in Asia – didn't yet make those gold stocks redundant. World trade and cross-border loans were still regularly settled in gold, most especially between the "free West" and the Soviet bloc.

Spring 1964, for example, saw communist Russia fly a fleet of Aeroflot TU-114 airliners into London and Paris, packed full of gold bars – all stamped with the hammer and sickle and destined for North America.

The gold bought "huge purchases of Australian, Canadian and US wheat," as Time magazine reported. But a far greater flow of gold bullion was going in the other direction, shipped first from Fort Knox to New York before waving farewell to the United States and sailing East across the Atlantic to France, Britain and other apparent allies.

"My God, this is the time," President Kennedy had said to then-chair of the Federal Reserve, William McChesney Martin, two years before. J.F.K. paraphrased what the Europeans might be thinking – or rather, their elected leaders in power.

"If everyone wants gold we're all going to be ruined, because there is not enough gold to go around."

What was there was in abundance, however, were US dollars. Millions and then billions of the damn things, piling up at the Banque de France in Paris as well as in London, Frankfurt, Tokyo...

But then, this was always the plan under the Bretton Woods scheme. Aside from settling international debts between states, "the Dollar was demanded by foreign nations both a [central-bank] reserve asset and to finance much of the world's trade," writes Francis Gavin in Gold, Dollars & Power.

"This demand for American dollars," Gavin goes on – which the United States was only too happy to meet with freshly printed notes – "was in excess of the demand for American goods. In other words, some of the [balance of payments] deficit might not actually be a deficit at all, as those dollars were desired, at least for a time, by central banks and entities involved in financing trade."

Now roll forward to 2008, and the United States' deficits – still paid in that "exorbitant privilege" as President Charles de Gaulle of France called the Dollar – are once again piling up in central bank vaults. This time, however, there's no hope of flying to Washington and asking for gold in exchange. Richard Nixon got rid of that clause, killing the Bretton Woods deal and setting free the gold price in 1971.

The poor central banks now drowning in Dollars are different, too. Caught with no hope of swapping their paper for gold, might China, Japan, Russia and South Korea not move to Buy Gold in the market instead?

Let's hope not. Really. It wouldn't be fun...not even for "gold bugs".

"Countries facing particular volatility in their economic and/or political circumstances will want to consider the level of gold in their reserves," as the World Gold Council says. But equating strong gold reserves with a strong international position is to cast nationalized gold as a good thing in itself...rather than as a truly barbarous relic of 20th century nationalism, state control, and all the horrors they wrought.

Here in Europe, the over-blown state bureaucracies that seized control of privately-held gold between 1900 and 1965 now keep around one-half of their foreign currency reserves in gold bullion. The United States – outright winner of the 30 years "total war" in 1945 – holds fully three-quarters of its nationalized cash hoard as gold. The international average, thanks to the weight of these first-class gold bugs, sits nearer 10% on most analysts' math.

So "it's important to recognize," claims a story on Seeking Alpha, that if China, Japan and Russia took gold bullion to 10% of their central bank reserves, it "would require a purchase of approximately 9,300 tons of gold...or the [world's] entire gold [mining] production for the next 4 years."

Far more important to recognize, however, is the fact that such a move would presage a new total war...a shooting match requiring a much grander name than merely "World War Three".

Governments Buy Gold – and lock it away from private decisions and choice – when they fear other nations. Fear on that scale is never much fun, not even for gold bugs. It would prove less fun again if (or rather, when) the race to hoard government gold turned into an absolute ban on private ownership.

It happened to US gold-owners in 1933. Most citizens of the "free" world were barred from owning gold freely, within their domestic borders, until the late 20th century.

This driving fear, late in August this year, led the German Bundesbank – owner of the world's second-largest nationalized gold hoard – to reject calls from politicians and newspaper editors in Berlin to sell a portion of its 3,000-tonne stock. They wanted the sales to fund economic stimulus, but "national gold reserves have a confidence and stability-building function," the central-bank answered.

More tellingly, "this function has become even more important," the Bundesbank added as Russian tanks rolled into Georgia, "given the geopolitical situation and the risks present in financial market developments." And more telling again, the Gold Bullion held by the Russian central bank grew by more than 50 tonnes in the 12 months to July 2008 – a sudden and sharp increase in its reserves according to official data.

As it is outside the Caucasus, meantime, long-run bull markets in Gold rarely suffer when central banks sell. Between 1976 and 1980, the International Monetary Fund (IMF) sold one-third of its total gold holdings – a massive 1,600 tonnes.

The price rose eight-fold regardless.

Again in 1999-2002, the United Kingdom and Switzerland sold another 1,600 tonnes between them. Yet all they achieved was to kick-start the current bull surge! So if they had hoped "to reduce the role of gold in the international monetary system" (as the IMF put it, twenty years earlier) then their failure should point even the most ardent gold bugs to a curious thought.

The Central Bank Gold Agreement (CBGA) – first signed in Sept. 1999 – marked the end of the 20th century for gold. Instead of nationalizing and hoarding the stuff, fifteen European states announced they would slowly drip-feed gold back into the market...releasing it into private hands after almost 100 years of the opposite policy.

Renewed in 2004, the current CBGA will see its fourth year expire three weeks from now (Friday, 26th Sept.). But the central-bank gold sellers are now way under quota...a full 170 tonnes short of their 500-tonne ceiling by the reckoning of our friend, Julian Phillips at GoldForecaster.com.

What if they got moving, and played catch up quick-smart? Genuine free-market believers the world over might wish that they would.