END_OF_DOCUMENT_TOKEN_TO_BE_REPLACED

Bank of England bullion custody shrinking...
CENTRAL BANKS bought a record quantity of gold this summer according to a new estimate, but public data show a more muted picture, with holdings at the Bank of England in London – heart of the global bullion market – actually shrinking instead.
July-to-September saw record quarterly gold purchases by the central-bank sector, today's estimate from the mining industry's World Gold Council says, putting the figure at just over 399 tonnes.
Equal to more than 2/5ths of global gold-mining output over the period, that number far exceeds the 120 tonnes formally reported for the third quarter of 2022 by central banks themselves.
The higher number includes "a substantial estimate for unreported buying," says the World Gold Council, "not uncommon as not all official institutions publicly report their gold holdings or may do so with a lag."
"There is no evidence of this large buying in price action," says Nicky Shiels, head of metals strategy at Swiss bullion refining and finance group MKS Pamp, noting that gold fell from $1800 per Troy ounce to $1625 in the third quarter of 2022.
So rather than these purchases coming through the open market, "It's probably just Russia or China taking in their own [mining] production, or one of the non-Western countries happily taking gold in from Russia (at a discount), given sanctions.
"[Either way] the de-dollarization theme continues out East!"
Separate data from the Bank of England – the 2nd largest custodian of foreign central-bank gold after the New York Federal Reserve – says that the quantity of gold in its London vaults continued to shrink in Q3, down by 189 tonnes.
For the year ending 30 September, total central-bank gold holdings grew by 711 tonnes on the World Gold Council's new data, while the quantity held at the Bank of England fell by 451 tonnes and the NY Fed's holdings earmarked for foreign central banks was unchanged. 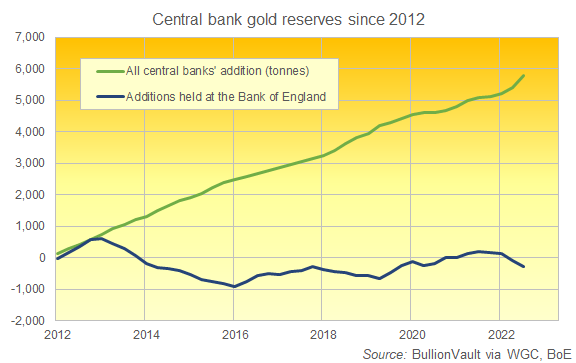 The world's No.1 gold-mining nation for the past 15 years, China has not confirmed any central-bank purchases since a brief period of monthly compliance with International Monetary Fund reporting requirements in 2019.
World No.2 miner Russia has meantime not reported any changes in its central-bank gold reserves to the IMF since January this year, and its reported holdings haven't changed in size since the Covid Crisis of March 2020 saw the CBR suspend domestic gold purchases as it used foreign-currency reserves to try defending the Ruble's FX value amid the collapse of oil prices – source together with natural gas sales of 1/5th of the country's annual economic output.
This year's imposition of Western sanctions against Russia over its invasion of Ukraine would see the CBR return to accumulating gold, said Metals Focus – the specialist consultancy producing today's numbers for the World Gold Council – in a forecast this May.
That would mark a repeat of Moscow's strategy of buying domestic mine output during the Western sanctions of 2014-2018 over Russia's illegal annexation of the Crimea. Supporting both the CBR's foreign-exchange reserves and a key Russian industry by spending Rubles for bullion, the central bank bought more than 85% of the country's total gold-mine output over that period.
But "this is at the present moment inexpedient," said the CBR's deputy governor Alexei Zabotkin in mid-October, rejecting a request for state support from the Russian Union of Gold Producers and warning that spending Rubles for domestically mined gold would "create additional momentum towards growth in the country's money supply," thereby fuelling inflation in the cost of living.
Stating that "directed support for individual sectors of the economy is not within the mandate of the Bank of Russia," Zabotkin did however say that the CBR had bought gold at the start of the latest Ukraine-sanctions crisis in March and April, aiming to "stabilize the situation" without formally reporting those purchases.
Russia has accounted for 29.3% of global central-bank gold accumulation over the last decade, ahead of Turkey (18.9%), China (18.5%), Kazakhstan (6.2%) and India (4.7%).
The heaviest seller, shedding some 204 tonnes since the start of 2012, Venezuela continues to be in dispute with the Bank of England over some $2 billion in gold bullion held in London but blocked by international sanctions over the elected president Nicola Maduro's corrupt and murderous regime.
Last month the Commercial Court in London gave the Banco Central de Venezuela permission to appeal a decision made in the High Court earlier this year (and made by the self-same judge) once again backing the BoE's contention that in keeping with UK Government policy it must recognize the would-be Government of opposition leader Juan Guaidó.