END_OF_DOCUMENT_TOKEN_TO_BE_REPLACED

'Modest' growth forecast for official-sector total...
DUE to the current political and economic turmoil worldwide, central banks are expected to show only a "modest" increase in their gold buying following last year's rebound according to leading analysts, writes Gabriela Daurignac at BullionVault.
This 2022 growth will primarily be due to the return of Russia buying gold amid Western sanctions over its invasion of Ukraine, with central banks in "many [other] emerging markets...struggling with headwinds from soaring energy and agricultural prices," says specialist consultancy Metals Focus.
The gold market saw a strong start to 2022 overall, with total demand increasing to 1,234 tonnes during the first quarter according to Metals Focus' data, above the 5-year quarterly average and the highest since the last quarter of 2018.
Central-bank demand below 84 tonnes was however 28% weaker than its 5-year average.
The new Gold Focus 2022, launched this week by Metals Focus, says that central bank gold buying saw a recovery last year from the slump of 2020, with net purchases almost doubling to 455 tonnes but still remaining 11% below the past decade's historically high annual average. 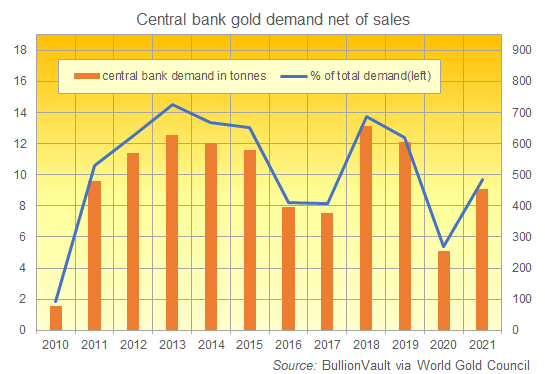 Faced with crisis in 2020 as the Coronavirus pandemic began, central banks became reluctant to buy gold as their foreign currency reserves came under pressure and bullion prices jumped.
Demand then came back in 2021 but held below recent averages as Russia – the No.1 gold buyer over the last 10 years – continued its gold-buying break.
2022 now finds 25% of central banks looking to buy gold this year according to a survey published this week by the mining industry-backed World Gold Council. This shows a rise from 21% in the 2021 survey.
"In the face of a more challenging economic and geopolitical environment," says the World Gold Council, "central bank gold demand is likely to remain robust, with gold's safe-haven and inflation-hedging qualities serving to foster stronger conviction among central banks towards gold."
However, the number of central banks saying they plan to buy gold shows little relationship with the following year's actual outcome. For instance in 2018, central bank gold demand was the highest in 50 years, but only 18% of respondents to the World Gold Council survey said they planned to buy. In 2020 in contrast, 20% of central banks said that they planned to buy more gold, yet that year saw the sector's lowest demand since 2010. 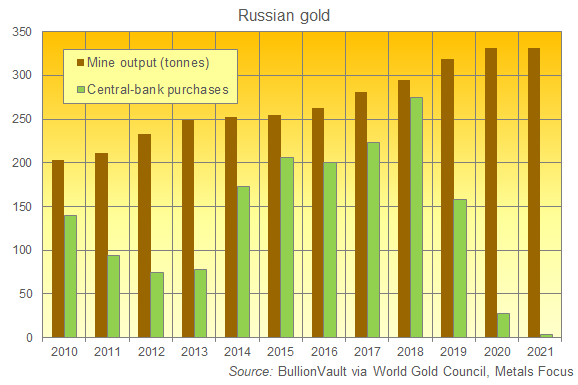 Over the last 10 years, Russia's official gold buying has accounted for 31% of total global central-bank demand.
That trend accelerated starting in 2014, when Russia was hit by Western sanctions due to its invasion of the Crimea and the central bank in Moscow stepped in buy 82% of Russia's gold mining output – now the second largest in the world, but forecast by Metals Focus to drop by 1/10th in 2022.
In April 2020, Moscow temporarily suspended its gold buying due to the crash in energy prices and the slump in the Russian Ruble's exchange rate resulting from the Covid Crisis, resuming small purchases in July 2021.
With Russia being such a big part of the central-bank gold market, it is difficult to predict the shape of 2022 demand says Metals Focus in its new report.
However, the Central Bank of Russia has already resumed purchases in the domestic market using Rubles – repeating the pattern seen during Western sanctions over Crimea – and "Even allowing for a steep rise in retail investment in Russia, the bulk of its gold mine production (around 300t in 2022) may still need to be absorbed by the CBR," says the new Gold Focus.

Gabriela Daurignac is working as a research assistant at BullionVault, the No.1 gold and silver ownership service for private investors.