END_OF_DOCUMENT_TOKEN_TO_BE_REPLACED

Remonetization of gold set to run in 2020...
"GOLD," writes our friend John Stepek at MoneyWeek magazine, "is the only currency in the world without a central bank behind it," says Adrian Ash at BullionVault.
Bitcoin boneheads would no doubt argue with that as they hodl and toddle through life not spending something else with no central bank that no one is using as money either.
But ignore the crypto-krapto. Because you could in fact say gold has had many central banks behind it over the past decade. "Right behind you!" screams the gold-suppression crowd. But the official sector actually pushed gold through the doldrums of 2015-17, before helping to send it flying in 2018 and 2019. 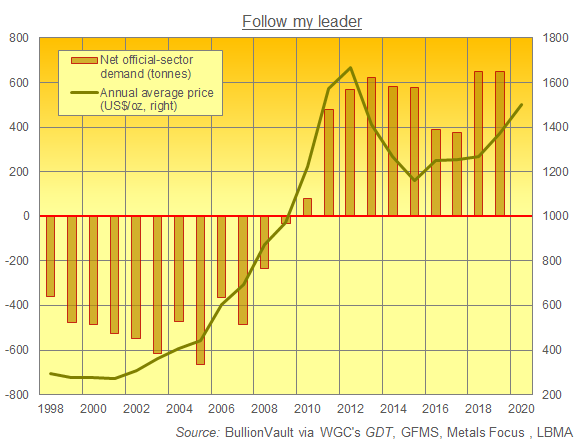 Chickens, egg, carts, donkeys, whatever. Central banks as a group dumped gold at rock-bottom prices, then they turned net buyers a decade ago at $1000 and above, and they haven't stopped since.
Not until gold broke above $1500 at the turn of this new decade. Now up here at $1600 per ounce and above, central banks have apparently gone AWOL according to bullion bank dealers. One desk says a pullback to $1500 was already needed, even before this month's Covid-19 surge in old yellow, to see if the official-sector bid was still there.
Big buyer China certainly held off in January (or so the PBoC said in its official data), and monster-buyer Russia – after hoovering up nearly all of its own world No.3 domestic mine output since 2015 – still doesn't want to buy so much, not after cutting annual purchases by two-fifths already last year.
Why so suddenly shy? Record-high prices make gold both more expensive to buy and also a bigger weight in the existing portfolio. And with bullion already standing as Moscow's 3rd largest asset after Dollars and Euros, Reuters quotes one economist, so "the central bank's need for gold is declining."
Which is lucky. Because gold's need for central banks has also declined amid 2020's geopolitical chaos to date. 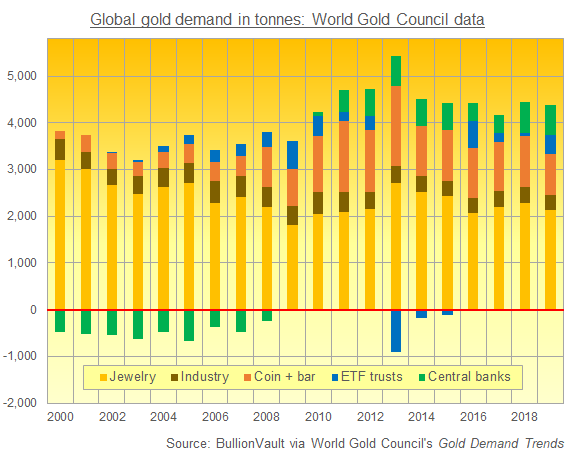 Outside ETF investment and central banks, worldwide gold demand last year hit its worst level since the economic slump of 2009.
It had only swerved that in 2018 thanks to official-sector buying almost doubling from 2017, up to its heaviest in 50 years (before 'Tricky' Dicky Nixon gave the world the goldfinger in 1971 and cut the Dollar free from any physical backing).
On top of those central-bank buyers, big investors then returned as well in 2019, as shown by the jump in gold-backed ETF holdings. Add the market's overall 'surplus' in fact – the gap between visible supply and demand on the best available data, effectively showing what's happening with large bullion bars privately-owned in secure storage – and vaulted-gold demand last year set a new 21st Century record, very likely the strongest since the 1970s or before.
The outcome? New Year 2020's surging price, of course. Because in gold, investment always leads and consumers just mirror, hoarding all they can get when gold falls or selling for what they can get when it spikes.
Consumer demand sure looks set to suffer worse still in 2020, thanks to coronavirus spooking households worldwide as it shuts shopping malls across No.1 market China, while political violence hits No.2 India, and gold prices everywhere set multi-year or new all-time record highs.
What next? Thanks to Covid-19's smack to growth and sentiment, "Pretty much every central bank in the world is currently biased towards lowering interest rates or printing money," says John Stepek at MoneyWeek:

"Therefore it's no surprise that every currency in the world is falling against the one that isn't backed by a central bank.
"That doesn't look like changing any time soon."

Bottom line? Gold so far in 2020 hasn't need central banks to plug the gap left by falling household demand, because a key reason for that plunge – the surge of investment demand driving up prices– has taken over instead.
Nothing's guaranteed, of course. But weaker consumer demand looks nailed on, because the re-valuation of gold as a financial asset – a 'remonetization' if you prefer, starting back at the trinket prices of 1997-2003 – only looks set to continue.