END_OF_DOCUMENT_TOKEN_TO_BE_REPLACED

Gold's 2016 bull run has finally become the consensus call for analysts, pundits and forecasters...
'BLACK SWAN' has become a very over-used phrase, even amid 2016's relentless shocks and surprises, writes Adrian Ash at BullionVault in this note first sent to Weekly Update readers last Monday.
Maybe 'grey goose' would be better. Or simply Daffy Duck...just to describe this year's manic intensity.
Either way, 2016 has brought a slew of events few people imagined, and fewer still thought possible...let alone likely...and certainly not all at once.
As one wag says, if you have a friend now waking up after a year in a coma, start with Leicester winning the English football Premier League at odds of 5000-to-1, and work up slowly from there.
Then ready yourself for more low-chance yet inevitable shocks ahead.
An ancient, male chauvinist joke meaning something so rare, it is in fact impossible (everyone in Europe knew swans only came in white), the Black Swan became a popular pub name in England in the 15th to early 17th centuries.
Marketing hype is nothing new, in other words. But a live black swan became a very real novelty in 1697, when Dutch explorers found a river full of the birds as they navigated into Australia.
Things you can barely imagine, in short, do happen. The issue to deal with is how the shock will affect you.
Amid all the politics, slaughter, upsets and rage in 2016, perhaps the least shocking black swan for investors so far has been the turnaround in gold and silver prices.
But spurred by the US Federal Reserve's apparently stunning failure to raise interest rates from the 0.50% it finally reached last December however, this sudden bull market in precious metals certainly caught the entire finance industry off guard, including most specialist bullion analysts.
Gold would fall below $1000 by March, said last year's best forecaster, Bernand Dahdah at French bank Natixis as the New Year began.
Instead, he now says it could reach a high of $1750 per ounce sometime next year.
Gold would end 2016 at $900 reckoned Dutch bank ABN Amro in January.
Now it's raised its gold forecast yet again, targeting $1350 for December...with a rise to $1450 next year.
US bank Citigroup's chief economist Willem Buiter famously called gold nothing but a "6,000-year old bubble". But now he thinks gold "looks pretty good"...
...because we now live "in times of uncertainty and especially in days of uncertainty laced with negative [interest] rates."
And as for money managers and hedge funds...they were betting against gold prices rising as 2016 began.
Last week, they trimmed their bullishness to what had been a second new all-time record high in a row when they first got there at the end of June. 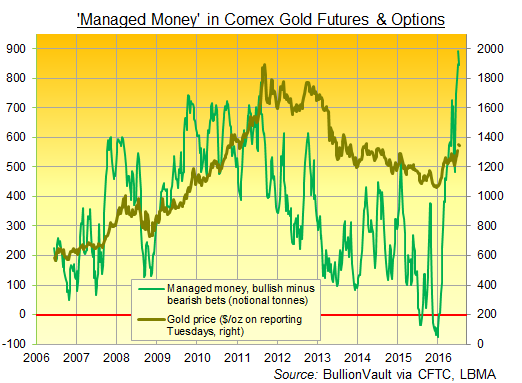 Such bullishness should make existing owners a bit nervous, as long-term gold and silver investors won't need reminding.
Gold peaked on the morning of 6 July...losing 3.5% for US and Euro investors since then, and dumping almost 7% for UK investors...just as everyone agreed that this bull market is so rock-solid, it cannot be "jinxed".
But the back-half of 2016 sees gold and silver starting from a very different place from New Year. Panics and surprises like Turkey's attempted coup will now be expected to send gold prices soaring...causing lots of hmm'ing and haw'ing if they don't.
Disappointment is highly likely for precious metals' newly bullish bears. That should give longer-term investors running their own money...and managing their own risk...a chance to build their holdings as the backlash begins amongst disappointed headline writers and embarrassed analysts.
Inflation, meantime, remains a fantastical beast which central banks, money managers, governments and the vast majority of savers just cannot imagine.
If this year's black swans are to turn truly financial, watch the sky for a fast-rising cost of living.