END_OF_DOCUMENT_TOKEN_TO_BE_REPLACED

IS THERE anything easier than making fun of "gold bugs"? asks Adrian Ash at BullionVault.

You see, the "bottom is in" for gold.

That's what one wag says of this article from Bloomberg columnist Joe Wiesenthal.

"It's time to officially bury the school of thought that's always warning about Dollar debasement and inflation as a result of money printing."

"Gold over the last 10 years is up about 10%. [Yet] during that time we've run large deficits...some of the biggest fiscal stimulus of all time...[and] the Fed's balance sheet rose to nearly $8 trillion from under $3 trillion.

"Inflation has [meanwhile] been mild, contra to what all the Goldbug Macro types would have predicted." 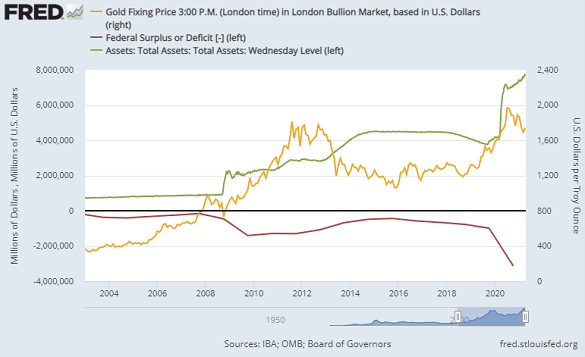 The US government has gone crazy both for deficit spending (the plunging red line) and also for central-bank money creation (the surging green line).

...and all while growth in the US cost of living held below 2% per year with the weakest underlying inflation since the mid-1960s.

Upshot? Those 'Goldbug Macro types' have been proven wrong once and for all, says Wiesenthal. Governments can borrow and spend with impunity. Even if they can't, your shiny yellow metal is pointless.

First, calling the idea that persistent money-inflation will devalue each unit of money a 'school of thought' is both too much and too little all at the same time.

It gives that handful of big-mouth cheerleaders and salesmen on YouTube too much respect...even as it belittles the history of every devaluation which has ever eaten savers alive.

Pointing to a chart of the US central bank's balancesheet and saying that gold prices should track it exactly is absurd. Same goes for gold vs. inflation, gold vs. the federal debt, or the number of people who fall into a swimming pool vs. the number of films starring Nicholas Cage (strongly positive r-coefficient of 0.66 from 1999 to 2009).

But runaway deficit spending financed by government money creation has repeatedly resulted in monetary crisis. The fact that it hasn't yet killed the modern US Dollar suggests either that the money creation since 2010 is trying to fill a bigger hole of deflation than anyone guessed, or that we all just need a little more patience.

Second therefore, the timing of Bloomberg's story begs a cheer and round of applause from irony, because the US is now moving to a whole new level of deficit crazy...

...spending $1.9 trillion on Covid relief plus $2 trillion or more (if President Biden gets his way again) on infrastructure repairs and upgrades.

As a result, the world and her fund manager also now fear inflation is about to take off. Because where 'austerity' followed the global financial crisis (albeit austerity with a multi-trillion price tag), 'recklessness' looks the watchword for 2020s' governments...

We've written a lot about the 'base effect' of last spring's Covid Crash in commodity prices. But if the rally in raw materials and longer-term borrowing costs doesn't fade by mid-summer, watch out.

Crude oil has already jumped $45 per barrel from this time a year ago. Come 20 April, anniversary of it going below zero as Covid crushed demand worldwide, that will jump towards $100...

...beating even the year-on-year $80 surge of summer 2008 preceding the wipeout phase of the global financial crisis. 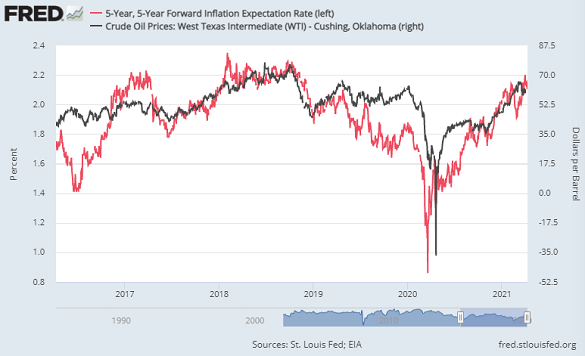 Back at Bloomberg though, there's more.

"Not only has gold performed poorly," that column goes on, "the Dollar is still dominant."

This last laugh-in-the-face-of-straw-men-goldbugs is debatable to say the least.

Sure, the US Dollar is still the world's No.1 currency for trade, investment and foreign reserves. Sure, the single-currency Euro and much less the Chinese Yuan stand ready to take over as the source of global debt and therefore liquidity any time soon.

But that word "still" is doing a lot of heavy lifting.

End-2020 in fact saw the US Dollar's share in currency reserves among central banks worldwide drop to 59%...

That brief 6-year surge coincided with Bill Clinton's White House pushing the US Treasury into a budget surplus for the first time since 1969.

But the last 20 years then saw the US run non-stop and ever larger budget deficits, spending more than it collects in tax and funding the rest by borrowing from the bond market...

...including foreign central banks and investors...

...and of course from the United States' own central bank as well.

Over the last decade meantime, the proportion of US federal debt financed by non-US bondholders has fallen from one-third to one-quarter...

...the lowest proportion since summer 2007, eve of the global financial crisis.

The US Federal Reserve in contrast now holds 18.5% of that debt...

...the largest proportion ever. 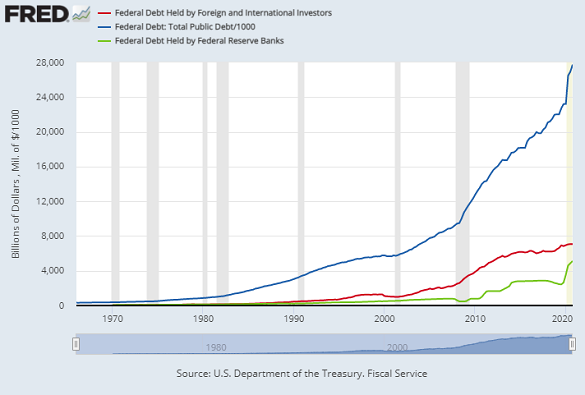 None of this is to dispute the point that a lot of goldbug stuff you might find on the web is dreadful, misleading at best and dangerous to your money if not.

Nor does spotting or guarding against a possible currency crisis make it any easier to take profits in gold...and switch into bombed-out business assets at rock-bottom prices...when a crisis really does hit.

But the jury is still out on the US Dollar's dominance and stability, just as it is on Washington's ability to borrow and spend via central-bank QE without limit in either time or scale.

Put another way, "How did you go bankrupt?" as one drunk asks another in Ernest Hemingway's The Sun Also Rises.

For those of us trying to get sober, the Goldbug Macro so abused by Bloomberg is only one school of thought for holding a little bullion alongside everything else storing your savings.

Most needful, barely remembered, but probably most urgent right now?

Not that anyone does or need care about that. Right?