END_OF_DOCUMENT_TOKEN_TO_BE_REPLACED

Forget wipe-out inflation and mass credit default. There are plenty of unscary reasons for Gold Investing too...

Gold Investing is for the loons, writes Adrian Ash at BullionVault – the kooks and monetary nuts, apparently – those doomsdayers who, bothering to read history, think printing money risks massive inflation, and who also fear banking default too much to hazard every last penny of their savings on a deposit account.

As we've learnt since the record peaks of summer 2011, gold does much more than go up in a straight line. But that's why it's also for other folk too – better-paid, less wild-eyed folk like professional investors. Or at least it would be. If only they studied the data, like the doomsdayers read history, when they decide their asset allocation.

"Asset allocators at major retail [investment] firms have their equity weighting the lowest in over 15 years," reckons David Lutz at Stifel Nicolaus, which itself runs some $126 billion in assets – "well below 2009 levels." It's the same story in Europe, and in the City of London it's samer still. "UK pension funds have less invested in equities than at any time since the 1974 stock market crash," reports the Financial Times, citing Swiss bank UBS's Pension Fund Indicators 2012 report and pointing to the average fund's 43% investment in listed shares, down fully 7 percentage points last year from 2010.

So where are pension-fund and wealth managers putting your money instead? Not into Gold Investing, that's for sure. Overall, institutional asset allocations to gold remain at perhaps 0.3% in the rich West. Yet two-fifths of international wealth managers were out-of-step with their model allocations at the end of 2011, according to Scorpio Partnership's latest private-client portfolio survey. But instead of shifting that money from stock-market fixed-income bonds into, say, physical gold, they've been growing their cash positions.

This dash to cash makes sense, perhaps, amid the ever-swelling Eurozone crisis. But given the likely response of central banks (money printing) and governments (deficit spending), surely the end-client's inevitable loss of real spending power demands a second look. Never mind the end-client's loss of potential gains in higher-risk assets. Put another way, this reckless caution has "two potentially detrimental repercussions," notes a new report from the World Gold Council, market-development organization for the gold industry – "the stagnation of capital due to lack of income and even negative yields [plus] the concern that monetary stimulus eventually leads to unavoidable and problematic inflation."

No, we're not back to gold bugs warning about quantitative easing and inflation. Not yet. Rather, the World Gold Council's analysis points to gold's value in a diversified portfolio. Because nothing adds quite the diversification that gold does, as this new research shows.

First though, why might diversification matter? The finance industry employs it not only to charge more fees for tweaking allocations here, or bill you for cycling into fresh asset classes there. No, it's because unless you can see the future, you cannot know which investments are going to perform next year or beyond, as the famous Callan Periodic Table shows plainly. This year's winners may well win again; Emerging Market Equities did for 5 years straight in the middle of last decade. But then that winner could just easily sink to last place, dropping 53% of its value, as Emerging Market Equities did for Dollar investors in 2008.

So how has Gold Investing performed against the 9 key indices tracked in the Callan table? Adding gold takes the tally to ten, of course. And gold's average position over the last decade has been 3.8, second only to those Emerging Market Equities, but coming second and first in 2008 and 2011 respectively – when EM stocks sank to last place. 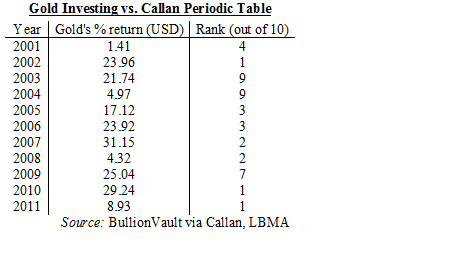 But back to the World Gold Council's new research, and speaking directly to asset managers running UK money – and whose clients are thus exposed to the Pound Sterling's relentless loss of purchasing power over time – "Gold is a highly effective vehicle for diversification and risk management," says their latest analysis, "because of its independence from other asset classes."

That independence comes thanks to gold's role as a savings vehicle worldwide, a consumer luxury in the West, must-have household asset in Asia, and continued industrial input – especially in electronics today. That last element accounts for only 15% of annual demand by weight, however. So Gold Investing prices aren't exposed to the economic cycle in anything like the way that base metals, energy or other commodities are. "The unique dynamics and geographic mix of supply and demand for gold," as the World Gold Council's report notes, "mean that its price performance typically behaves quite differently from most other assets." And never more usefully than when stock markets sink. 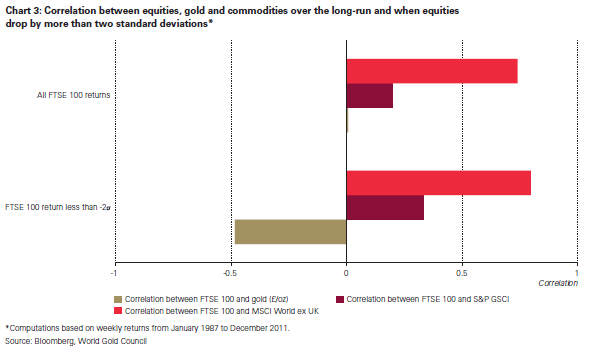 Correlation is a measure of how closely two different asset prices match each other's moves over time. A reading of +1.0 means they move in lockstep, while a reading of –1.0 means they move exactly opposite. And as the chart shows, a sharp drop in London's FTSE 100 stock index – a weekly drop twice as large, in fact, as its average week-on-week range – has been matched over the last 25 years by a higher correlation with both global stock markets and commodities.

Trying to diversify your UK equities with global stocks or raw materials, in other words, hasn't paid off. Not when the FTSE fell. But gold, in contrast, has become negatively correlated with the FTSE 100 – moving in the opposite direction – right when you needed it most, when London shares fell.

There's more, much more, in the full report, including a range of asset allocation levels tested across 25 years of data. (You can download it with a free registration here.) The upshot is that Gold Investing is worth much more than a glance for UK portfolio managers, just as it is for US Dollar and Euro managers too. Because even without the global volatility between credit-boom and crisis-bust suffered over the last 10 years, longer-term analysis shows that gold makes a unique diversifier. If your pension-fund or wealth manager doesn't see the risk of massive inflation or widespread credit default, they might still want to consider Gold Investing as part of their asset allocation all the same.