END_OF_DOCUMENT_TOKEN_TO_BE_REPLACED

What do bullion experts forecast for next year...?
SPARE a thought this Christmas for the poor bullion-market analyst, writes Adrian Ash at BullionVault, picking up where he left off last week.
Slaving all year over spreadsheets of Shanghai gold premiums, ETF flows and Comex positioning, for them the season of goodwill brings a high-risk yet thankless task...
Forecasting where the gold, silver and platinum price will head over the coming 12 months.
Get it badly wrong, and the analyst could hurt their career prospects.
Get it right, and they might at best win a grudging nod from their peers in the LBMA's annual forecast competition (plus a gold coin for their trouble)...
...before next December brings the same unforgiving task again and again.
Even if an analyst is convinced their forecast will come good, they might not be able to make it. Not if they work at a bank.
Because like their colleagues trying to forecast stock markets, crude oil or bond prices, they have to start with the bank's official view on key issues. They aren't allowed to disagree over the macro outlook. They have to build out a 2019 outlook using the bank's base-case.
As a private investor, you are spared such hassles of course.
All that's at stake is your own money...plus perhaps a comfortable retirement.
Back with the professionals meantime, where do the early runners and riders see 2019 gold prices?
Up says Commerzbank in Germany. Down says Australia-based Macquarie.
Both point to the same key issue driving the bullion market...the same issue as everyone else, in fact.
The difference lies in how they (or rather, their bank) see that factor changing.

"Precious metals prices are likely to rise next year," says Commerzbank, "chiefly on the back of a weaker US Dollar as the Fed rate-hike cycle comes to an end."
"But buoyant US economic activity and the US Fed's ongoing rate-hike cycle," says Macquarie, "are dominant supports of the US Dollar" and therefore of Dollar-denominated assets, led by US stocks and shares.

An "extension in 2019 of US growth outperformance, with increased productivity growth...as the [Fed] hiking cycle continues" would see gold prices fall it says.

But that isn't ICBC's base case. Instead, and after the Dollar rose in 5 of the last 6 years, they think the US currency is now "peaking"...
...and that "creates upside room for gold". At least in US Dollar terms.
"Key downside risks?" asked Standard Chartered's Suki Cooper at this month's Biennial LBMA Seminar in the City of London.
"Prolonged Fed hiking cycle...Weak physical demand becomes widespread...Stronger USD and rising yields...Lack of investor interest persists and ETP redemptions."
But on the other side "Key upside risks are that gold gains safe-haven appeal," she went on.
"Equity market weakness accelerates...the Fed hiking cycle falls behind the curve [ie, fails to keep pace with inflation]...creating USD weakness and falling US Treasuries."
Early signs are, that 'safe haven' appeal has already asserted itself as 2018 ends, helping gold break higher against the Dollar while other assets – notably China's currency, the Yuan – continues to slip versus the greenback. 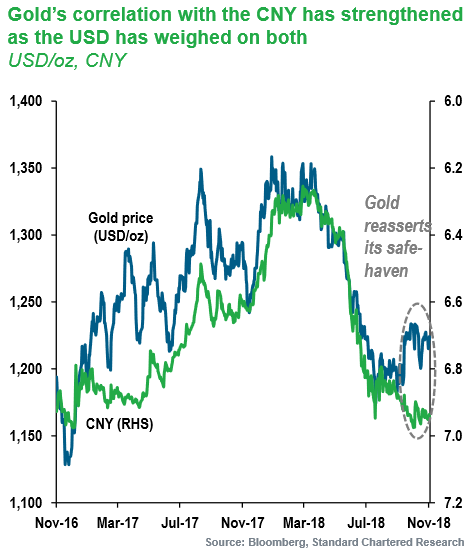 Altogether, StanChart tends towards ICBC's more bullish view on gold. But for now at least, Suki Cooper wasn't saying exactly where that might put the gold price...
...a very smart trick used to great effect by bullion-bank HSBC's James Steel at the same LBMA event at the Guildhall in early December.
"I don't want anyone to think I have a crystal ball about how the world is going to look in 2030," he said, giving a great presentation on the big issues for demand and supply over the next dozen years or so.
"But we do have an excellent economics team who put together something very interesting on 2030...and I've taken it and applied it to what I think it might mean for the gold market."
Most dramatically, HSBC's bullion analyst flagged the projected growth in emerging-market economies. 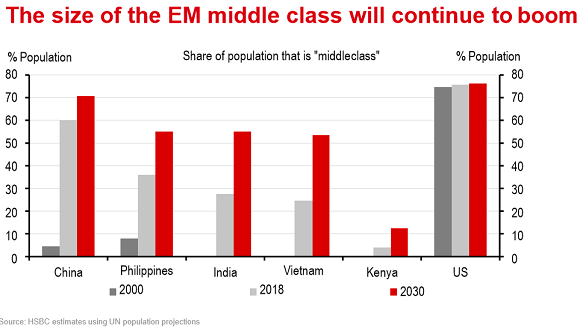 Given that 8 out of the top 10 gold-consumer nations are currently classed as "EM" that projected growth in luxury-buying middle class households will surely support demand to the year 2030.
If you can find a spare 20 minutes amid the countdown to New Year, I'd urge you to watch Jim Steel's great presentation on YouTube.
So near-term, let's bear in mind the impact emerging-market news could have on prices. Because emerging-market demand for gold should help put at least a floor under prices on long-term trends.
Don't expect any price forecasts out to 2030 however. It's hard enough trying to forecast 2019.
Still, we'll take a stab at the coming year's direction in Part III...