END_OF_DOCUMENT_TOKEN_TO_BE_REPLACED

Gold in 2015 will find mine output slowing, the Dollar rally questioned, and China's demand ever-more important...
AFTER 2013 belonged to equity investments worldwide, and gold prices sank with silver, 2014 saw a split between the US and the rest of the world, writes Adrian Ash at BullionVault.
Pretty much anything stamped "Made in America" gained sharply this year, as our Annual Asset Performance Table shows. 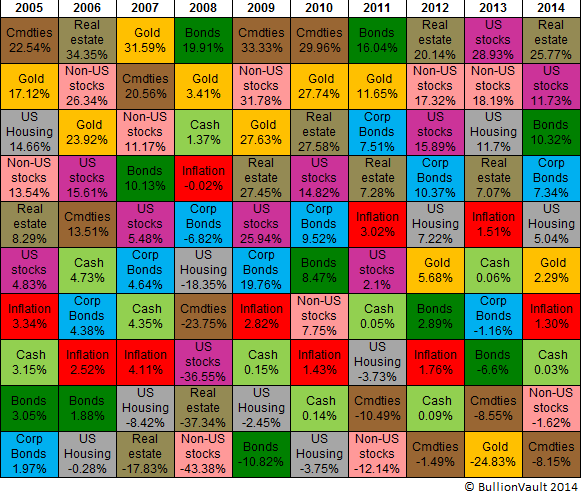 Yet gold has held steady vs. the Almighty Dollar, gaining in Euros and Sterling terms, and flying vs. the Japanese Yen and Russian Ruble. Silver on the other hand has fallen badly again, dragged down by being an industrial metal caught in the same commodity slump as crude oil and copper.
So what might 2015 bring?
US monetary policy will be crucial again. But not quite as most analysts are now forecasting.
The fact of QE ending this year in the US was already priced in by 2013's near-record crash. As we said at the start of 2014, a lot of good news was also priced into other asset classes, especially the stock market.
2015 is now expected to bring the first rise to US interest rates. Yet the Fed's new buzzword...that it will be "patient"...says any rise will likely be small, a mere token. Delaying and disappointing the Dollar's bull run could see a marked rebound in Dollar gold and silver prices.
And in truth, I think, QE has not really ended. It is only taking a pause.
Looking to the floor for precious metals, world gold mining output is likely to have peaked this year. Cost-cutting is starting to delay or close new projects, and lower investment means lower output further ahead. This might not matter immediately, but mining costs suggest a psychological floor for 'hot money' traders to work with around this $1200 level.
Silver could aso see mine output slip from near-record levels in 2015, because it's mostly a byproduct of mines wanting to get other metals, and the commodity slump is denting new spending there as well. Current prices are well above whatever cost an analyst might put on digging up silver. Still, it is perhaps signal that this month's sharp crash to near 5-year lows came right around estimates for primary silver mining costs at $14 per ounce.
On the demand side, the growing threat of a slow, global deflation could hurt both gold and silver buying. But savers wanting to preserve their wealth will always find gold has appeal, especially if deflation risks credit defaults and bank failures.
Silver in contrast may find technology and other end-user demand suffers. 2014's new 5-year highs in the Gold/Silver Ratio suggest "store of value" is winning over industrial growth.
Most urgently though, we still don't know how China's huge private gold buying will respond to a slowdown in the world's second-biggest economy (and its No.1 consumer of pretty much everything), let alone a "hard landing" or credit bubble collapse.
2015 looks increasingly like the year we might get to find out at last.