END_OF_DOCUMENT_TOKEN_TO_BE_REPLACED

The current surge in Gold Prices reflects much more than Dollar weakness. All official money is sinking fast...

WITH THE WHOLE WORLD now squinting at the fast-vanishing US Dollar, it was only ever a question of "when" – not "if" – the bold and the beautiful would start rejecting the mis-shapen greenback.

"We don't know what will happen to the Dollar," says Patricia Bündchen, sister and manager of Gisele, the statuesque and shapely Brazilian super-model. "So contracts starting now are more attractive in Euros."

But whatever hair-pulling and hissing is going on between Gisele's people behind the catwalk, the former squeeze of Leonardo DiCaprio has now asked for Euros, not Dollars, in payment for promoting Dolce & Gabanna's new perfume, "The One".

Being based near Milan, Italy, D&G no doubt had plenty of Euros to hand. But Proctor & Gamble? According to Veja magazine – Brazil's best-selling weekly – Gisele has now demanded Euros instead of Dollars in her contract to promote their Pantene shampoos and conditioners.

And who can blame her? Gisele made an income worth $30 million in the year to June. If she kept that sum in US Dollars, then this Beauty would have already lost 8.3% of her earnings – in four short months – to the lumbering Beast... 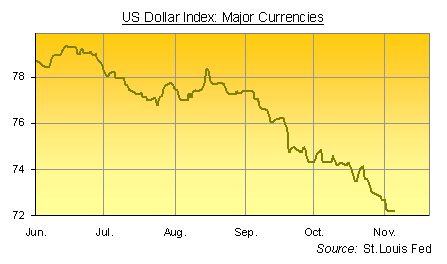 Rejecting the US Dollar isn't a new gambit for headline-hungry celebrities, however.

Last time the Dollar sank beneath the weight of its own low-yielding Treasury bonds, soaring oil prices and a looming recession, Bette Midler – the comedienne and singer – famously demanded that her $600,000 fee for a European tour in July 1978 be paid in South African gold coins.

Smart move, Bette! Eighteen months later, that little mountain of Krugerrands would have been worth $2.1 million. In nominal dollars, her very worst return – even at the very nadir of gold's bear market two decades later – would have been a 35% gain.

Gisele Bündchen actually seems keen to quit the US altogether. (Maybe The Enquirer should tell her current beau, Tom Brady of the New England Patriots.) She cut the asking price of her New York penthouse just last weekend. Now her West Village apartment, with views of the Hudson thrown in for free, is on the market for $9.2 million – down from $10.9 million previously – according to the New York Post.

"In TriBeCa," the Post goes on, "Russian supermodel Natalia Vodianova has discounted her alluring, 5,000-square-foot penthouse from $11 million to $9.9 million."

Are the beautiful people turning bearish en masse on both the greenback and on US real estate? If so, then they might they want to show the brains of Bette Midler...instead of the tanned mid-riff of Gisele. 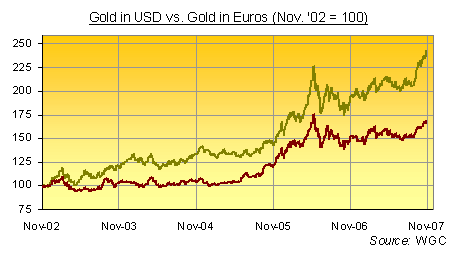 Since the US Dollar reached parity with the Euro, exactly five years ago this week, Gold Priced in Euros has risen by nearly 70%.

And yes, "gold is the most reliable performer as a hedge against Dollar movements," as Rhona O'Connell found in a research report for the World Gold Council last month. She compared the performance of various commodities – everything from zinc, cattle, heating oil and palladium to sugar – against the Dollar's changing fortunes on the currency market.

O'Connell's yard-stick for the US Dollar was an index of the world's next five most important currencies. Gold bullion mirrored the changes in this Dollar index more closely than any other physical commodity between Jan. 2005 and July 2007.

But gold is providing much more than just a Dollar hedge. Given the political and economic barriers to raising interest rates anywhere in the world right now, you might wonder if it's simply going to keep on delivering, too.

Gold so far in November '07 has also broken out against a whole series of other major currencies besides the US Dollar. Gold Priced in Euros just broke the top of May 2006, equal to €562 per ounce. The Japanese Yen is trading at a 23-year low in terms of bullion. The Australian Dollar – caught between being a "commodity currency" and a debt-fuelled Anglo-Saxon basket case – has lost 16% of its gold value since mid-August.

And for British investors, gold has never been so valuable... 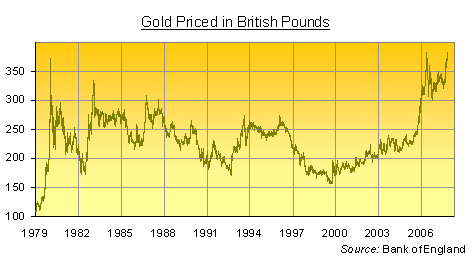 What to make of it? Here at BullionVault, we've been trying to figure out just what investors Buying Gold Today can expect it to do for them.

Gold itself makes no promises, remember. Paying no yield or interest – and with little-to-no industrial usage compared with silver or platinum – gold really doesn't have very much to recommend it. Not besides the verdict of history.

The ultimate store of value and wealth for more than 3,000 years, gold is now drawing in a flood of investment cash from private individuals across the world. The proof? It's moving fast against ALL of the world's major currencies, not just the Dollar. 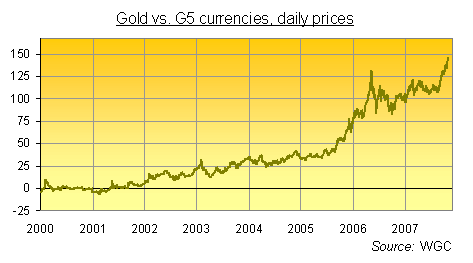 We blame central bankers. And government wonks. And those investment banks who created a flood of "near money" assets at a record clip when they spied the mark of low-income home-buyers with no hope of ever repaying a mortgage.

"Mervyn King's effective guarantee of the liabilities of the British banking system is much more significant than declining South African gold production," as John Hathaway of Tocqueville Asset Management puts it.

If you want to join Gisele's after-show party, then perhaps you should buy Euros. Thrown in for free, you'll get the yawning gaps between Germany's economy and the over-spent, over-geared nations of Italy, Greece, Spain, Ireland and Portugal.

But if you don't trust central bankers or government paper, on the other hand, then make like Bette Midler and Buy Gold. Just don't pay the extortionate dealing charges and insurance fees that buying a pile of Krugerrands will cost you.