END_OF_DOCUMENT_TOKEN_TO_BE_REPLACED

If it's a fraud to borrow what you cannot repay, it's folly to lend what you'll never get back...

"IT IS A FRAUD to accept what you cannot repay," claimed Publilius Syrus back in the first century BC.

But Syrus was merely a freed Roman slave, and a hack writer of Latin maxims to boot. What would he know about collateralized loan obligations? No less, perhaps, than today's team at the Bank of England in London.

"British venture capital heavyweight John Moulton told a reporter," says Sean Corrigan of Diapason CM, "that at a recent breakfast meeting with Bank of England officials, none of them knew what a 'CLO' actually was..."

Now, I wouldn't know a collateralized debt obligation if it started weeding my lawn. Nor would The Economist magazine, not judging by its most recent stab at explaining this haute finance caper to its readers worldwide. The Financial Times has been lost on all things "collateralized" since it first tried to cover the CDO market in Jan. 2005.

But unlike the policy wonks on Threadneedle Street, financial hacks aren't paid to cheer Ben Bernanke in Jackson Hole while defending financial stability back home. Nor is it their job to underwrite those investment-banks lenders who grew rich from the Great Credit Fraud of 2002-2007...issuing loans to debtors with no serious hope of repayment.

"It is too soon to quantify the impact on the economy as a whole," said Mervyn King, governor of the Bank of England, in an open letter to the British Parliament sent on Wednesday this week.

"In the short term, some corporate loan rates will rise in line with inter-bank rates. Banks that are unable to sell pools of loans that they had securitised, or who need to support off-balance sheet vehicles, may cut back on new lending."

What's a central banker to do? "The provision of liquidity support [by the BoE] undermines the efficient pricing of risk by providing ex-post insurance for risky behaviour," says Dr.King, entirely guiltless in getting us all here in the first place.

"That encourages excessive risk-taking, and sows the seeds of a future financial crisis." 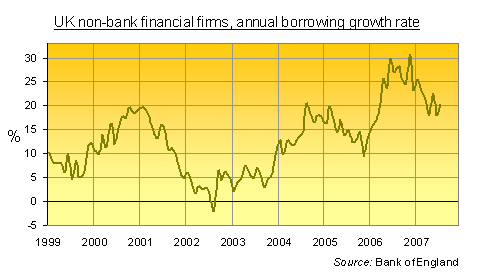 Thus the Trimmer's choice today: make free with financial support for the country's biggest banks...or let the market "reprice" their risk-taking and take a gamble on the nation's financial stability instead?

Put another way – and expressed so succinctly by the Mayfair hedge-fund blogger at FinTag.com – Dr.King's choice is just the same as Ben Bernanke's:

"Put rates up and win a Nobel Prize in Economics. Put them down and get a lucrative job at Lehman. Leave them as they are and look pathetically weak."

In which case, a pathetic job back-office job at Lehman Bros. looks the most likely reward...

"Mass delusions are not rare," wrote Garet Garrett, nearly 2,000 years after Publilius Syrus scratched out his maxims in Latin. In Garrett's 1932 tome, A Bubble that Broke the World, the editor of the New York Tribune noted how mass delusions "salt the human story...

"[But] a delusion affecting the mentality of the entire world at one time was hitherto unknown. All our experience with it is original."

Garrett was speaking of the late '20s bubble on Wall Street, but his words do more than just echo today. "This is a delusion about credit," he went on. "And whereas from the nature of credit it is to be expected that a certain line will divide the view between creditor and debtor, the irrational fact in this case is that for more than ten years debtors and creditors together have pursued the same deceptions.

"In many ways, as will appear, the folly of the lender has exceeded the extravagance of the borrower."

Skip forward to early autumn 2007, and has the folly of lenders outweighed the extravagance of borrowers once again?

Well, in June this year, some 30% of first-time homebuyers in Britain resorted to an "interest-only" mortgage, just so they could make the monthly payments and grab the keys to the door. That might sound like extravagance.

But fewer than one-in-three of them presented an investment plan to their lender with a view to ever repaying the principal...leaving one-in-five of ALL first-time buyers paying the interest alone, with nothing set up to cover the base debt itself.

On the part of the lenders, that sounds like folly. Five years ago, just one-in-twenty of Britain's first-time homebuyers opted for interest-only home loans with no plan for repayment.

"The market has it wrong in that it calls this the subprime crisis," says Barry Wilby, former manager at Oppenheimer Funds, the $250 billion asset management firm. "I think it's really a crisis in the underwriting and packaging of debt. That means it has implications for the extension of credit, because of the trust that people will have in institutions."

"It's a big psychological problem for capital markets," Wilby warns, thinking no doubt of the spike in interbank lending interest rates – now at fresh two-decade highs just shy of 7% here in London – "which will result in a slowdown in credit extension which I think will result in the slowing down of the global economy."

Credit extension in the UK looks set to slow – and slow fast. The Bank of England might not know a collateralized loan obligation when it trips over one. But it said Tuesday that the average variable rate mortgage issued in August rose by 0.25% to a nine-year high of 7.69%.

"Fear of retailing bloodbath when interest rates hit home," screams The Times in response. JJB Sports, a major High Street retailer in the UK, has cut its full-year forecast by one quarter. The CEO of Next, another leading clothes store, warns the real crunch could hit just as Christmas arrives.

And now that game is up too, you might want to check just who owes what to whom in your stock-market portfolio.