END_OF_DOCUMENT_TOKEN_TO_BE_REPLACED

Foreign Affairs sees an end to national currency – and hints at the Gold Standard's return...

Observes Cryptogon.com, "Foreign Affairs is the most important and influential journal of international relations in the world...the mechanism by which the Council on Foreign Relations (CFR) disseminates the game plan."

The CFR claims that its 3,400 members includes past and present US presidents, secretaries of state, defense and treasury officials.

"Publications like the New York Times and the Wall Street Journal are dumbed down versions of Foreign Affairs," says Cryptogon. "It's where politicians look to determine what’s safe to say, which policies are doable, and what needs to be done."

Now "the world needs to abandon unwanted currencies," urges the journal, "replacing them with Dollars, Euros, and multinational currencies as yet unborn."

"Economic development outside the process of globalization is no longer possible," says the author, Benn Steil, director of international relations at the CFR, "[so] countries should abandon monetary nationalism. Governments should replace national currencies with the Dollar or the Euro – or, in the case of Asia, collaborate to produce a new multinational currency over a comparably large and economically diversified area."

One bald assertion, two imperatives, and a quick fix for world improvers everywhere.

Sovereignty in the Pound, Peso and Pengo gets in the way of free trade, says Steil. Foreign exchange markets don't help but hinder globalization. One country, one currency only adds fresh confusion.

The "myth" of monetary sovereignty also adds costs as well, as the Banca d'Italia will agree. Five years after the Lira was replaced by the Euro, L'Espresso reports that Mario Draghi, governor of the Italian central bank, wants to close 58 of its 97 nationwide branches –"redistributing" 1,500 employees in the process.

You won't be surprised to learn that trade unionists and local politicians are against the idea. Cutting domestic costs to pay for a post-national "ism"– in this case, that brand of "pan-Europeanism" celebrated in Brussels and Frankfurt – always upsets the mob. What if they start waving pitchforks and rope?

But it's only by losing jobs and slashing costs that the Italian state might finally keep its key Eurozone promise this year.

Eight years after the single currency first floated, Rome now sits on target – just – to keep its government deficit below 3% of GDP in 2007. Meeting the limit might quash the rumors that Italy in fact wants to quit the Euro. As recently as June 2005, after all, Rome's welfare minister called for a referendum on reviving the Lira.

Roberto Maroni wanted to cure Italy's recession – the third in six years – by devaluing its money. Devaluation had always worked in the past. It would work just as well now if only the Italian currency belonged to Italy.

But what Maroni his fellow cospiratori missed – just as Nicholas Sarkozy, the new French president, missed when he called for Euro devaluation to compete with Chinese exports amid this spring's election campaign – is that the European Central Bank (ECB) has been doing a great job of destroying regardless. 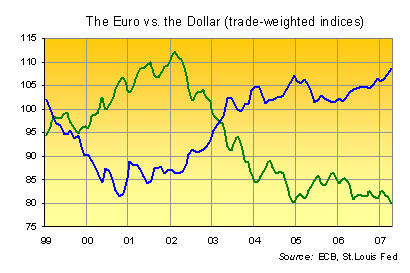 On floating as a single currency in Jan. 1999, the Euro promptly sank by nearly one-fifth inside two years. Lacking political support – and hated by shoppers across the Union – the Euro was toast.

Yet the European Central Bank only turned up the heat! The ECB slashed Eurozone rates from 4.75% to 2.0% over the following three years. Annualized growth in broad money doubled to 8% and above.

Yet somehow, the ECB got a currency that leapt one-third higher!

The Euro has continued rising since its lending rates finally turned higher at the end of 2005. Now up at 3.75%, they're due for what passes as "normalization" – at 4% or above – sometime this summer.

But again something's gone wrong. For higher interest rates have failed to slow the bubble in Eurozone credit and debt. Broad money growth just hit a near two-decade record. Pretending to twiddle the knobs and dials of monetary policy, Duisenberg and Trichet have delivered more Latin excess than Teutonic sound money.

That wasn't the deal when the West German Bundesbank – "German mainstay and symbol of solidity," as the Washington Post once put it – agreed to share low inflation and strong monetarism with the rest of the EU.

"It is widely assumed that the natural alternative to the Dollar as a global currency is the Euro," notes Benn Steil in his Foreign Affairs missive. "Faith in the Euro's endurance, however, is still fragile – undermined by the same fiscal concerns that afflict the Dollar but with the added angst stemming from concerns about the temptations faced by Italy and others to return to monetary nationalism."

"But there is another alternative," Steil adds, "the world's most enduring form of money: gold."

If Steil is serious about a return to the Gold Standard, he makes a pretty weak case. And while yes, gold has acted as a store of value all throughout history, none of its weight or rarity counts for much as a "unit of account" today.

The world shows no fear, however, of transacting its business in Euros. Last December, the value of Euro notes circulating worldwide overtook the value of Dollar bills in total. The supply of paper Euros has doubled in value from the last days of pre-Euro money. And just as the Dollar functions outside the US, the Euro is now accepted outside the Eurozone's borders.

Between 10-20% of all Euro notes circulate outside the 13 nations, according to ECB guesses. The €500 note, for example, carries more bling than a gold-plated Uzi. Worth seven times the largest Dollar-denominated note – and eight times Japan's ¥10,000 bill – the Five Hundred Euro is perfect for large, anonymous cash transactions.

Hence its acceptance in Russia, reports the Financial Times. The gangster republics of Kosovo and Montenegro want to go one better, in fact, and adopt the Euro as their national currency!

What about Foreign Affairs' vision...of a world run on two or three fiat currencies, issued and accepted by diktat...? It might become more likely every time Moscow drug-lords trade a fresh kilo of crank.

But as a store of wealth for the future, however, gold keeps winning out.

Since the dream of a European single currency became flesh at the start of 2002, gold has outstripped the Euro by 10.3% per year on average. It's gained more than 12% annually against Sterling. In terms of gold-priced devaluation, however, the Dollar and Yen are both out in front. Neck-and-neck in the race to debase, they've both halved against gold since the start of 2002.

Do business in Euros...but hold your wealth in gold? Under monetary union to date, the trend looks solid and clear. Foreign Affairs only hints at the prospect.

But maybe Washington's finest are reading...?