END_OF_DOCUMENT_TOKEN_TO_BE_REPLACED

If you like your theatre as absurd as contemporary painting, keep an eye on the fine-art market in London...

"GOOD ART SPEAKS TRUTH, indeed is truth, perhaps the only truth," wrote Iris Murdoch in The Black Prince – and seeing how Peter Doig's White Canoe (1990) was deemed good enough to fetch $11.3 million at auction on Wednesday, that would mean the only truth today is inflation. 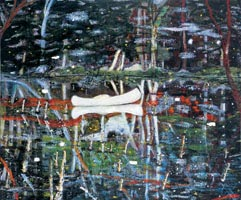 Sotheby's midweek sale of contemporary art in London netted £45.7 million all told – some US$90 million. Indeed, it was "the most successful contemporary sale ever staged in Europe," as the auction house gasped in its press release. Doig's "early masterpiece" set a new cash record for a work by a living European artist, bagging five times its reserve.

Altogether the evening's sales ran up to 60% higher than the pre-auction estimates of only four weeks before. How's that for art appreciation!

It's proved quite a week for London's wealthiest art lovers and their dealers. On Monday, Sotheby’s achieved its highest value auction ever in Europe, knocking down Impressionist & Modern Art for a total of $173 million. On Tuesday night, Christie's achieved $177 million with its own Impressionist and Modern auction. Wednesday brought Sotheby's Contemporary sale, followed by Christie's auction of Post-War and Contemporary art on Thursday.

That netted $138 million, including a new Francis Bacon record, nearly double the previous high of $30 million hit in November.

Sotheby's and its only serious rival – the privately-owned Christie's – both bill their vendors 5% of the hammer price. They also charge successful bidders for the pleasure of watching the gavel come down, an innovation begun more than three decades ago. And in the last month both auction houses have hiked their buyer commission rates to 20% of the first $500,000 – up from $200,000 previously – plus 12% of the remaining hammer price.

Caveat emptor applies, in other words, even if the art is to your taste. Doig's White Canoe isn't all that bad, but you wouldn't know it from the Saatchi Gallery's description:

"[Doig] paints white like it’s got every color in it; he paints dark like it’s got every color on it. A mirrored image of a lake at night, White Canoe is a wishful infeasibility where the reflection is more detailed than the landscape itself. The boat is aberrantly glowing. The landscape has the all-consuming blackness of an oil slick, deafening and motionless; all other colors seem to slide across it in a rustic laser show. The blue stains of tranquil moonlight have the eerie effect of erasing; Peter Doig’s perfect night seems to be melting like celluloid stuck in the projector..."

This bubble has got nothing to do with the paintings, of course. "Good business is the best art," as Warhol said, and the sharpest business minds only look foolish in the auction room if they can't settle up afterwards. Sotheby's and Christie's between them control nine-tenths of the world market in art, furniture and jewelry investment via live auctions.

But even the business of helping Russian billionaires make newspaper headlines with their disdain for cash can be tough. That's why, following the slump in fine art sales that came with the collapse of Japanese real estate and equity prices in the early '90s, Christie's and Sotheby's colluded in what the European courts called "secretive meetings" to rig commission rates in their favor, replacing competition with inflated fees that defrauded vendors out of an estimated $450 million.

Fair's fair, we all need to scratch a living, and between 1989 and 1991 – when Tokyo's various asset bubbles burst and began dragging the whole Japanese nation into deflation –the turnover in fine-art auctions worldwide sank by three-fifths. Things steadily improved as the S&P and then Nasdaq picked up where the Nikkei had left off. But gross sales slipped again as equity prices declined, down more than 25% between 1999 and 2003.

For Sotheby's in particular, the DotCom Crash proved expensive. It began losing money in 2000, even with the US anti-trust charges of that year ($203 million) excluded. Sotheby's finally recovered to report a profit for FY 2003, after the European and Tokyo stock markets had finally turned higher. But the Board only got round to re-instituting a dividend last August, after a gap of six years. The third quarter saw 10¢ per share declared – some rate of return for investors in a business that earned $81 million gross on revenues of $386 million in the first 9 months.

"After the [collusion] scandal died down, Christie's and Sotheby's quietly adjusted their commission rates, independently, so that there were discreet but not big differences," says art dealer and consultant Christopher Wood. "The whole collusion business was simply unnecessary...Christie's and Sotheby's are such close competitors and similar firms that whatever one firm did, the other was bound to follow. They didn’t need to collude."

Fast forward to February 2007, and there's no need to rip off the Russian oligarchs or City bankers behind this week's record sales. The "wishful infeasibility" of London's art market will do that all by itself. Nor is anybody accusing anyone of anything besides "depth and strength" in the bidding today – not even exploitation of a duopoly. Even before last month's commission hike, the bubble in financial sector bonuses let Sotheby's gross $104,000 whenever the hammer came down for $500,000 or more.

Hedge funds get to take one-fifth of their clients' profits. Why not milk the bankers for another grand, too?

"Such incremental revenue dollars, with no associated costs, should drop entirely to the operating income line," according to a note from Wedbush Morgan Securities in January. It failed to use the words "rent seeking", but if you're the right side of the money bubble today, you don't want to moralize. Sotheby's expert valuation and auctioneer staff certainly won't. Their salary bill rose 22% in the four quarters to Sept.

And besides, "the percentage of [US] GDP attributable to corporate profits is near a multi-decade high," as Barron's recently reported. "Corporate gains tend to benefit the affluent through strong dividend growth, capital-gains income and high-salaried jobs, while restraining working-class wage growth. Ajay Kapur of Citigroup calls such economic trends Plutonomy – a global economy disproportionately geared to the rich."

The butlers and parlor-maid stocks serving today's global overlords have outperformed the S&P for the last 21 years, according to The Daily Telegraph in London. But Citigroup continues to recommend 24 firms set to cash in further as the über-rich throw their money around. Sotheby's is right up there with Four Seasons Hotel Inc. (FS), Tiffany & Co. (TIF), Polo Ralph Lauren Corp. (RL) and Coach Inc. (COH).

For a sector apparently awash with high-spending clients, however, there's little sign of cash trickling down to investors. Sotheby's trades for 25 times trailing earnings, about average for this selection. And none of these stocks now yields more than 1%.

The only attraction, therefore, must be capital gains, inflated by the stock market buzz around yet further asset-price inflation in prime real estate, private jets and fine art. But there will only be fresh meat for the gavel to beat as long as Wall Street and the Square Mile keep paying ever more in bonuses. Ten of the 53 buyers in Monday's auction were first-time purchasers of Contemporary Art at Sotheby’s, says the auction house. Analysts at Barclays Wealth Management reckon that, all told, one in ten City bonuses this New Year will be spent – in part – on investing in art and antiques.

So while the ultra-high-net worth buyers rely on strong energy prices to fund their collections – the Russian art market rose 2,365% in the five years to 2005 – the newbies in the art market are raising their hands straight after clocking off for the day at Goldmans, JPM and the rest. As the financial markets go, therefore, so goes the art market.

"Luxury spending is the first thing to fail when the oxygen goes out of the economy," wrote Robert Hughes for Time magazine in 1990. Air was still gushing out of Japan's asset-price bubbles, and "art [was] the canary in the mine shaft." The little bird stuffed by Tokyo's plutocrats croaked it on Tuesday, 6 Nov. at a Sotheby's sale in New York. The auctioneer – head of Sotheby's North America – choked as he cut the asking price for a Julien Schnabel piece made of broken plates from $650,000 to $210,000. Yet still there were no takers. It had sold in London the previous year for $225,000.

"The Japanese are awash in money," one New York dealer had said in 1989. Now their cheap money pump – flooding the bond, commodity and derivative markets with carry-trade Yen – is washing across Old Masters and New Pretenders alike yet again.

"All art," as Iris Murdoch also noted, "deals with the absurd." If you like your theatre absurd too, keep an eye on the art market.