END_OF_DOCUMENT_TOKEN_TO_BE_REPLACED

US interest rates are just half the rate of inflation; good job Ben Bernanke is watching closely...

BEN BERNANKE put the wind up Dollar bears, Gold bulls and just about everyone else in the currency markets on Tuesday this week.

He was at it again on Wednesday, telling Harvard students that because "indicators of longer-term inflation expectations have risen in recent months...we will need to monitor that situation closely." The Dollar's decline, the Fed chairman said, could accelerate the rate of inflation inside the United States.

Hardly a startling insight likely to win him the Nobel prize for economics this year. But the market's reaction? It deserves a Pulitzer award for fiction. 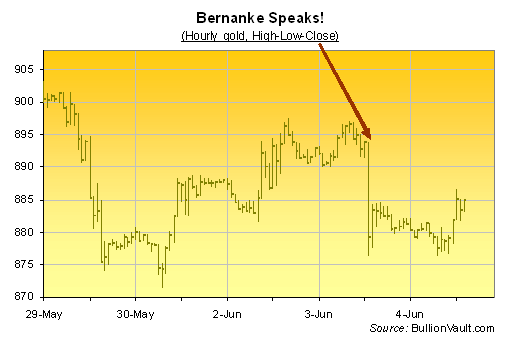 "[Bernanke is] putting the market on notice that the Dollar has begun to reach a level that may be uncomfortable for the Fed," say economists at Goldman Sachs.

"The policy debate is starting to shift," agrees John Kemp at Sempra Metals, "and the speech looks like an effort to draw a line against both further Dollar weakness and any renewed escalation of either commodity prices or inflation."

"Not since the days of the Louvre Accord more than 20 years ago," adds a Greenwich hedge fund economist, "has the Fed made an explicit stand against the weakness of the Dollar."

The Fed's taking a stand? Bernanke will find he's missing a leg if he tries to stand by the "strong Dollar" comments he made – via satellite – to a central banking conference in Barcelona this week. All he managed, in fact, was a flat contradiction of what Fred Mishkin claimed on behalf of the Fed only nine weeks ago.

"The correlation between consumer price inflation and exchange rate changes is now very low in most industrial countries," said the (now ex-)Fed member at that March conference in Oslo, Norway. Back then, however, the Dollar was hurtling towards fresh all-time lows against Gold, the Euro, crude oil and most of the world's key food-stuffs.

Whereas on Tuesday this week, reassuring US consumers about the finer points of "pass-through" was no longer so urgent. So instead the Fed chairman set out to draw a "line in the sand" and put a halt to the Dollar's decline. Or so say the rag-bag of economists, financial hacks, pundits and forex traders picking their way through his words like some Roman divine picking at the guts of a dove.

Poke at the poor bird's innards long enough, and they can read pretty much whatever they want into the Fed chairman's speech – even the cold fact of the Dollar's near-40% drop since 2002. 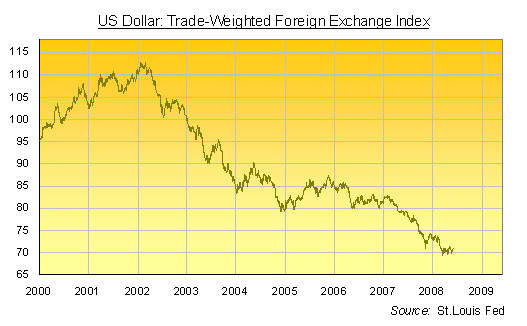 "And what that also means, of course," reckons Tom Petruno in the LA Times, "is that the Fed is highly unlikely to cut interest rates further. Bernanke strongly hinted as much."

"For now," said the Fed chairman in fact, "policy seems well-positioned to promote moderate growth and price stability over time." And while he's wrong on both counts (or so we think, here at BullionVault) all he really hinted at is a refusal to hike rates for a long time to come.

Leaving the Fed funds rate at 2.0% will leave the returns paid to cash way below zero after you account for inflation.

Say, just where's the Dollar bull market in that? 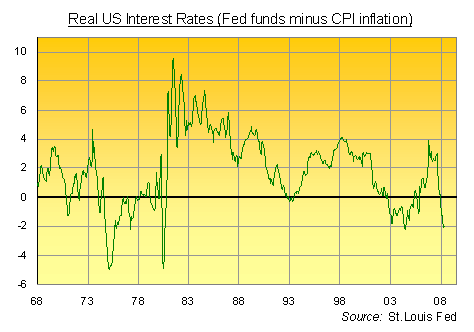 "With interest rate futures now pricing in a 98% probability of the Fed holding rates constant this month," said today's note from Standard Bank in Johannesburg, "plus a 30% probability of increasing rates by 25 basis points in October, we see the Dollar well supported in the near term.

The Dollar made a rally during 2005, gaining 7% on the foreign exchanges. The price of gold, meantime, rose 17% vs. the greenback itself.

Also notice how the declining Dollar didn't decline at all for 29 months starting in November 2004. And over that period Gold rose 54% for US investors and savers.

Finally, take note that three-quarters of the Dollar's losses so far had already come before Ben Bernanke slashed US interest rates to 2% – taking the real returns paid to cash way back below zero – so that the big New York banks could borrow emergency funds at sub-market rates starting last August.

Quite what the Fed's negative real rates will achieve for the US economy in 2008 remains to be seen. Strong credit growth – boosting domestic demand and thus imports and house prices – might just fail to revive.

But a strong Dollar and weak gold? Thanks to sub-zero returns to cash?

Never happened before. But hey, who knows what the pundits – and the market, short-term – will make of 2% interest chasing 4% inflation in prices...