END_OF_DOCUMENT_TOKEN_TO_BE_REPLACED

Nothing works like gold when you need to hedge against your own currency...

WEDNESDAY'S NEWS that, at last, Standard & Poor's has caught up with the bond market – and the steady trickle of fleeing bank deposits – by downgrading Spanish debt had a marked effect on the Euro.

So did Tuesday's downgrade to "junk status" of Greece's government bonds. And the cut to Portugal's credit rating, too.

It all had a marked effect on Gold Prices as well, not least versus the Euro, but also against the US Dollar and Japanese Yen – apparently the only beneficiaries of "Ebola contagion" in Europe to date... 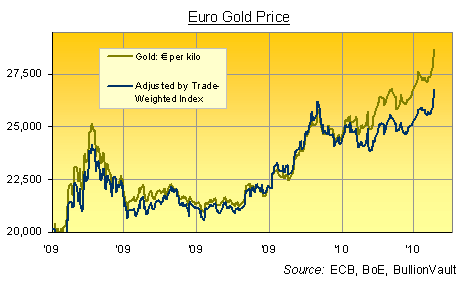 This week's action "demonstrates gold's ability to protect investors from crises that debase their own currency, but not those of other sovereign issuers," reckons Patrick Artus at French bank Natixis.

Investors seeking protection against the debasement of other currencies than their own are being just plain greedy, however, in our humble estimation. The 4-month high in Dollar Gold Prices should be enough for anyone trying to hide from Greek contagion, especially if they don't share Greece's currency.

More to the point, and coming just after Italy's foreign minister called the Greek bail-out "a rescue for all of us", the mid-week contagion proves once again that nothing works like gold when you need to hedge against your own currency.

Even trading down to €28,760 per kilo of gold – that "barbarous relic" thrown over in favor of Europe's post-historical unity 10 years ago – the Euro has still got a lot of long-term devaluation to go.

No doubt it will get it as well – good and proper – whichever way Germany's politicians jump.