END_OF_DOCUMENT_TOKEN_TO_BE_REPLACED

Gold has risen by one-half vs. the Euro, yet still traders bid the currency higher...

Infamous scourge of both gold and "the long run", Keynes more than quadrupled the funds of Kings College, Cambridge, between 1929 and 1945. London's stock market, meantime, ticked lower by half-a-per cent per year on average.

Keynes steered clear of currencies during the Depression, but no doubt he would be buying Euros today. If only the long run – "when we're all dead" as he noted – hadn't got him 61 years ago! Anyone worrying about the fundamentals, on the other hand, has to ask why everyone else thinks the Euro makes such a good bet in 2007.

"They're treating the Euro as if it was the old German D-Mark," noted Bernard Connolly of Banque AIG to London's Daily Telegraph last month, "but it's not.

"Germany has regained competitiveness. It has a whopping current surplus and can withstand a higher Euro: France, Italy, Spain, Greece, and Ireland cannot."

"There isn’t a single country in the world where money isn’t a political instrument serving growth and employment," said Nicholas Sarkozy during his election campaign versus Ségolène Royal.

"Everybody else is protecting themselves; Europe cannot allow itself to be the only one disarmed."

Trouble is, however, that the European Central Bank has been doing all it can to debase the Euro, as we'll see in Part II. Yet still the world's forex traders continue to bid up the currency.

Last month the Euro popped above $1.3680, up by two-thirds against the Dollar from 2001. Early in May, the Euro hit a fresh life-time high against the Japanese Yen. Way up there at ¥163, it has risen by more than 80% against the world's cheapest money since mid-2000.

Versus the Swiss Franc, old faithful of the world's top five currencies, it's climbed 13% since 2002. And since February this year, it has even knocked Sterling – darling of central bank and fixed-income reserve managers the world over – down by more than 4%.

Sterling itself had been trading around $2.00 per Pound, a quarter-century high of its own. One Pound in New York will now buy you twice as much stuff as it will in London.

Yet still the Euro wins out!

Whatever Sarkozy's simple-minded politicking might claim, Eurozone interest rates can't explain the Euro's ongoing bull market. Paying 325 basis-points more than the Yen, the Euro still lags the Dollar. Eurozone interest rates sit only 140 points ahead of the Swiss Franc – hardly enough to cover the rent on a suite of office for a hedge fund in Mayfair. On Thursday the Bank of England raised its interest rates to 5.50% – while the ECB stuck at 3.75%. Yet again, the Euro rose versus Sterling!

Then there's the money supply, that mud-covered fossil buried deep inside the European Central Bank's mandate by its ancestor, the German Bundesbank. Broad money in the Eurozone (M3) grew nearly 11% in the year to March 2007, a two-decade record. It's grown by more than one-half since the Esperanto became flesh and began filling cash-tills across Europe at the start of 2002. 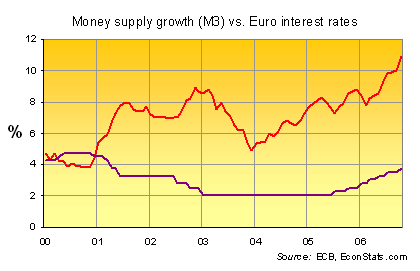 The Eurozone's population, meantime, has risen only 3.6% in size; that's including the two million Slovenians who joined at the start of 2007. So in short, the Eurozone's now got a lot more money per head – just the sort of monetary inflation that putting the Bundesbank in charge of Europe was supposed to prevent.

"Independence doesn't mean indifference," said France's president-elect Sarkozy of the European Central Bank late last year. "We can't go on with the indifference of a certain number of [central] bankers who don't understand that the priority isn't the fight against inflation which doesn't exist."

Inflation in the Eurozone does exist, however. Even on the official Consumer Price Index, the rising cost of living in Europe has now destroyed 10% of the Euro's purchasing power since it became the world's first sovereign currency to lack its own sovereign.

Perhaps it should come as no surprise, therefore, to find that physical gold bullion has gained nearly 50% versus the Euro since the start of 2005. Measured in Dollars, gold has outstripped gains in the Euro by more than one half since 2001.