END_OF_DOCUMENT_TOKEN_TO_BE_REPLACED

There's so much quanticipation of Euro QE, even the Financial Times says 'Buy gold'...!
WE'D WONDERED how long it would take, writes Adrian Ash at BullionVault.
So here came the Financial Times...right on cue.
"Gold rally due as central banks add risk," it predicted online Tuesday.
Newsflash for the newsroom. From November's new 5-year low in the Dollar, gold had already risen 13% for US investors.
British savers had seen physical gold rise 20% since then...and priced in the Euro, gold had already repeated its 12% gains of 2014 in less than 3 weeks of 2015 so far.
Never mind Wednesday morning's new jump to fresh multi-month highs. The big news in precious metals is now the catch-up in silver. It touched $18 per ounce for the second session running today, joining gold at 5-month highs in Dollar terms with a remarkable 14% rise so far this month.
Okay, so the FT can't rewind time and make its gold forecast two months ago. And there is every reason to agree with the writer, John Plender's key point.
Fears of deflation, plus 'competitive devaluation' between currencies, mean central banks will impose negative interest rates "across a growing number of countries," says the FT.
Savers facing "these dismal negative rates have good reason to ensure gold makes a comeback" long term, it adds. But that was just as true last year however. And the comeback in gold (if that's what January 2015's fast gains come to prove) is already well under way.
At the retail level, sales of gold American Eagle coins from the US Mint already match four-fifths of last January's full-month total. Here at BullionVault – the largest provider of physical gold and silver ownership online – the number of people opening and funding an account for the first time has reached 90% of last year's monthly average.
Most notably, the number of new users in France, Germany and Italy (our big three Euro markets) now stands 41% ahead of the same period in January 2014. Savers in the three biggest Euro economies, in other words, fear large-scale QE from the ECB tomorrow...just as the central bank of neighboring Switzerland effectively said it expects with last week's shock end to its Euro-Franc currency peg.
The hot money trading on margin had already jumped from its 13-year lows, hit at November's fresh Dollar-price bottom when the number of bulls was beaten, albeit briefly, by the number of bears. 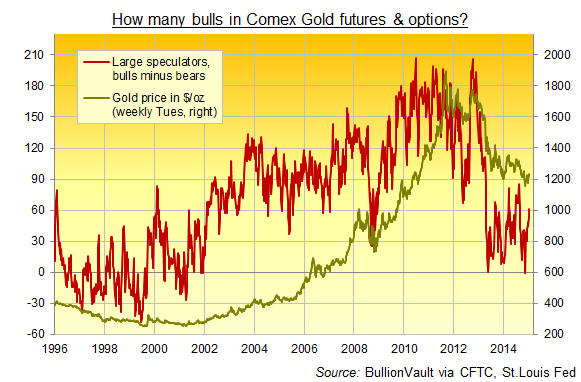 Now the so-called "smart" money of wealth management accounts is playing catch up, driving the fastest inflow of money to the giant SPDR Gold Trust (NYSEArca:GLD) since prices peaked in September 2011.
So short-term traders might, in fact, be wary of gold's latest pop. Because no amount of Euro QE from the European Central Bank on Thursday will be enough to keep the hot money this happy.
Look, it's not really the size of QE which counts...but the size of QE versus the average guess of Wall Street, City and Frankfurt analysts.
Trawling for forecasts, the best (and only) guess we can find is a Bloomberg poll of 60 economists who put Thursday's number at €550 billion...some $650bn. Or it might push to €1.1 trillion, according to gossip-mongers today, with €50bn per month right through 2015 and 2016.
Even if Mario Draghi beats that number...which is a big ask given the German Bundesbank's opposition to the whole idea of printing money to buy government debt...then stockmarket traders and banking investors will also know the trouble ahead in ever getting that money pumped into Europe's financial system.
As Bloomberg notes separately, Draghi's ECB began €1 trillion of Euro investing two months ago. Yet so far, it has bought only €2 billion-worth of assets.
Inflating the money supply, in other words, is proving much harder for the ECB than anyone guessed.
That makes deflation the big risk to your investments. Gold could make a good place to hide from the debt defaults and stockmarket losses now certain to follow. But first, Thursday's volatility could offer a useful chance to buy on a dip if you're being put off by the speed of gold's 2015 gains so far.
Note that word...could. There might be no pullback on Thursday. Gold might prove a miserable asset to own in deflation. We haven't seen the script, I'm afraid.
But unlike the untold mountain of debts now outstanding, physical bullion cannot go bust. It isn't anyone else's to create or destroy. A fact the smart money looks to be recalling.
Short-term drops however are what gold got every time the US and UK central banks unleashed new QE during their money-printing bonanzas starting six years ago.
Gold priced in Euros says there's a lot of quanticipation today. It could be set for a big quanti-climax short term.