END_OF_DOCUMENT_TOKEN_TO_BE_REPLACED

Gold investing demand just hit 20-month highs ahead of the UK Election...
FIRST the wrong football team, now a career-defining slip of the tongue, writes Adrian Ash at BullionVault.
But if David Cameron is having a bad General Election 2015, the clowns he's opposing are doing no better. Voters are sure to do most badly of all.
Can you claw something back – or cut your losses – by moving your money for fear of the outcome this week? Other private investors sure think so.
April just saw the strongest net gold buying on BullionVault since August 2013, led by UK investors. Our users added 410kg net, over 40% more than the monthly average addition to client gold property since we launched 10 years ago this week. In total this takes BullionVault clients' private gold holdings to a new record total of 33.6 tonnes – more than most of the world's central banks own – all vaulted securely in 5 locations worldwide as each client chooses, and now worth £830 million, some $1.3 billion.
Contrast this strong gold investing with the near-£1bn pulled out of UK stock market funds by private investors in April – a new record on the fund management industry's data. That scared stock brokers into quickly saying how equities are looking just great right now, and anyway, London-listed companies tend to make more money overseas than here in the Election-hit UK. So please stay invested!
Fact is, however, quitting shares ahead of the Election could prove smart whoever wins (or doesn't). Our analysis shows that historically, after the 13 General Elections of the last five decades, shares prices have fallen on average. 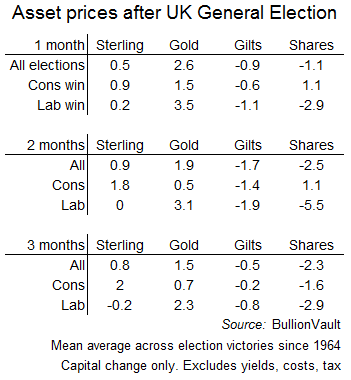 The past is no guide etc etc, and these are only the averages. Mean averages at that. ( See the medians here, with half of all outcomes better and half worse.) What's more, ten of the 13 General Elections since 1964 were held – like this year's – in Spring. So the following drop in equities could simply reflect the seasonal 'Sell in May' pattern.
But the stock market's averages do, however, show an initial rise after a Tory win. Indeed, only 5 times out of a possible 21 have UK equities risen 1, 2 or 3 months following a Labour win since 1964, versus 12 out of 18 under the Tories.
Like the UK stock market, gold prices tend to soften in summer. So gold's average rise 1-3 months after a UK election is notable. It should also challenge any ideas of gold being opposite to equities like Labour is supposed to be the opposite of Tory. Because while gold's mean average shows a greater 1-3 month rise under the UK's pseudo-socialists, the price of bullion actually rose more often during the first 3 months of Conservative governments (13 out of a possible 18 times, versus 11 out of 21 under Labour).
Election 2015 may of course see neither of the big two parties win enough seats to try and form a government. Such uncertainty over the economy's future under a weak government, a fraught coalition, or even a repeated election (please, no!) will likely mean investors stay shy of risk and reach out for safety.
But if there is a clear winner, which political party would be better for asset prices in the long run? You might answer that bigger, global trends are what count. In which case, why bother picking between the parties at all? Did the global financial crisis really have nothing to do with political choices?

Longer-term conclusions are hard to draw, because yes – the averages are of course smoothed out by the last half-century's broader asset price trends. Sterling's exchange rate, for instance, has halved since the mid-1960s, while gold, bond prices, equities and most especially house prices have risen consistently, all outpacing inflation.
Still, Labour's time in office does show a worse average record for Sterling, Gilts and notably the stock market. Check the median too, meaning half of all outcomes were better and half worse.

Gold's mean average gain under the Tories is flattered by the surge after world currencies were de-pegged from bullion in 1971. But UK savers now face similar monetary and political uncertainties to four decades ago, too.
As in the 1970s, the mood music remains interest rates stuck below the pace of inflation to try and boost growth, and to cut the real value of debt. A return of 'stop go' policies is a very real threat, forced this time by big spending promises meeting the need to raise taxes. And neither major party is likely to win a decisive mandate this week, because the nation's broader consensus is splitting.
At a guess, therefore, we think April's strong UK demand for gold may well continue over the summer (more typically a quiet time) as people look to protect their broader investments against a messy, protracted outcome from May 7th. The real mess might then only begin.