END_OF_DOCUMENT_TOKEN_TO_BE_REPLACED

Like the Bank of England, we're not above repeating ourselves. So just where has all the money gone?

IT SEEMS WE'RE NOT the only people trying to figure out where all the money went from this decade's debt bubble.

"Where did all the debt go?" asked Bank of England economist Spencer Dale in a speech last Thursday in Exeter. Sadly for US and British households, however, let alone savers and investors, he had fewer answers than even us here at BullionVault.

"Household debt as a proportion of income increased from 100% to 165% in the 10 years to 2007," Dale noted of the United Kingdom. "[Yet] this big run up in debt was not used to finance a surge in spending," he added, as if taking his cue from our essay of last Wednesday, Economic Dark Matter, and scribbling his speech the next morning as the train crawled through Reading. 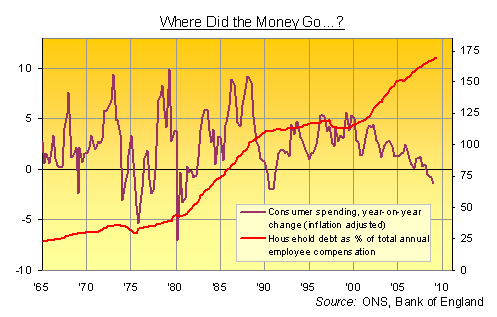 Where indeed...? Because as the chart shows, the surge in Britain's household debt ratio starting 10 years ago coincided with a marked slowdown in consumer spending growth.

In the US, the same picture...with personal indebtedness ticking higher from the same point in time, too. Which hardly seems fair. Just imagine! Borrowing a record multiple of gross income – fully 120% in the US by 2007...and a whacking 170% by the start of '09 here in the UK – just to ease up on discretionary spending.

"In fact, there was no such boom," Spencer Dale went on in this week's speech, pretty much quoting yours truly. But just like his policy-making predecessor, Stephen Nickell, five years before him, he thinks the missing billions – borrowed but not spent in the shops or malls – are explained away by "developments" in the housing market...

"House prices trebled in the ten years to 2007. And mortgage debts were accumulated to pay for the housing that had become so much more expensive. The conventional wisdom that the sharp increase in household debt was associated with the house price boom of the past decade is well founded."

So far, so good. The missing digit in our grand sudoku puzzle – that economic dark matter which forced consumers deep into hock without consumption soaring – lies in house prices. Right? Not quite, says Dale.

"What is less often appreciated is that much of that rise in household debt was matched by a comparable increase in the value of financial assets held by households."

Just like Nickell in late 2004, the Old Lady's man sees a matching asset to balance the debt. Borrowing here must equal new savings there. The volumes, though swollen, still equal each other. Net-net, we all got richer by taking on debt. That's why economists call it a balance-sheet, stupid!

Says Dale, "The value of housing assets purchased by households did increase, through additions and improvements to the housing stock. But the main counterpart to the rise in borrowing was increased saving."

How much more saving...?

"While households accumulated an additional £1 trillion of debt between 2000 and 2008, they also acquired over £750 billion of financial assets over the same period."

Huzzah! Some £250 billion – a mere $400bn, equal to 25% of both the total debt amassed over the period and also 25% of average annual GDP – went missing in the UK debt-savings boom of the early 21st century. Just think how bad the leakage would have got if no one was paying attention or understood what-in-the Simon Cowell was happening here.

Yet here, Dale notes, his figure for asset accumulation "does not include returns from these investments." Just what might that rate of return have been?

Perhaps those assets consisted of simply more property...now down by a fifth from the start of 2008. Or stock-market shares, perhaps...still one-third off their level of 2000 and increasingly foreign owned (35% in 2000; more than 40% foreign-owned by end-2006). Government gilts would have made a half-decent home for the cash gains of those "older households, trading down within the housing market" (as both Nickell and now Dale call them) who apparently got rich from the next generation's indebtedness. But here, as with equities, foreign ownership has risen this decade, not fallen thanks to some crowding out by property profits recycled into government bonds.

So where, oh where, did the money go? Sitting here, four miles west of Threadneedle Street, we really don't pretend to know what's happened, happening, or will happen here.

All we can see at BullionVault is that the historic boom in household debt saw vast sums of money vanish from the data. And a little like losing sight of a shark, that makes us uneasy.

Want to Buy Gold but unsure how best to do it? Make it simple, secure and cost-effective at BullionVault...