END_OF_DOCUMENT_TOKEN_TO_BE_REPLACED

A bubble in debt, yes. But a consumption binge...?

IT'S A COMMON-PLACE of political, investment and bar-room debate that the Anglo-Saxon economies enjoyed a debt-fuelled consumer boom over the last decade or so.

It's more than that, in fact. The consumer-debt bubble is a given...the one sure thing that any analysis builds on, whether it's begging for votes, fund-management fees, or a shared cab-ride home. The US and UK piled more debt onto household balance-sheets than any other nations in history, forgetting to add a balancing item beyond the apparent value of the roof over their heads.

Trouble is, the data don't support it. Worse yet, they don't quite deny it either. Anglo-Saxony now owes a record volume of debt, but the last decade of debt accumulation simply kept consumer spending on trend.

During the early 21st century, in short, something ugly but hidden – economic dark matter – forced consumers deep into hock just to keep pace. 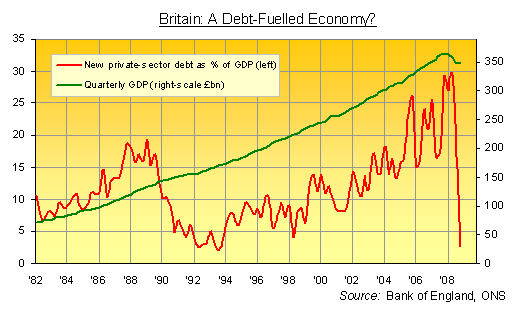 The UK, for instance, added 30 pence of new private debt for every £1 of output at the very top of the bubble.

Not merely 30p for every extra pound. (New debt to growth averaged 4:1 from 2000 to mid-2008). No, private debt-growth peaked at equivalent to 30% of GDP full-stop, accelerating by more than one-sixth each year from the turn of the decade.

Yet household consumption failed to leap higher in tandem, remaining "on trend" from the previous four decades and growing in lock-step with total activity. The extra credit and debt must have gone on funding something else entirely. 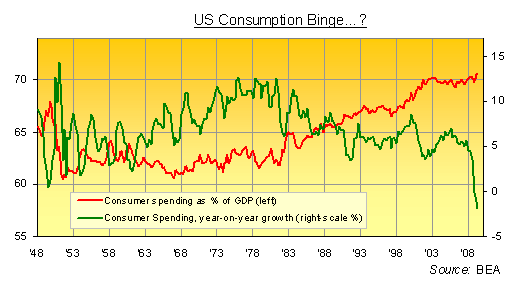 Across the Atlantic, the same story, albeit with different data.

Personal consumption, as a proportion of GDP, broke sharply higher in the last years of last century. It stayed there too, equivalent to 70% of the annual economy, despite flagging in terms of year-on-year growth – and despite increasing in lock-step with GDP across the 10 years to end-2007.

Clearly something's wrong with the maths, but where it's broken the data won't say. It didn't add up five years ago either, back when then-Bank of England policy-maker Stephen Nickel spotted the puzzle...only to dismiss it.

Squaring the circle, Nickel noted the huge leap in UK house prices in terms of income multiples (they still had another three multiples to go from 2004's near-record of four-times salary), but he guessed that "debt accumulation" by one family buying a home typically meant "financial asset accumulation" for the seller, using the proceeds to buy shares or bonds. Thus all was for the best in the best of all debt-driven worlds. Net-net, we were borrowing ourselves richer. 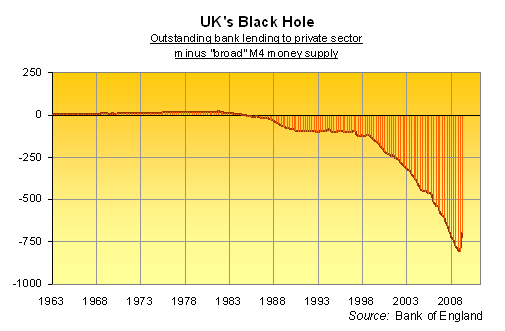 Yet fixing the worst slump since the Thirties therefore comes down, or so everyone assumes, to either reversing a course that never took place...and forcing a "rebalancing" of consumption and output so households can reduce their debt...or reviving a fresh (meaning first) surge in consumer spending with sub-zero interest rates and tax-funded cash incentives.

The likely outcome, we guess here at BullionVault, is both or neither. More urgent for investors and savers, let alone policy pooh-bahs, is identifying quite what the historic burden of debt that households now carry actually financed.