END_OF_DOCUMENT_TOKEN_TO_BE_REPLACED

Europe's central bankers will continue to talk up price stability. But watch what they do...

I know they're stolen, but I don't feel bad.
I take that money, buy you things you never had.
'Free Money', from the album 'Horses' by Patti Smith

THROUGHOUT THIS CRISIS, the European Central Bank has stuck to the mantra that its job is to ensure price stability above all else, writes Ben Traynor at BullionVault.

It has, for example, objected to suggestions that it might fund the European Financial Stability Facility, the Eurozone's 'temporary' bailout mechanism that now looks like it may hang around a bit longer than first anticipated (whether it will have much money to lend to troubled Eurozone governments is another matter).

There are signs, though, that its attitude may be changing. A considerable gap has opened up between the ECB's rhetoric and its action, with central bankers talking tough on inflation while pursuing ever looser policies. This disconnect was plain to see on Monday when ECB president Mario Draghi addressed the European Parliament in Brussels.

"The Governing Council of the ECB," said Draghi, "is determined to ensure that inflation expectations continue to be firmly anchored in line with our aim of keeping inflation rates below, but close to, 2% over the medium term."

So far, so anti-inflationary.

Draghi is not wrong. The chart below looks at money supply in the Eurozone, the UK and the US over the last two years. The vagaries of money supply data mean the comparisons are not exactly like-for-like. The US Federal Reserve, for example, stopped publishing its M3 broad money measure in 2006. The Bank of England meantime does publish an estimate of M3 for the UK, following the methodology used to calculate Eurozone M3, but by necessity it involves a degree of estimation.

Nonetheless, if we index each series we can see that Eurozone money supply (the blue line) has been more stable than that of both the US (green line) and Britain (red line): 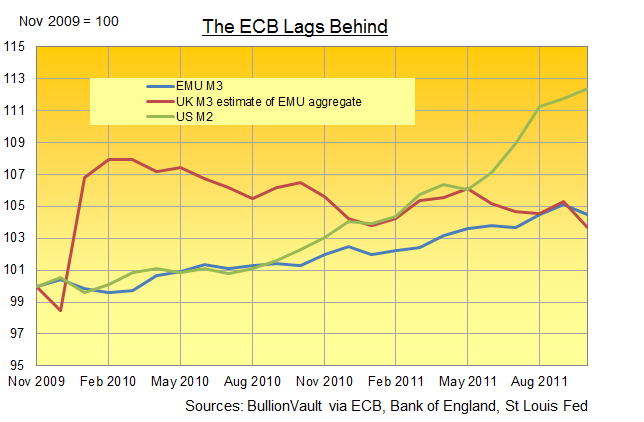 US money supply appears to have merrily grown throughout the period, while the effects of the UK's first dabble with quantitative easing in March 2009 can be seen coming through nine months later (and, of course, though the effects are not known yet the Bank in October expanded its QE program, and may do so again if the latest Monetary Policy Committee minutes are anything to go by).

The problem for the ECB and its pursuit of price stability is that its "moderate" pace of monetary expansion may well be a key reason why the Eurozone has ended up as the epicenter of the global financial crisis. Because while the Fed and the Bank of England have gone to historic lengths to get funds to where they are desperately needed – the banking sector and (whisper it) government – the ECB has lagged behind.

There is a phrase we use here at BullionVault to sum up what we believe to be the most likely ways out of the ongoing crisis: Default or Devalue. In the absence of meaningful economic growth, existing debt burdens will either be defaulted on, or they will be repaid once their real values have been sufficiently eroded by inflation.

By standing in the way of the latter, the ECB has arguably made the former seem much more likely – hence the Eurozone debt crisis.

But things have changed. Now that Old Man Trichet has shuffled off into retirement, Super Mario can finally open the spigots and (he hopes) prevent liquidity-starved Europe from collapsing into a morass of sovereign defaults and bank failures. This would explain why, as well as restating the ECB's anti-inflation priorities, Draghi was keen to tell the European Parliament about "the latest non-standard measures" from the ECB.

These include a €40 billion covered bond purchase program, a reduction in the amount of cash banks are required to hold at the ECB and a "temporary expansion" of the list of collateral that banks can put up when borrowing from the ECB (banks, it would seem, are running low on decent assets – or else they just don't want to risk them. So the ECB will accept collateral of ever-more questionable value, including the very Eurozone government bonds that have caused it – and its balance sheet – such grief already).

And, on Wednesday, we had the Big One. The first of the ECB's three year Longer Term Refinancing Operations (LTROs) – whereby Europe's banks could borrow money for three years at interest rates of 1%, and against iffy collateral to boot.

"This is basically free money," one banker in Germany said before the result of the LTRO was announced.

"The conditions are unbeatable. Everybody who can will try to get a piece of this cake."

He was not wrong. A total of 523 institutions borrowed €489.191 billion – higher than most analysts had predicted (and more than the original lending capacity of the EFSF, which maybe tells you something about politicians' and technocrats' ability to appreciate the full scale of a crisis).

The announcement saw stock markets sell off – possibly because it is an indication of just how bad a state Europe's banking system is in. The Euro's recent rally against the Dollar also went into reverse, while Gold Prices – which have moved closely with the Euro in recent days – also fell from their week's high.

It seems very much as if Europe's central bankers are now looking to catch up with their Anglo-Saxon peers, choosing (whether consciously or otherwise) the Devalue option rather than run the risk of Default. But it will probably be a while until the rhetoric changes.

Earlier this week, Germany's Bundesbank grudgingly agreed to contribute an additional €41.5 billion to the International Monetary Fund, but only on condition that the money was not earmarked for Europe.

The Bundesbank is fooling no one. It must realize there's a very good chance that, some time in 2012, a phone will ring at the IMF's Washington headquarters:

"The Lagarde residence, the lady of the house speaking...Oh it's you Spain, how can I help...Hang on one moment, I've got Italy on the other line..."

Still, the central bankers get to say, with as straight a face as they can manage, that they are not directly financing government debt.

If it turns out that the world does become awash with fresh Euro liquidity then, unless gold decouples from the single currency, this could be a bearish development for the yellow metal. Eventually, though, investors must surely realize that there is a world of difference between a tangible asset value for thousands of years and a political project that looks like it could come undone after little more than ten years.

The debt crisis shows little sign of coming to an end. And history shows us that when debt crises are eventually resolved, it tends not to be good news for the creditors.