END_OF_DOCUMENT_TOKEN_TO_BE_REPLACED

Dividing the Dow Jones index of stocks by the Gold Price 80 years after its low...

A LOT OF PEOPLE pay close attention to the Dow/Gold Ratio, writes Adrian Ash at BullionVault. You might want to take a look this Fourth of July, too.

This blunt measure of stocks versus stuff gets nearly 5 million results on Google, posting some 650 unique stories on the Dow/Gold Ratio. Search volumes for the term "Dow Gold" don't quite match "Kim Kardashian" say, over the last 5 years (nor even "Reggie Bush"). But spiking in late 2008 and mid-2011, they very nearly matched search volumes for "Treasury bonds" – a market priced at twice the value of all the gold in the world. So why the interest?

The Dow/Gold Ratio maps, over time, how the Dow index of US stocks is performing in terms of gold, rather than just in nominal dollars. Dividing the number of points in the Dow Jones Industrial Average by the Dollars in the Gold Price per ounce is simple enough. The aim is more complex – to show how investing in corporate America – the "world's most successful economy", as Harvard professor Niall Ferguson reminds us – is doing versus a lump of non-yielding, relatively useless metal that does so little, it doesn't even rust. 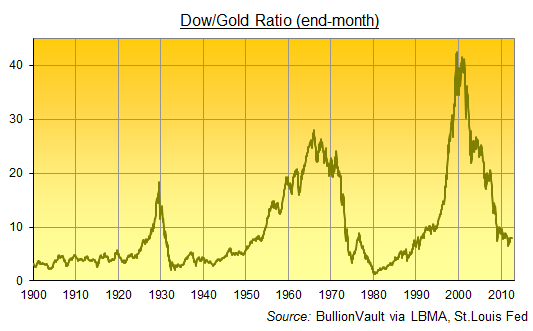 Investment in Corporate America was doing very badly 80 years ago today, for instance. As the Great Depression really got motoring, the Dow/Gold Ratio marked Independence Day by dipping to its lowest reading since 1900, just after the Dow Jones Industrial Average was first born.

That Friday, 8 July 1932, the Dow closed at just 41 points, while the Gold Price held firm at $20.67 per ounce, then its official price as mandated by the United States' Gold Standard Dollar. Priced in gold (which was still money back then), the US stock market dipped below 2.0 – and showed a drop of over 90% from its peak of only three-and-a-half years before, hitting what then proved its lowest level of the 20th century.

Yet US Inc. came to do worse still compared to the Gold Price in January 1980, however, when the Dow/Gold Ratio fell to just 1.0 – down more than 96% from its new record high of New Year 1966. So today's equity investors might take heart from the last 10 months' turnaround. Because sliding from the Tech Stock Bubble's new all-time peak above 40, the Dow/Gold Ratio has risen after hitting a two-decade low beneath 6.5 in September 2011.

Indeed, the Dow Jones index has outpaced the Gold Price by 25% since last summer. Just think what the outperformance would have been if, say, Apple had been added to the Average instead of, say, Cisco when the Dow was last updated in 2009.

But that's the problem with taking the Dow as a serious guide to anything much. Or so say its detractors, and they have a point. Or five.

While it's not immutable – as gold is – the Dow Jones index still changes little, despite the changing fortunes of America's biggest stocks. The Dow also includes only 30 out of the thousands of listed stocks traded on US exchanges, and 30 hand-picked stocks at that, chosen by a committee with few hard rules. Nor does the index weight those 30 stocks by their size in the market. Instead, it adds up their share prices, and then divides by a "Dow divisor", an arbitrary number (currently 0.132129493 according to the Wall Street Journal) which itself has to be changed any time there's a stock split or switch in the membership. That means that highly-priced stocks have more impact than lower-priced stock in much bigger companies.

So as a guide to corporate America, the DJIA falls short. But are broader indices – weighted by market capitalization – any better? 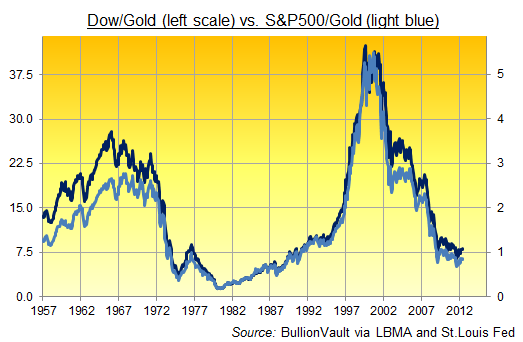 Not much to choose between the DJIA and the more inclusive, more rigorous S&P 500 index then. Not when they're used to judge equity investing against Buying Gold. Indeed, the Dow has performed less badly against gold since its all-time top than the broader index has. One ounce of gold now buys 5.1 times as much Dow index has it did in mid-2000, ignoring transaction costs (first into cash and then into stocks). But it buys 6.4 times as much of the S&P 500.

The Dow/Gold Ratio thus captures in a very broad way how badly money invested in productive, go-getting America has fared versus the ultimate lump of do-nothing, get-nothing-but-avoid-absolute-loss stuff. Gold has clearly been the perfect place to bury your savings as the returns to equity capital have been overwhelmed by the risks. That's also made the Dow/Gold Ratio the perfect long-term indicator for über-bearish equity bears.

"I would expect this out-performance [in the Gold Price ] to continue for the next few years," said Swiss wealth manager and Asia-based author Marc Faber in 2005, five years after the Dow/Gold Ratio began its descent. In the end, he forecast, "Gold holders will be able to buy one Dow Jones with just one ounce of gold." But by early 2009, Faber had revised his opinion – "One day the price of gold will be higher than the Dow Jones," he told a Barron's roundtable that January. That same 1:1 ratio – seen briefly in early 1980 as the Gold Price peaked and US stocks headed towards what proved table-banging chance to buy cheap – also appeals to fellow stock-market doomsayer Bob Janjuah of Nomura (see Nov. 2011, or March or April 2012).

"The US Dollar price of an ounce of gold and the Dow will, I believe, converge at or around 1, at some point over the next 2 years or so. I have extremely high conviction on this. What I am not sure on is whether we converge at 7000, or at 14000."

Put another way, the Dow could hold where it is, or halve in value. The Gold Price will be many times higher either way on Janjuah's analysis. (We can't find him daring to imagine parity might be lower. In that event, with cash itself surging in value and driving the mother of all deflationary depressions, owning gold at a price of say $1000 would likely appeal to very many more people than trusting Dow 1,000.)

Now, you might think appealing to the Dow/Gold Ratio for an equity forecast pretty lame. Especially if you appeal to the ratio's all-time record bottom as if some iron law of history says that the early 1980s' low must be revisited before the bear market in stocks is done. It didn't even get there during the Great Depression!

What's more, mean reversion would suggest gold is already over-priced and stocks are cheap, with both the Dow/Gold and S&P/Gold Ratios now sitting at just 50% of their half-century averages. So less apocalyptic analysts might pick a less dramatic extreme turning point (as this one did in February 2009). Less aggressive investors might also want to avoid trying to nail the very lowest low, making do with the 6-fold rise in gold's equity value already seen since 2000.

Thing is, there would be another 6-fold rise on the table if the Dow/Gold Ratio did fall to 1.0 – and even if, buying early ahead of the ultimate cataclysm in stocks, you missed the bullet of failed corporations (the New York Stock Exchange contracted by 1-in-14 listed equities during 1929-1933, and by 1-in-28 during 1978-1982), then the unlisted brokerages holding your stocks for you would still be sure to struggle as the equity market sank. Buying Gold gets you off-risk for anyone else's financial failure, giving you price-risk alone and free from the danger of absolute loss.

That's what drove the Dollar Gold Price per ounce to parity with the Dow in 1932 and 1980. If it gets there again, having the guts to make the switch from preservation to equity-risk will be a rare thing indeed.

Investing in Gold today...? Make it simple, secure and cost-efficient like nowhere else using the world's #1 online, BullionVault...