END_OF_DOCUMENT_TOKEN_TO_BE_REPLACED

Unhappy Columbus Day thoughts as the US bears the cost of the banks losing Glass-Steagall...
COLUMBUS DAY is typically a happy and joyous celebration for Americans wherever they are, writes Miguel Perez-Santalla at BullionVault, not just in the United States, but on all continents.
Inadvertently discovered by Europeans looking for Asia, the mess which resulted has become central to the world community, and critical to its economy. In the last century, and led by American ingenuity, the world has grown much smaller due to technology and improvements in transportation. In this last decade, and again led by North American entrepreneurs, mass communication through use of the internet and the lower costs of regular telephone systems has made the world a much smaller place again.
You would think that North Americans were joyful for their history on Monday, Columbus Day 2013. But sadly there are many that are not happy. The truth is that the great experiment which is the United States of America is starting to falter. The government shutdown is only a symptom which carried into this holiday, pointing to all the deficits of our political and financial system.
This Columbus Day there were protesters against the shutdown, but even more against how the US government and how it is running. It's no longer Democrat versus Republican as the media makes it appear. Both parties have been found untrustworthy in their responsibilities toward protecting their fellow citizens. And the driving force of American wealth and freedom over the last two centuries, the thrifty middle class, are subjected most to taxation and destruction of their economic liberties.
So this Columbus Day an organization known as the LaRouche PAC was out in force trying to get support for their goal. This is to reinstate the Glass–Steagall act under HR 129. 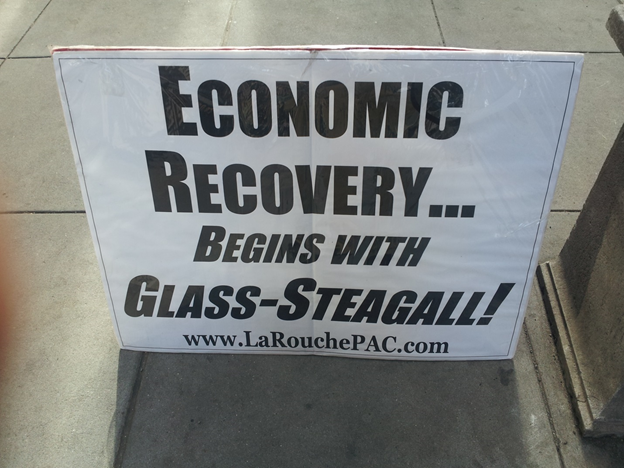 What the Glass-Steagall act would do is what it did for more than six decades before its repeal. This 1930s' piece of US law would ring-fence the deposit areas of banking, so they could only be involved with traditional banking services. Investment banking services on the other hand, such as broker dealers, investment companies, underwriters and investment advisers would be completely separate entities. This is important because it is a structural change and would directly and immediately protect the public sector from any possible malfeasance and conflicts of interest.
In addition I would go as far as to say that we should not have national banks. These giant organizations should be broken back down to independent state banks that may be owned by one parent company. In this way the State banking commissions would have greater power to police the industry. And at that level it would also be more manageable.
There is no doubt in my mind that the current malaise which the US economy continues to suffer is in no small part due to the removal of this important piece of legislation in the late 1990s. It had been created during the time of the Great Depression, along with other changes, aimed at keeping banking in banking, and investment for investors.
America's 21st century crash and depression has also spawned US legislation created to protect the public from banking-led chaos. But Dodd-Frank does not address these issues. In essence, it has changed very little of how the banks operated in the pre-crisis bubble, allowing them to continue down the same path. Most of this new legislation is toward the types of contractual business which banks can engage in. None address the issue of banks being too big to fail. And at this time they can still take regular savings depositors with them if they go bankrupt, not only those interested in investment risk for better returns. In other words, the American people continue to be responsible for the large banks and their possible poor investment scenarios.
Indeed, what Dodd-Frank creates is even worse. Due to the new legislation, the financial jobs that did exist here domestically in the USA, are now being chased offshore. So now not only are the American people still paying for the poor judgment of our government and our bankers in the last two decades, but we are losing jobs to boot.
The government, the Federal Reserve System and the leaders of the major banks in the US are directly responsible for past errors, and for those coming ahead. The reinstitution of Glass-Steagall would be a good first step in the right direction but by no means would it cleanup all problems in our system.
The Federal Reserve System’s current agenda is to protect the banking sector at all costs. That is why if you look since the beginning of the crisis in 2008 you will see that banks have come up from under the ashes and have performed better because of free money handed to them through the system. In the end the money is acquired from the public through an invisible form of taxation – the loss of value from their stocks or other holdings in the marketplace, and of course the well hidden devaluation of our currency against other goods.
Without a fundamental change to the way our banking system works we are still open to another crisis. What is historically rare is that, unlike the changes forced by legislation after previous financial crises, we are still exposed to an exact repeat, as banks use depositors' money for higher-risk investments. The government shutdown has no teeth in finding solutions to the real underlying problems of this country. Many Americans are disenfranchised as we continue to see support for the status quo in the banking industry. Without solutions to how our banking system works, all other issues are but mere distractions. They hide the real illness behind the behemoth that has become the federal government bureaucracy.
On Columbus Day I took a call from a prospective customer of BullionVault. She had never bought gold or silver in her life. She stated to me the reason she is going to invest in gold now. "I don't like the way things look in the US. There's too much unemployment and unrest."
With Dodd Frank missing the chance to make structural changes, and instead focusing on increased regulation set to push key services abroad, the banking paradigm has not changed. Now the public is feeling less confident. When there is a lack of confidence there is always one asset which brings some security.
From ancient Mayans to the Conquistadors, from central banks to sovereign wealth funds today, when you buy gold it remains gold, a form of value accepted all over the world and throughout history.
That will not change no matter what financial crisis strikes the Americas next.