END_OF_DOCUMENT_TOKEN_TO_BE_REPLACED

Ten years here, a decade there, and pretty soon you're losing real wealth hand over fist...

WHAT A DIFFERENCE a decade can make! Over the last 10 years of the 20th century, anyone buying and holding US stocks made a total return approaching 18% per year.

But roll forward ten years, and the total return on the S&P500 was actually negative for the decade ending on 30th June 2008.

Yes, you read that right. For the 10 years to last Monday, the S&P index delivered less than zero. That's even after accounting for dividends (good) as well as inflation (bad).

US equity buyers just suffered a "Decade of No Returns" in short. Looking back to the late Nineties from the late Noughties, it barely seems possible.

The S&P enjoyed two strong bull markets during that time. The first added nearly 50% in the 18 months following July '98; the second delivered more than 87% in the five years to Sept. '07. All told, the S&P rose in 69 months out of 120 – and yet anyone holding the 500 stocks included in Standard & Poor's index just wound up with a total return of sweet fanny adams.

Whatever happened to holding stocks for the long term?

"[The Noughties] are well on the way to being the worst decade for stocks since 1930-40, back when things were really messy," says the Wall Street Journal. It cites a note from Richard Bernstein, chief investment strategist at Merrill Lynch, who spotted this Decade of No Returns last week.

Even "the somewhat more-bullish Tobias Levkovitch, chief US strategist at Citigroup, pointed out recently that the S&P 500 returned just 1.66% from 2000-2007," the Journal goes on.

"He notes that all of the returns so far this decade have come from dividends; price return is slightly negative." 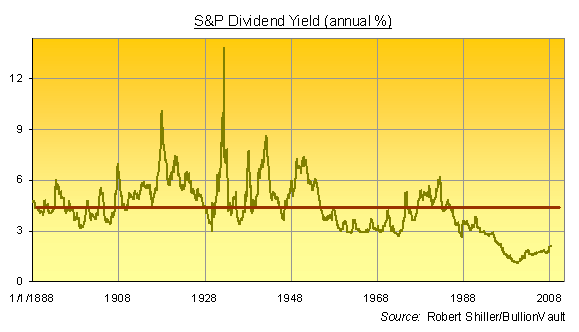 It should little surprise us. But while US equity investors saw the S&P's valuation rise more than four times over during the 1990s, its 500 constituent stocks didn't actually pay out four times as much in dividends each year.

Indeed, the capital gains enjoyed by Nasdaq and S&P owners between Jan. 1990 and the end of 1999 came at the cost of decent yields offered to new stock-market buyers. That decade saw dividend yields on the S&P fall in half, according to data from Robert Shiller at Yale University – down from 3.3% to below 1.15% per year.

Any wonder the derriere eventually fell out of the "Long Boom" at the start of this decade? By way of comparison (and as marked on BullionVault's chart above) the long-run historic average sits nearer 4.3%.

That's the long-run average running back 120 years and starting in January of 1888.

The equity bull market of the 1990s, in other words, stands out as something of an aberration...an "outlier" event as dramatic in its own way as the stock-market wipe-out of the 1930s. But while the Great Depression took stock prices so low, dividend yields shot up towards 14% per year, the vanishing yields of the 1990s needed the bear market of 2000-2003 to set things right.

Only, of course, it didn't. Yields slumped as earnings fell, and they stayed slumped as the Tech Crash drowned financial, industrial and retail stocks in its wake. S&P dividends fell lower right alongside stock prices. Meaning that, even at the low of Oct. 2002, the dividend yield offered by America's 500 biggest corporations remained well below 2.0%.

Fast forward to mid-2008, and the gap between what you might now earn in dividends and what investors have traditionally expected remains very nearly as wide as it was throughout the 1990s. The upshot? Unless things really are different this time, and investors are willing to buy stocks that pay less than half the rate of inflation – and less even than US Treasury bonds! – then the current bear market might be expected to roll on for a while longer yet.

Why? Because to push this decade's dividend-yield back towards the long-run historic average, the annual pay-out from S&P stocks would need to reach a staggering and never before witnessed 19% – and stay there – for the next 18 months.

Short of a market-wide "earning surprise", plus a dramatic reversal of executive attitudes towards sharing those earnings with investors, you can guess what this would mean for stock prices, currently offering a little over 2.1% per year in dividend yield.

If not, they're likely to continue swapping stocks for other investments until the return offered by equities gets somewhere near to its historic average – more than twice the current level today.