END_OF_DOCUMENT_TOKEN_TO_BE_REPLACED

Except when it does...

YOU'D THINK that with all this practice, politicians would know how to handle a banking crisis by now, writes Adrian Ash at BullionVault. Most especially in the Eurozone.

But no. Five years since Bear Stearns hit the skids (the anniversary was Monday) the Cypriot mess is such a mess that people elsewhere feel the urge to say that "it couldn't happen here."

Portugal's finance minister said it Tuesday afternoon. Italy's Il Sole 24 Ore newspaper said it Tuesday morning. Yet a raid on banking deposits already happened in Italy, a mere 21 years ago for a 0.6% hit across all accounts. Italy applied a hit of 4% or so back in 1920 as well, when the Czech government, Austria, Germany and Hungary all tried the same move too. Norway made a grab for savers' cash in 1936. Brazil and Argentina used the gambit – raiding savers' accounts for emergency cash – a little over a decade ago.

Still, it could never happen, right? 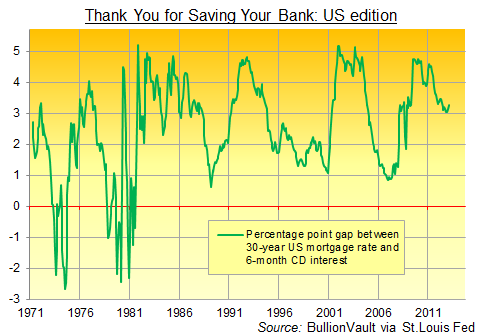 "Protect the small savers" – barring the more recent examples above, that has been the mantra of policy wonks and politicians dealing with bank failures since the Great Depression 80 years ago.

Customers of Bear Stearns barely noticed the change, for instance, when it collapsed into the warm, taxpayer-funded embrace of J.P.Morgan for just $2 per share on 18 March 2008. Because amongst major-currency nations, the preferred route to whacking the little guy – and getting him to pay for the banks' excesses – has been via interest rates, as our chart above shows.

Get borrowers to pay way more than depositors earn, and post the difference straight to your bottom line. Throw in negative real rates on bank savings and government bonds – courtesy of central banks squishing rates below the pace of inflation – and the same scam can help entire economies chip away at the real value of their public debt, too.

But this rule – the rule of hiding the theft from savers – finally broke Saturday morning. To get a bail-out from the rest of Europe, the government of Eurozone-member Cyprus agreed a 9.9% levy on anyone with €100,000 in a Cypriot bank. Most amazing, small savers are no longer sacred. They would be hit for 6.75% on deposits below €100,000.

The FT called this a stupid idea whose time has come. Paul Krugman writing in the NY Times said "It's as if the Europeans are holding up a neon sign, written in Greek and Italian, saying 'Time to stage a run on your banks!'" The UK government, ever eager to pretend that we Brits are immune to bank-account losses, is shipping out €1 million in cash to help pay our armed forces stationed there, and it has promised UK tax-payers will make good any loss the troops might suffer on their Cypriot deposits in just the way that we all shared the £100m cost of making UK users of high-yielding Icelandic banks whole in 2008.

Heaven forbid anyone should say that such high-paying bank accounts should have been warning enough. Like Felix Salmon says, a promise is a promise, and Cypriot savers had bank-account insurance up to €100,000. It's just not fair!

A few other talking-heads meantime guess – as we do – that the initial "levy" was a dummy, intended to make the real savings tax look much less drastic. But lots of people also note that Russian mafia money, a huge part of Cypriot banking, will see its 9.9% levy as just a cost of doing business. The island's reputation as a money-laundering centre will be intact, at the cost of hurting the little guy.

Cyprus accounts for just 0.5% of the 17-nation Eurozone economy. The proposed levy will raise perhaps €5.8 billion, just $7.5bn. Yet the Eurogroup's action has already seen stock markets sink, along with the Euro. The gold price in Euros jumped 2.3% at the start of Asian trade Monday morning, and has since jumped again as the chaos in Cyprus's rescue gets worse.

Now, this is very much a crisis in motion. The Cypriot finance minister, for example, may or may not have resigned Tuesday whilst visiting Moscow to discuss Russian aid and bank savings. And as we say, odds are that the levy on small savers will yet be cut, altering the terms to make whatever deposit-grab is left more acceptable. But either way, the big lie behind the financial crisis so far – that bank savings are safe – has blown up again.

Putting cash on deposit makes you a creditor. And in financial crises, the creditor always pays in the end, whether through inflation, default or a "levy". Holding a little physical gold exposes you to price movements. But it gets a chunk of your savings away from the myth of bank-account security. Hence the jump already this week.

Even without that price move, gold still makes sense as a physical escape from all-too ephemeral banking. Of which in Nicosia, London, New York and Frankfurt there remains way too much.