END_OF_DOCUMENT_TOKEN_TO_BE_REPLACED

YOU CAN BLAME speculators, poor weather, global demand, or the Federal Reserve if you like, writes Adrian Ash at BullionVault. Either way, sugar's up, wheat's up, and cotton's new record highs are starting to hurt Chinese textile makers.

Hence this bale in the wind. Clothing and footwear prices to UK consumers rose year-on-year in September for the first time since March 1992, hitting a two-year high in absolute terms. 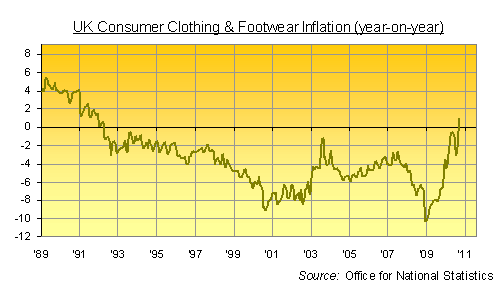 Yet only now do central bankers fear deflation ahead. C'mon...where do they find these people?

"The longevity of what appears to be a speculative bubble in cotton prices," will determine 2011 profits at UK clothes retailer Next, it warned this week, adding that rising costs will force it to raise shop prices.

Over in China – which uses some 40% of the world's raw cotton output...and accounts for one-third of global textile exports – textile manufacturers face a "shortage of raw material", said industry group the China Federation of Logistics and Purchasing meantime, with last month's record-high prices "endangering" their survival.

For our money here at BullionVault, we'll blame loose monetary policy...and not just from force of habit, either. The Pound Sterling, like the US Dollar, looks further than ever from paying a positive real rate of interest – leaving both savers and merchants to price scarce resources in ever-depreciating, ever-more generously supplied currencies.

Short of an about-turn in monetary policy, the near-halving of UK clothing and footwear prices since 1989 appears finished.

Got gold? Got silver? Start now with a gift of free metal, stored securely in Zurich, Switzerland, using BullionVault...