END_OF_DOCUMENT_TOKEN_TO_BE_REPLACED

Living standards in the West are certain to fall as Asian wealth grows...

IT'S NOW five years and $1.7 trillion of Chinese foreign-currency reserves since the People's Bank ended a decade-long peg to the Dollar, writes Adrian Ash of BullionVault.

Throughout the mid-to-late 1990s' Asian Crisis, and again as the US currency first began its long decline in the early Noughties, Beijing had defended 8.3 per Dollar. Its rising power – plus grumblings from trade partners – made some level of appreciation inevitable, but only if Beijing kept it strictly controlled. So back then, as today, China refused to even begin making the Yuan freely convertible – and thus accessible to foreign investment – but for very different reasons.

The fear when China carefully recalibrated its Dollar peg in 2005 was of foreign speculators driving the Yuan lower. Whereas in 2010, it's got the opposite problem. Grabbing export share (and that mountain of foreign-exchange reserves) by suppressing its currency way below any measure of "fair value", Beijing clearly fears a repeat of the Japanese bubble-and-bust that followed 1985's Dollar-weakening Plaza Accord. Because since first loosening the Yuan's Dollar peg (if only a little) half-a-decade ago, China has overtaken Japan as the world's No.2 economy, and become the world's top importer of copper, biggest user of cement, No.1 consumer of energy, edible oils, soybeans, rice and wheat, and the No.2 destination for physical Gold Bullion.

Yes, China's currency should reflect this growth, at least according to non-Confucian theories of floating currencies and trade rebalancing. No doubt it will in due course, too. But if US Treasury Secretary Tim Geithner were to get his wish at the G20 meeting this weekend – which he won't, not yet – and the Chinese Yuan did bear a greater share of the Dollar's global devaluation, Beijing's impact purchasing power in the food, energy and mineral markets would only grow greater.

So where Timmy might want to watch out is that the appreciation in China's purchasing power must come at the expense of today's freely convertible currencies. 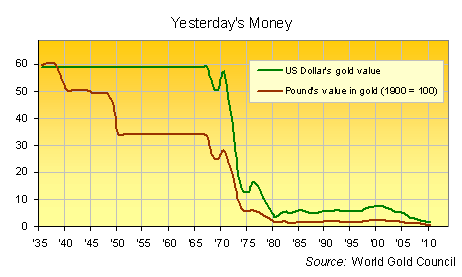 First, Beijing likely holds some $2 trillion or more of the "big four" reserve currencies – Dollars, Euros, Sterling and Yen. Gresham's Law says it's more likely to spend those holdings ahead of its own, increasingly valuable money, as it buys ever-more food, energy and mineral resources to meet its surging domestic demand for a better standard of living.

Second, and should the Yuan extend its global usage from this year's McDonalds' bond float to central-banking reserves, the relative loss of purchasing power in Dollars, Euros, Sterling and Yen will only accelerate further. Together, the Big Four account for 96% of forex reserves according to the IMF, but that's the lowest proportion since before the late '90s Asian Crisis – a crisis which Beijing managed to avoid but remembers all too well. 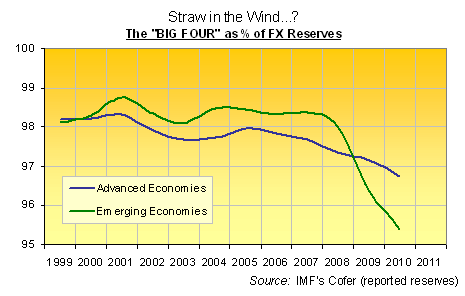 Third, and most critically amid the global currency war – a war which will not be settled over the conference table for as long as Western central-bank policy remains fixated on currency inflation – flows of "hot money" are rightly expected, not least from US, UK and Japanese wealth fleeing zero-per-cent rates at home.

As it is, China is gently loosening controls on money outflows, but only a little, and actual outflows of Yuan remain blocked. So trying to preserve its global value, retained wealth in the West cannot get direct exposure to the currency (nor the equities at present) which will increasingly put a price on the biggest trend of the 21st century – the Eastward shift of global demand and consumption.

Even if China does liberalize (which it won't any time soon) retail investors will be last in the queue. So a fair proxy, meantime, remains buying hard assets and natural resources. It also gets to the heart of the problem, because living standards in the West (by way of our global purchasing power) are certain to fall long-term. Asia's growing use of world resources must come at our expense, in just the same way as the Pound Sterling's first fall from top-dog currency status – starting some seven decades ago, and running pretty much ever since – made for a relative loss of wealth to the United States.

Most clearly amid the currency turmoil only just getting started, China's ever-growing demand for Physical Gold and silver highlight that big, fat 21st century trend in action. By the time (if ever) that Yuan deposits become widely available through retail banking in the US, Eurozone, UK or Japan, this morning's $1319 price-tag on gold might look a great bargain.