END_OF_DOCUMENT_TOKEN_TO_BE_REPLACED

...and he stood six-foot-seven-inches tall...

...a little over 2 metres from shiny shoe to shiny-domed top.

Volcker's successor Alan Greenspan took over in 1987. He stood around 6 feet tall. He famously cut rates to just 1% after the Tech Stock Crash of 2000.

Greenspan's successor Ben Bernanke then got the top job in 2006. He was around average height at 5'9"...

...and he slashed rates lower still amid the global financial crisis...

...and she saw longer-term bond yields continue their slide, even as she edged the Fed's own key rate slightly higher.

See the pattern? Apart from the fact that all these people were white and only 1 wasn't male? 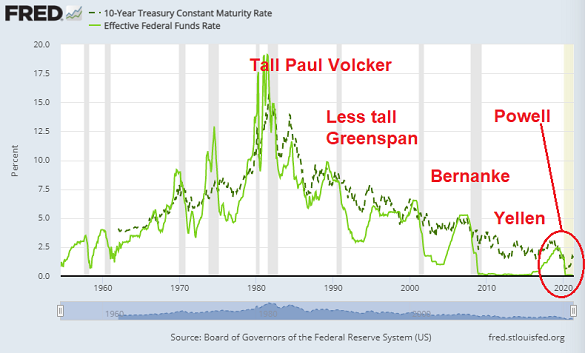 The shorter that the world's No.1 central-bank boss gets, the lower that interest rates fall.

But now US rates are stuck at record lows near zero. Yet current Fed chair Jerome Powell measures over 5-foot-11.

Time for a new boss? Or time for a rate hike?

"We don't actually believe that interest rates are determined by the height of the Fed chair," says LPL Research of what is clearly a crazy and stupid comment. Just a bit of fun!

"But it has been an interesting coincidence."

LPL first posted this sweet cartoon of US central bank's bosses against long-term interest rates back in 2017.

Today in 2021, Powell's current term as Fed chair won't end until February next year. But "decisions on Fed leadership are typically made well in advance," as politics website Politico notes.

And while no one in Congress has yet mentioned his being too tall, the campaign against Powell getting a second term has begun in earnest.

"If you care about regulating Wall Street, then oppose a Powell renomination," write a couple of think-tank researchers, urging new US President Joe Biden to find a different Fed boss.

"If you care about the climate, then oppose a Powell renomination," they add, listing examples of his "apparent objections to Biden's core policy goals."

Last but not least, "If you care about racial equity, oppose a Powell renomination."

This charge looks likely to set the debate alight as summer turns into autumn and the question of Powell's second term starts to grab the front pages.

"In one of the many executive orders Joe Biden signed on his first day in office," explains a 'free market' think tank, "the President promised an 'ambitious whole-of-government equity agenda' to fight 'systemic racism'.

"This includes the prospect of instrumentalizing the Federal Reserve's control over monetary policy to equalize wealth across racial categories."

I shan't rehearse the arguments here. But Biden and his vice-president Kamala Harris pledged in their Election 2020 campaign to "strengthen the Federal Reserve's focus on racial economic gaps...enhance its surveillance and targeting of persistent racial gaps in jobs, wages, and wealth...[and get regular updates on] what actions the Fed is taking through its monetary and regulatory policies to close these gaps."

But at the same time, fixing all this sounds like a mighty big ask for monetary policy. Because some things need more than a 25-basis-point cut to interest rates.

Central bankers everywhere, however, all agree that they just helped save the world from Covid by slashing rates and throwing trillions in newly-created cash at buying government bonds.

And just talking about race-wealth inequality could help reduce it, according to some pundits and policymakers. Which is good news for central bankers. Because talk, like the money they keep creating and throwing at the world, is cheap.

And thanks to their cheap-money-cure for Covid, they are now being charged with fixing all manner of social ills on top of boosting the economy and avoiding financial market collapses. 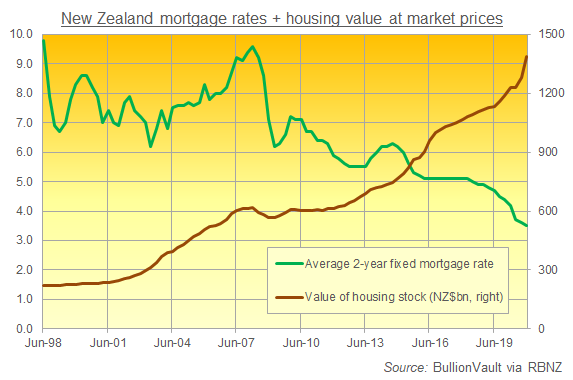 See how, over the last decade, mortgage borrowing rates in New Zealand have fallen in half?

See how the value of New Zealand's housing stock has more than doubled?

You can guess what that means for first-time buyers in terms of debt-to-income...

...because average wages have risen only by one-third since 2010.

Something. Must. Be. Done.

"If you're asking me 'Is it right, what's happened in the New Zealand housing market?', my answer is 'No'."

So said New Zealand Prime Minister Jacinda Ardern last month, explaining how the massive (notional) gains in her own house price justify the moves her government is making.

Investment buyers can no longer get tax relief on their mortgage costs. Loan-to-value limits have been imposed on mortgage lenders. House prices have yet to crash. But then, of course, interest rates have not gone up. Because that would, quite literally, raise the cost of buying for new entrants.

"Positively," says the Reserve Bank...now tasked with do-something-about-house-prices by Ardern's team in Wellington..."a moderation of house prices on its own would be unlikely to pose a significant risk to the soundness of the banking system.

"[But] mortgage borrowers, particularly those who entered the market recently, are vulnerable to a rise in interest rates."

Best not raise rates then, eh?

"[Now] I am updating the Bank of England's remit to reflect the government's economic strategy for achieving strong, sustainable and balanced growth that is also environmentally sustainable and consistent with the transition to a net zero economy."

Here again...and amid much green-energy chatter from the Bank...any sign of raising interest rates looks a long way off.

Oh sure, slower economic growth would probably slow energy demand and fossil-fuel use. CO2 emissions sank in 2020 as Covid crushed global output. But new tech development and infrastructure hardly beg for the cost of borrowing to rise, do they? Certainly their promoters don't.

Instead, the link between government and central-bank money with private initiatives will only get fatter from here. Provided your plan is politically approved.

"This is a real game changer for Europe...a historic opportunity," reckons Olaf Scholz, German Vice-Chancellor and Minister of Finance.

"EU member states have joined forces in a spirit of solidarity to fight Covid-19 and to promote the ecological and digital transition.

"Our era is comparable to the 19th Century, when railways were created with an important role for the state."

History buffs might shudder at how railways and the state then worked together as the 20th Century began...

...but Herr Scholz sees only good things in the government throwing money at projects he likes, no doubt run by people he also likes too.

Magic money from the central bank, after all, saved the Euro-union project from political implosion a decade ago as the global financial crisis morphed into the Portuguese, Italian, Irish, Greek and Spanish debt crisis.

"Whatever it takes," to quote then ECB chief Mario Draghi, now tasked with saving Italy from itself. Because if central bankers could save the Esperanto currency, surely they can rescue the Eurozone economy too.

Back at the US Fed meanwhile, the call from Biden-Harris to close America's racial gap through monetary policy "really would put an alert on the Fed about tightening too early," says Narayana Kocherlakota, a former Fed president and now a professor of economics.

In its rawest form, he's saying that poor people need cheap loans too...

...something which the Republican government of Dubya Bush encouraged from 2002 to 2008 too. It didn't end well...

...not least because servicing what became known as "subprime" loans began to get more expensive as the Fed gently raised interest rates after slashing them near zero following the Tech Stock Crash. 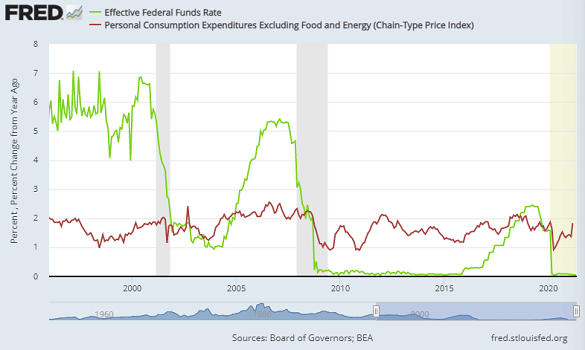 Kocherlakota's comment also accepts that...in setting interest rates...the central bank has the same big hammer no matter how small or fine the nails you ask it to whack.

And by keeping rates low for everyone, the Fed will create more boom times and maybe higher wages for everyone.

So like the green energy and post-Covid growth and fairer access to home loans debates taking place between government and central banks the world over, the political balance now tips very clearly towards DO NOT RAISE interest rates.

You'll note that inflation doesn't come into it. Not yet.

You will also note that, in our final chart of the recent past above, the US has sunk into recession (as marked by the vertical grey bars) every time that the Fed has raised its key interest rate above the pace of inflation.

So really, do you think interest rates are going up any time soon? Can you imagine rates rising anywhere near positive in real terms this side of never?

The world is crawling through its worst economic shock since total war 8 decades ago.

No one will dare "choke" the recovery, nor the fairer-caring-home-owning-green future now promised to voters.

If the stock market, crypto or commodities price bubbles are going to find the pin that makes them go bang, they will have to look beyond the usual suspects.