END_OF_DOCUMENT_TOKEN_TO_BE_REPLACED

"Cash beats shares!" says the BBC. "Gold beats 'em both – and then some," chips in BullionVault...

IMAGINE YOU'D STAYED inside a dark cupboard all through 1999. How smart would you look today?

Deprived of social contact as well as Vitamin D, you would have also avoided all those get-rich-quick yahoos pretending to be "Dot Com" insiders on lunchtime TV, down the pub, and in the red tops.

You cared nothing for Martha or Brent or how Boo.com was going to change forever the way people bought clothes by post that don't suit or fit them.

Come Millennium Eve, you crept out from under the stairs...but only to watch John Prescott on telly, gurning live from the Dome, all by yourself. And then, on Tuesday 4th Jan. 2000 – free from the tomfoolery that passed as red-hot stock market tips – you took all the money you'd saved and put it straight into a cash ISA.

Didn't you do well for yourself!

"Savers putting their money in funds investing in UK stocks and shares would have made more money since 2000 by putting it in savings accounts instead," says the BBC online.

The Beeb just asked Thomson-Reuters Lipper to run the numbers. The results made Auntie gasp.

Even before inflation and tax, in other words, that's barely 1% annual growth over eight years in shares. Hardly worth taking a punt on "risk capital", right? Whereas sat in the bank – but also before tax and inflation, which can feel like much the same thing when you're trying to save for the future – you would have made 35.8% instead.

Case closed! Equities suck, cash rocks. Except that cash has been pretty gruesome as well if you take inflation into account. 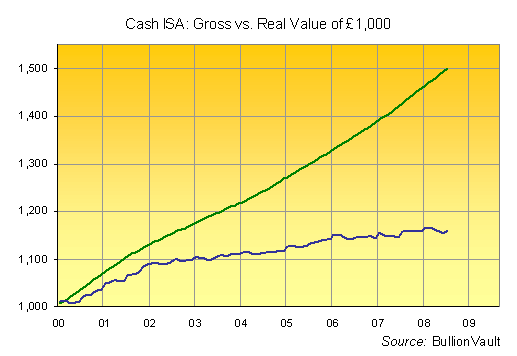 Fair and balanced as ever, of course – and right in line with its license-fee charter – the BBC naturally asked a couple of financial sales-staff for their thoughts.

Now you're so smart, if not rich, after that year in a cupboard, can you guess the investment industry's reaction...?

"It is a longer term question of when you are putting your money in and when you are taking money out," Jane Lowe, director of markets at the Investment Management Association (IMA), tells the Beeb.

She then points to that eternal stand-by of stock-market shills...the never-never land of "The Long Run". Because "over the long-term" apparently, "this form of investment was still a better bet than savings accounts." 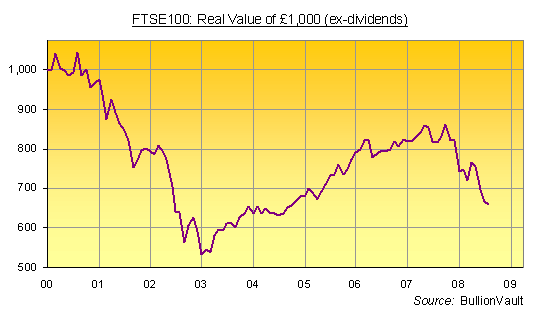 Hmmm...not quite. But here comes a professional money manager to set you straight. Get ready to phone your broker!

Why laughably? Because that little "insight" – as any cash saver knows – is either a lie or such an ignorant, dangerous guess that Claxton Smith deserves 10 years in a cupboard with no remission and no access to clients. 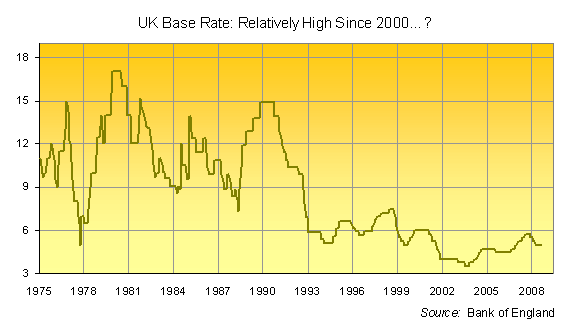 Compared with the previous two decades, in fact – the 1980s and '90s – gross interest paid on cash deposits has sunk by one half on average since the start of 2000. The Bank of England slashed the cost of Sterling to a half-century low in 2003. And as for the real return...allowing for the cost of living as well as Gordon Brown's take...the returns paid to savers has sunk in 2008 to minus 2.5% per year. 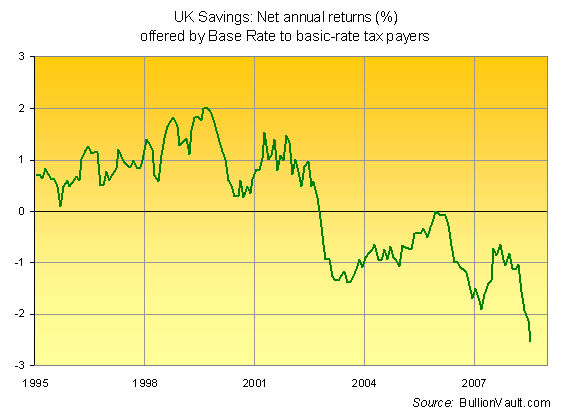 That's for basic-rate taxpayers, by the way. Higher-rate earners are now losing more than 3p in the pound every year by holding cash on deposit.

(Since the start of this decade, you might care to note, the return on their savings managed to stay in the black for barely 12 months. The net loss in real value equals well over 10% since the start of the decade for higher-rate earners...)

Luckily for profit-starved readers, the BBC knows there's something wrong with this picture. "If anyone made the unusual decision at the time of investing in a commodities or natural resources fund eight years ago," it chips in, "their £1,000 would now be worth £3,260."

Accessing the commodity markets remains tricky, of course. There are funds and trusts you can buy, but they often come with hefty commission fees – mostly due to the frantic trading they do in paper futures and options, rather than simply holding physical assets outright. And they certainly weren't sold to retail investors back at the start of this decade.

One long-overlooked asset was very much on offer, however. Gold began this decade at the very bottom of a 20-year downtrend. Since then it's outpaced the returns paid to cash more than three times over, turning £1,000 into £2,691 over the last 103 months. 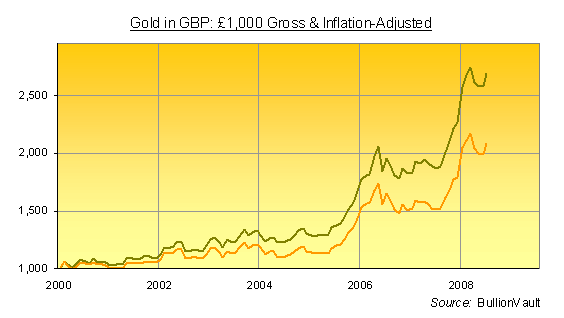 Even by making regular savings – a facility now open to even the most modest investors via the simple, low-cost BullionVault service – you would have made 45% gross on your money starting as recently as March 2005.

And now the Pound Sterling is under attack on all sides – from near-zero real interest rates as well as big government spending and currency traders selling it lower – British savers might do well to consider the outlook for Gold vs. cash and the stock market.