END_OF_DOCUMENT_TOKEN_TO_BE_REPLACED

How much more abuse can cash savers take before they flee into Gold Bullion...?

PRIVATE HOUSEHOLDS don't always act as economic models or policy-makers expect. And a good job, too. 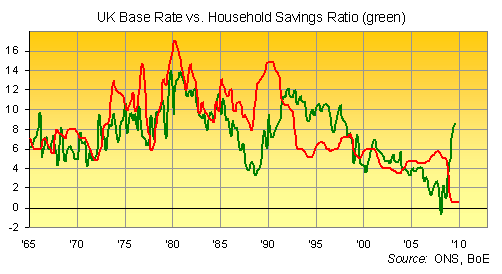 "The household saving rate is likely to rise," said Bank of England governor Mervyn King in May 2008 – "part of a rebalancing of the UK economy, away from spending and importing, towards saving and exporting..."

But not quite. Not with you slashing the base rate and thus dooming the Pound to a sharp decline, as BullionVault said at the time. 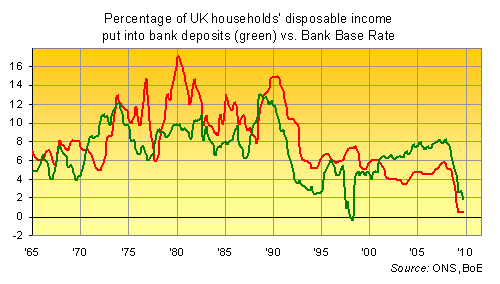 The green line above shows the quarterly change in UK households' bank-account holdings, measured as a percentage of their disposable income (i.e. take-home pay) over the same 3-month periods.

It represents, in short, the proportion of take-home pay kept as cash in the bank. Which is worth comparing with the "savings ratio" – that proportion of disposable income not spent on current consumption, and mapped in both the chart at the top and again here, this time in blue... 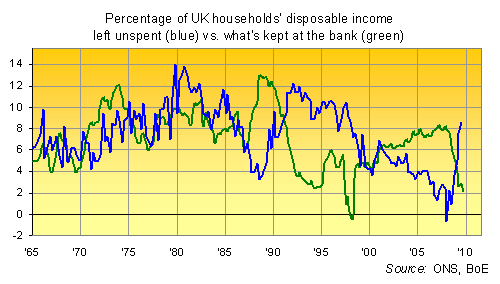 First, see how cash piled up – just as it did during the late 1980s – even as the household savings ratio sank during the go-go housing bubble of the mid-Noughties.

Between 1987 and 1990, cash accumulation averaged a huge 230% of unspent disposable income. Between 2006 and 2007 it averaged a massive 340%. Where did this cash bonus come from? The obvious source looks to be all that money sucked from the international money markets and lent against the future income of young UK home-buyers. It had to end up somewhere, most likely finding its way to the cash accounts of older savers and retirees – trading down, realizing their gains from bricks'n'mortar, and sitting on cash rather than re-investing elsewhere.

But second, see how the unspent portion of the UK's take-home pay leaps...while the volume of new cash savings sinks...when the economy tips from bubble to bust? Both at the start of the '90s, and again since Northern Rock collapsed 29 months ago, the rate of cash saving falls even while spending collapses.

What gives? Most likely, the gap between unspent income and cash-saved income shows people paying down debt. But since, during the booms, it's the wealthier households who held the whip hand – hoovering up the cash borrowed by other households to buy a home – how they choose to hold their savings will also prove significant. Especially if, driven nuts by negative real interest rates worse than at any time since the late '70s, they begin to disdain cash entirely... 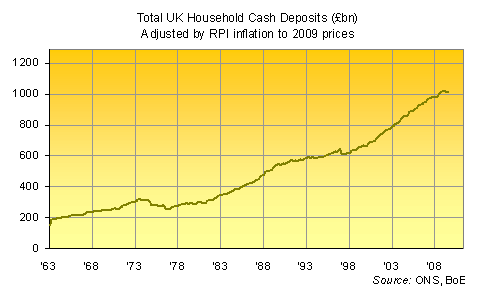 Of course, since US households are pretty much the wealthiest households on earth, it makes sense to ask – when trying to second-guess whether, say, gold or bonds make a better bet in 2010 (i.e. do we get inflation or deflation) – where they might choose to put their money in the near future, too.

And one place that US household are not keeping their income right now is cash. 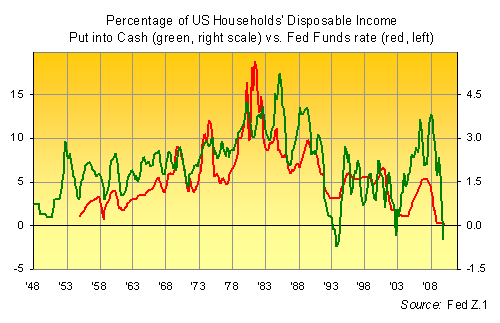 Contrast with the UK patterns, and you can see that US households aren't big fans of cash (and the other near-cash instruments included above) anyway. But you really can't blame them today.

"High real interest rates discourage speculation," as Marc Faber reminded the Financial Times last month. Whereas low real interest rates after inflation...such as the UK and US now both endure, courtesy of near-zero nominal rates from the Bank of England and Federal Reserve...do the opposite.

"Look, let's say I give you a million US dollars," the Asia-based, party-loving, doom-n-gloomin' advisor advised. "You don't get any interest on your deposit at the present time. So by holding interest rates at zero I essentially force you to speculate – I force you to go and buy some real estate, or go and buy some stocks, or trade currencies or what not..."

Speculating in real estate, stocks, currencies...even Gold Bullion...might look the preferred outcome for Federal Reserve and Bank of England officials. How else to stem the deflation in asset prices that threatened the end of the world as we knew it barely 12 months ago?

But "the whole problem is that artificially low interest rates lead to a complete misallocation of capital, they lead to credit bubbles..." as Faber went on. And if (or when) the negative returns paid by zero-rate policy suddenly tip households over the edge, flipping them from mere speculation to fleeing cash entirely, a flood of money will suddenly start chasing consumer goods – as well as housing, stocks and precious metals.