END_OF_DOCUMENT_TOKEN_TO_BE_REPLACED

Here's what Japan shows about Buying Gold in a zero-rate world...

BUYING GOLD should make financial crises fun, writes Adrian Ash at BullionVault. Which alongside silver, it has surely done to date, a handful of 20% and 50% plunges aside.

But if you've been Buying Gold since 2007 – or you're now ready to start – do spare a thought for everyone else. Because pointing and laughing at others' misfortune can be an ugly habit. It only makes us "gold bugs" more boring to meet at parties as well, as Christmas 2011 proved yet again. A little sympathy, and a stab at empathy too, might go a long way to social redemption. And it would surely be better than pride preceding a pratfall.

Crowing about being so very right is forgivable, though. Hitting a 22-year low in July 1999, the price of Buying Gold has since risen sharply year-on-year against the Dollar, Euro, Yen and Sterling, as well as every other currency you can name. Silver bullion has done better still over the last 10 years, that decade straddling both the Tech Stock Crash and its screeching offspring, the Cheap-Money Bubble, sired by meek academics wielding godlike powers at the big central banks.

The permanent emergency following that inevitable blow-up has only increased the outperformance of gold against the fund-management industry, too.

In most cases, this acceleration of dumb bullion's Schadenfreude has come thanks to its own faster gains, plus the flagging performance of the world's finest investment minds.

But not in Japan. There, in the land of the zero interest rate, retained savings have grown so used to earning nothing – nothing! – in return for credit or capital risk, that even gold and silver slowed their rate of gain during the first half-decade of today's permanent emergency. 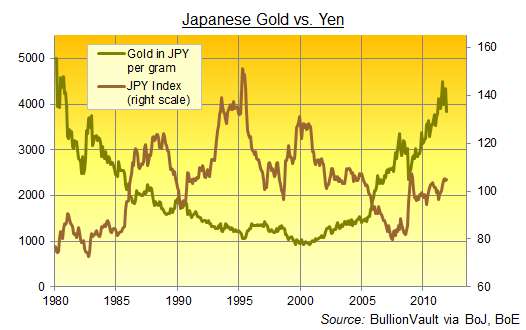 Japanese savers Buying Gold at the start of 2007 have since gained just 8.8% per year (compound annual growth rate, after costs). That's down from a 15% annual gain over the 5 years before, and compares with 20% for Euro and Dollar investors. Silver slowed more dramatically still vs. the Yen, cutting the pace of its annual gains by more than two-thirds to just 6.1% per year. And all because, of course, the Yen has rallied sharply during the global financial crisis so far.

Remember, Japan was long into depression when this global crisis began. Its own on-shore bubble exploded in 1989, dragging GDP, wages and even shop prices into deflation since then. Japan thus got the absurdity of zero interest rates almost a decade ahead of everyone else, helping knock the all-too-powerful Yen down on the currency market in 2000-2008 (see chart above) but still failing to reflate Tokyo's bubble economy.

Come the big bang of late 2008, and the Yen reversed a huge chunk of its fall, as hedge funds (and others) suckered into selling it short by the Bank of Japan's zero-rate gambit realized that every other central bank was about to try the same gag. Gold plunged in Yen terms, and silver fell harder again, but net-net since the global crisis kicked off in 2007, both metals have still offered the best store of value (barring just two mutual funds) to Japan's household investors. It's simply that they've both slowed their rate of return to what, compared to the 20% annual gains for Dollar, Sterling or Euro investors, looks like a crawl.

Depressed returns in a depression are to be expected, of course. But gold and silver already pay nothing in interest, putting them well ahead of the game as US and European yields set like concrete at zero. Gold and silver are further unique, however, in being entirely free from counterparty, credit and rent-seeking risk. That's made them stand-out stores of value in depression-weary Japan, just as much as in the US and Europe.

Only difference, since 2007, is that precious metals have had worse-still rates of return on all other assets to beat. So if gold remains the best home for your savings, and this depression wears on, don't rely on making 20% year-on-year gains.