END_OF_DOCUMENT_TOKEN_TO_BE_REPLACED

Snip, snip! The Trimmer's at it again, destroying the British Pound with negative real interest rates...

"ON THE DOWNSIDE," said the Bank of England when it snipped another 0.25% off UK interest rates last week, "the disruption in financial markets could lead to a slowdown in the economy sufficiently sharp to pull inflation below target."

Note the Old Lady's choice of diction; the banking crisis "could lead" to lower inflation.

Note also her logic – that an economic slowdown can do all her work for her. She is 314 years old, after all, poor love; defending the value of Sterling for more than three centuries (the real meaning of her "inflation targeting" mandate from government) would wear out the toughest old boot.

And with the British Pound now worth less than half on the High Street what it bought twenty years ago, the Bank will need all the help it can get in pulling inflation back below target. 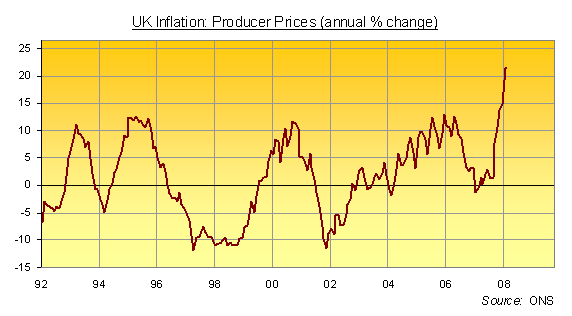 Just like the United States, the UK is now suffering the worst inflation in industrial costs since the runaway inflation of the late 1970s.

Only this week, the UK's official data agency has pointed to input prices rising 20.4% for manufacturers from this time last year – a new historical record. The Bureau for Labor Studies in the United States, meantime, says US import costs rose 14.8% in March, up from 9.1% six months before.

Now a professional economist (or government wonk) might counter that both countries are dependent on imports for much of their industrial input, including crude oil. They are both also suffering on the currency markets right now. The Pound and the Dollar have been hammered vs. the Euro and Yen, not to mention the Chinese Yuan.

So you'd expect industrial costs to be rising. But that would only be to say just the same thing, because the value of money – at root – is precisely the inverse of your rate of inflation. Currency traders are only adding to this pressure on the Anglo-Saxon economies today; they don't create it.

Now let's recall the Old Lady's final decision for April: to cut UK interest rates, albeit by a slim 0.25%, in the hope of forestalling the very same slowdown she hopes will ease the UK's inflationary pressures.

Okay, so Mervyn King and his interest-rate trimmers are less melodramatic than Ben Bernanke's Greek chorus in Washington. But can they really have it both ways? Just what do they want – a slowdown or not? 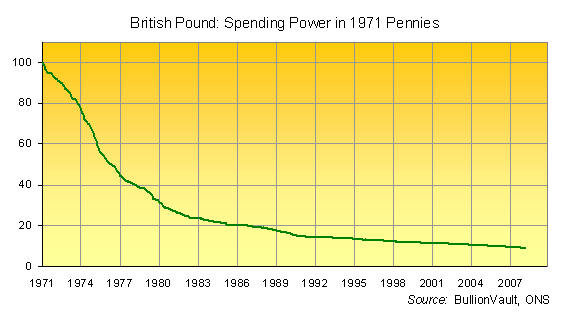 Snipping and trimming at the value of Sterling, we fear here at BullionVault, will still the UK with a slowdown regardless – plus persistent inflation – taking us straight back to the stagflationary horror of the 1970s.

Yet so far, at least, British savers and spenders still seem happy enough!

"We will have to lower our expectations of what property we can afford," grin a young couple splashed across the front page of Friday's Times. The credit crunch starting last summer has kept them and their baby locked out of the UK's decade-long property boom. Merely tinkering with the cost of money looks unlikely to change that. Four major mortgage lenders actually raised their fixed-interest deals on the Old Lady's decision.

"It's not just the cost of hotels, it's the weak Pound," adds a young father, also snapped for The Times. Already planning his family's summer vacation in Europe, he's spotted the link between a currency's value and power. Yet he too smiles like inflation's not really a worry.

"My household bills are creeping up every day," agrees a young medical doctor with another soft smile, seemingly happy with the snail's pace of Sterling's destruction. Perhaps the average GP's pay-rise of 58% since 2004 helps raise his spirits, up there at £113,164 per year ($221,800).

So it's left to two pensioners, Frank and Dorothy Beevers of Bexley, London, to bring true gloom to The Times' doom-laden headline – "Consumer Crunch".

"Inflation is having a real effect," they add. And for them of course, aged over 65, inflation always has had a real effect: the effect of destroying their savings. Since the decimalization of Sterling nearly four decades ago, in fact – back when the United Kingdom got rid of its boring old Pound and its boring old 240 pennies – the Pound has literally been decimated.

It now buys barely 9% of what the brave new Pound first bought back in 1971. And despite losing half its value in the last 20 years alone, the fastest destruction of Sterling's spending power came in the first nine years. By 1980, the new Decimal Pound had lost three-quarters of its purchasing power, which vanished at an average clip of 12% annually.

Now throw in that decade's disastrously high tax rates – up to 83p in the Pound for the highest rate earners – and cash-in-the-bank just couldn't keep pace, despite the record-high interest rates of the mid-to-late '70s.

In 1976 alone, even basic-rate taxpayers gave away one-sixth of their savings to tax and inflation if they dared save for the future by putting cash on deposit. Yet incredibly, that's just what most people did... 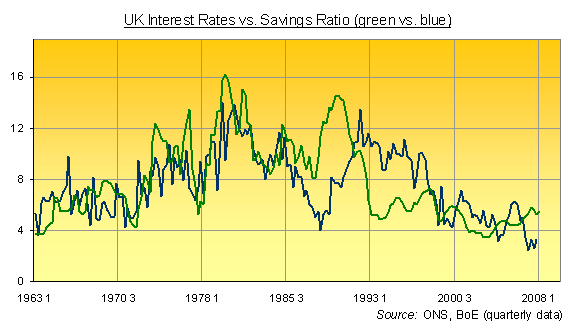 The cost of borrowing soared as the cost of living shot higher during the 1970s.

Encouraged by these seemingly great rates of return, British households piled their cash into savings accounts. And as you can see, the ratio of savings to disposable income mapped the gross returns paid to cash pretty much tick-by-tick.

But what nobody told them – and what headline interest rates still keep hidden from view – was the true cost of saving £1 today to provide for the future.

One hundred New Pence kept in the bank during Jan. 1975 bought less than 63p worth of goods at '75 prices by the start of the next decade. That loss of more than one-third came despite headline interest rates averaging nearly 11%.

So yes, things were very much worse three decades ago. But there's scant hope the Bank of England will avoid a repeat if it keeps snipping at base rates with its patented "baby step" cuts today. 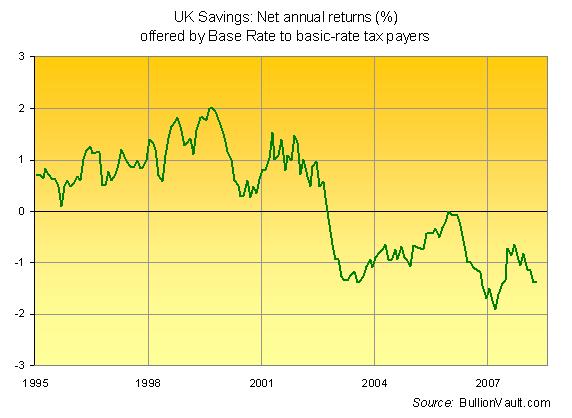 With the Old Lady now running interest-rate policy in line with both bond-market forecasts and the government's public instructions, the net loss to cash savers only looks set to grow worse.

"If you look at [the financial crisis] situation," said Gordon Brown, the prime minister, ahead of the BoE's vote, "because we've got low inflation we can cut interest rates."

Not quite a lie, perhaps, but certainly a misinformed "mis-speak" as Hillary Clinton might say. And either way, cash savers in Britain – as in the United States – will soon start to wonder:

Just what's the point of prudence if the value of money is being destroyed by below-zero real interest rates?

That, of course, is the No.1 aim of monetary policy on both sides of the Atlantic today. The dreaded and rarely seen "deflation" in money – literally the opposite of inflation, meaning a shrinking money supply that takes High Street prices down with it – cannot be allowed to take root. Forcing cash-savers to stop saving offers a clear path to inflation instead.

It leaves you, as a saver, at risk of a real loss of wealth. And in such periods of political meddling with money, investors the world over have repeatedly begun to Buy Physical Gold Bullion, choosing a fixed-supply asset proven to store value for 5,000 years as a way of defending their savings.

You can find out why Gold Rises When Real Interest Rates Fall in this special Gold Report here...