END_OF_DOCUMENT_TOKEN_TO_BE_REPLACED

Or so everone says, ignoring Germany, commodities, Sterling and inflation itself...
BREXIT speech from Theresa May aside, currency traders also got new UK inflation data on Tuesday, writes Adrian Ash at BullionVault.
They seem to think it all means Sterling should rise from this week's new 3-decade lows versus the Dollar.
Perhaps that's because, as everyone from Bloomberg to the BBC claims, traders think May's promise to let Parliament vote on the final Brexit deal means that quitting the European Union and its single market won't prove a catastrophe.
Or maybe they suddenly think Brexit is going to be great...just beautiful...for the Pound, thanks to May's promise to bake, take and graze on as much cake as we like.
Or maybe FX traders imagine Bank of England interest rates are going up.
Y'know, to head off that upturn in the cost of living...
...an upturn solely due to last summer's shock Brexit referendum result, according to that half of the media and pundocracy now classed as Bremoaners by the other 51.9%. 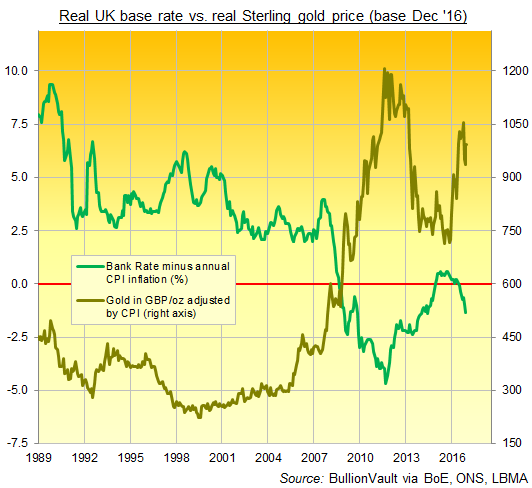 Never mind that Germany's consumer-price index rose 1.7% in December from a year before, faster than the UK's, the fastest pace in 3 years, and the sharpest month-over-month rise on record for the Eurozone's No.1 economy.
Never mind 2016's global rise in commodity prices either, nor last year's 15% plunge in Sterling's global trade-weighted exchange value, almost 10 times the apparently concomitant rise in inflation.
No, it really is thanks only to Sterling's plunge, and therefore to the Brexit vote as the BBC puts it, that December 2016 showed the fastest year-on-year rise in the UK's Consumer Price Index since June 2014.
Maybe we should thank Brexit for the fastest wage growth since autumn 2015 too? Rising at 2.8% per year, however, average earnings have now outstripped the rising cost of living for 27 months running on the Office for National Statistics' data. Last June's referendum result didn't start that.
Besides, CPI inflation at 1.6% per year is still running below the Bank of England's official 2.0% target.
Inflation also stands only a little above its 5-year average, and it comes markedly below its longer-term average of 2.6% since comparative records began in 1989.
So alarm bells are not ringing on Threadneedle Street, whatever Governor Mark Carney may have said this week. Especially not with the Bank's CPI target remaining a symmetrical target – meaning it can overshoot as often as it undershoots. Especially as this pop higher still extends a very long run of undershoot.
And especially not with the Bank stuffed full of Bremoaner-types...to quote the brave Brexiteer press...now spooked into keeping rates low to try and keep the lights on as the UK stumbles blinking and blinded into its bright ex-EU future.
Even at this modest pace meantime – as savers know all too well – official inflation still runs well ahead of bank deposit rates. It came almost 1.4% ahead of the Bank of England's key interest rate last month, the widest gap since January 2014.
Adjusted for annual inflation, real UK interest rates bottomed at -4.7% per year in late-summer 2011.
So the Bank of England might let this run much further yet. Especially as Brexit hardens into reality.
Economic cause-and-effect is complex, and way more complicated than Bremoaners or those delightful Faragists would claim. But the impact on savers in contrast looks all-too plain, whatever your politics.
Anyone looking to defend a little of their money from this risk might like to note the relatively simple relationship between real interest rates and the real value of gold bullion, as shown on our chart above. 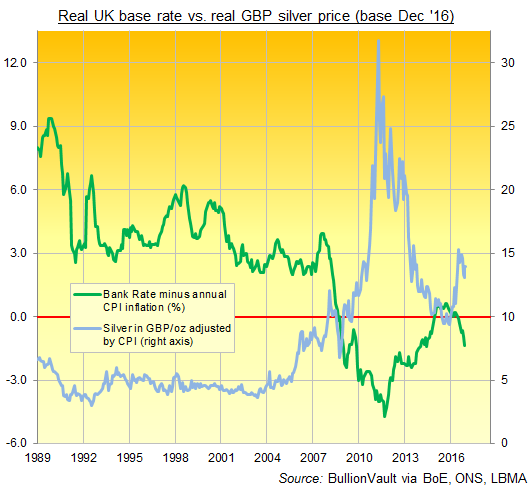 More active traders might want to speculate how silver prices could respond versus the Pound if UK interest rates lag further behind a rising rate of inflation.