END_OF_DOCUMENT_TOKEN_TO_BE_REPLACED

Where to park your Mercedes without getting it scratched or dented...?

"ONCE PEOPLE decide that German and US bonds are not such a great store of value," said one BullionVault user I spoke to last week, "the rush to find parking spots in a very small car-park will be on."

Pending a rush to Buy Gold or silver however, writes Adrian Ash, that same fight for parking spots continues inside the government bond market. French, Dutch, Austrian and Finnish government debt just got annexed as the latest scrap of waste-ground for global capital to park its Mercedes.

"There's a rotation out of the safest assets into the next best," says Eric Wand, fixed-income strategist at the Lloyds Banking Group. "Treasuries yields have been distorted to levels not consistent with its economic data," says Marc Ostwald at Monument Securities, also here in London and also speaking to Bloomberg.

On fixed-income bonds, yield moves inverse to price, and yields on French 10-year debt have sunk to a fresh record low of 2.35% per year. Maybe investors think new Socialist president Francoise Hollande – already busy raising the minimum wage and imposing a maximum salary for national industry chiefs of 20 times their lowest wage-earner's pay – is a safe bet for the return of, let alone on capital.

More likely they're desperate, buying Paris's promises because they're already max'ed out on Berlin's, and Washington's, and even London's. Yes, long term, it is hard to imagine a bigger "sell" than 10-year UK gilts yielding 1.57%. That rate of interest is barely half the current rate of annual inflation, and it's only one-third the average yield paid by Britannia since 1750.

But fact is, supply is too tight for demand, despite the peace-time record debt mountains built across the rich West and Japan. Money managers and corporate treasurers daren't leave cash in the bank; the bank might implode. They daren't buy equities with both hands; look what the Euro-crisis is doing to stocks. Business investment would require faith in the business environment. Commodities are no longer the brainless "no brainer" of the early 21st century, for who can say what is really happening to China's demand growth?

Instead of money, risk or stuff, retained savings worldwide are choosing government debt – hefty, near-cash debt which is in truth an obligation of the "safe haven" sovereigns. Those safe havens already face record peace-time obligations. But a call on the taxpayer is better than a call on banking, growth or production right now. At least you know the poor taxpayer will still be there 12 months from now!

And so strong is demand that it now plainly outstrips supply. The mismatch is creating absurd anomalies like the zero-yield offered last week on Germany's latest 2-year Schatz bonds, and the 1.57% yield on 10-year US Treasury bonds. 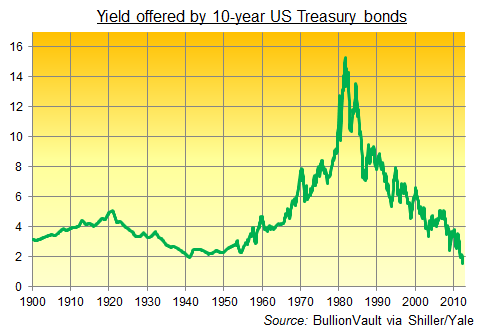 "Each time the US government creates another Treasury bond it adds value to the world economy."

Put another way, "The shift of debt away from over-indebted households to a federal government that is not borrowing-constrained is a big plus; it's setting the stage for recovery," reckons Paul Krugman of Princeton, the Nobel prize and New York Times.

Plenty of people gasp at such ideas...that government debt adds value to the world economy, or that piling new debt on debt can possibly speed the recovery. But those people have either chosen to Buy Gold – and now have to take their chops like everyone else, watching the metal fall despite what seems yet another perfect storm, and after being proven all too right for the past decade and more, too. Or they can sell US Treasury bonds short in the market, putting their money where their mouth is.

You're stepping in front of juggernaut if you dare to go short, however. Because retained savings the world over – terrified by the apparent "free market" crisis starting 5 years ago – continue fleeing into the warm, welcoming arms of the State's obligations. For now.

Let's see what happens if...or more likely when...the State scratches its own car-keys down the side of all those shiny new Merc's.