END_OF_DOCUMENT_TOKEN_TO_BE_REPLACED

"If somehow we escape bankruptcy, we shall have set up an oppressive slavery..."

YOU DON'T NEED to read The Daily Telegraph to be told Britain's going bankrupt. Such forecasts have long been with us.

"By our political folly we have a put a large part, probably the greater part, of the nation in possession of rights to draw from the public purse," wrote Ernest J.P.Benn in his hilarious Account Rendered of 1930.

Hilarious how? Forced to live with the "smudge readers" at passport control, policemen demanding to see one's driving license, and Whitehall drones obsessed with how many pencil sharpeners their department controlled, Britain's moneyed classes knew the lower orders could only travel, drive and wear white-collared shirts if kill-joy regulations applied to the gentry and their staff alike.

But modern liberty, with its motor cars and mortgages, offered to keep Bolshevism out of Britain. Along with homes "fit for heroes" and the basic state pension, regulating it all added massively to the government's annual expenditure too – equal at the start of the Thirties to barely one-quarter of the economy.

That was already too great for the Pound Sterling to bear... 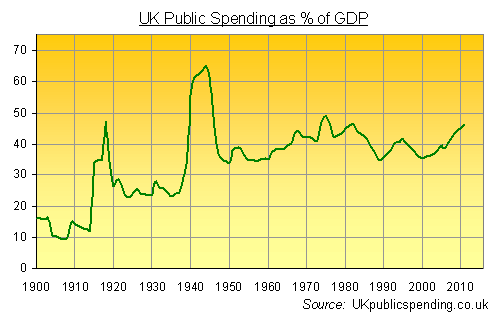 "Whether those [state-funded] rights take the form of relief, dole, pension, official salary, subsidy or interest on public debt, they all constitute heavy claims on our total production," wrote Benn.

"If happily, we manage to escape national bankruptcy, we have set up a slavery for the minority, the producers, far more oppressive than any previous form of bondage..."

Roll on 35 years, and even with Ernest's young socialist nephew – Anthony Wedgwood – grandstanding against reducing expenses, Britain just about avoided bankruptcy once more. Yet again, however, the other option – of defaulting in fact, if not in name – was too good to resist. 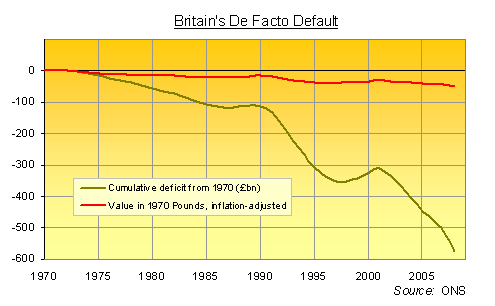 Just as the state defaulted in 1931, quitting the Gold Standard and offering to pay only more paper in return for Pounds, so the UK has long serviced and repaid its debts in devalued notes.

Prior to abandoning the Gold Standard eight decades ago, only Charles II had reneged on his debts, ordering a "stop of the Exchequer" in 1672 that halted payment of interest on any debt without a specific tax revenue ear-marked to cover it. Whereas across the Channel, in contrast, the French monarchy defaulted in part or in total four times in the 17th century, and then again in 1714, 1721, 1759, 1770 and finally in 1788 – one year before the Revolution.

By 1797, the new government also found itself unable to service or settle its debt, writing off two-thirds of the entire national debt. Hence the higher rates of interest paid on French debt, reckoned by Niall Ferguson to be "of the order of one or two percentage points" between 1745 and 1780, and wilder still – according to his charts at least – during and immediately after Madame Guillotine set about the rentiers.

"These differentials were based on past experience of which bonds were most likely to be defaulted upon," writes the Oxford (now Harvard) scholar in The Cash Nexus (2001). Higher interest rates were a form of "prepaid repudiation" as another historian has called it. And short of a deep and long-lived deflation in prices, that pre-payment is entirely absent today. 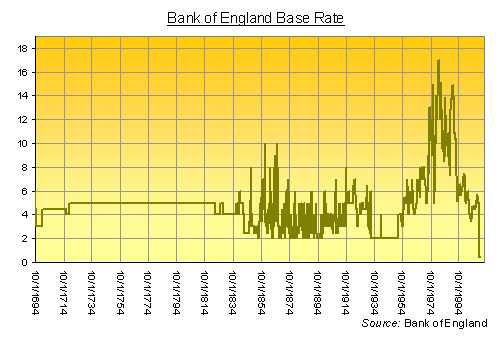 "Plenty of commentators see the risks that arise from not getting a handle on excessive spending...not getting control of the deficit," says Philip Hammond, Conservative spokesman on Treasury matters.

Given what the 2010 election might mean for the Pound – or rather, what the market might take it to mean – it's worth heeding just what Hammond told Bloomberg this week.

"We believe that what's got Britain through the recession so far has been the activist monetary policy of the Bank of England – keeping interest rates low, supporting the economy through quantitative easing – and we think it is essential that in the recovery we are able to continue to keep monetary policy relatively loose.

"We will only be able to do that if we have got the deficit under control, and sent a clear signal to the markets that we intend to execute a plan, and in order to do that we need to get started.

"Nobody's talking about slashing [public spending] in 2010, but we need to make a start. The [Labour] government's planning a £30 billion increase...We think that's too much. We would scale that back."

As we've long suspected here at BullionVault, in short, David Cameron's "New Tories" can grasp the financial case for reduced public spending. But so could my five-year old...and my cat, come to that. And unlike the last Conservative party to wrest the public finances away from an economically illiterate Labour government, the British Tories daren't make or even conceive the ideological case for reducing the state's expense today, let alone its size and reach.

A return to Thatcher? We should be so lucky. Even her reading of Hayek saw actual spending rise, not fall, throughout the 1980s, while high interest rates and an apparent zeal for prudence wrung inflation out of the system. Now, after 10 years of Gold Prices rising on the back of surging government deficits, record-low interest rates, and an avowed policy of currency devaluation, gilt-owners might want to consider the current size of Britain's debt, and the zero-rate policy its likely government wants to retain.