END_OF_DOCUMENT_TOKEN_TO_BE_REPLACED

Cash, trash and treasure have switched purpose as the credit bubble turns to bust...

The ODDEST THING thing about today's Great Depression? asks Adrian Ash at BullionVault. The lack of a collapse in the art market.

Previously a bellwether for the global economy, turnover in fine art sank by three-fifths in the early '90s. It tanked again in the early Noughts, taking the revenues (and equity valuations) of the big auction houses down with it.

Yes, the stock price of Sotheby's – one-half the global auctions duopoly with unlisted Christie's – sank as today's depression began with the credit crunch 5 years ago this summer. But see what zero rates, quantitative easing and the unflustered money of plutocrats worldwide then did to BID? 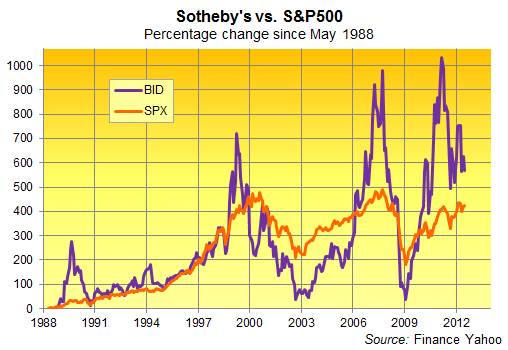 Buying at the low of March 2009, you could have made 8 times your money in barely two years. And even now, with Sotheby's stock trailing spring 2011's peak by 43% on the Nasdaq, treasure-hunting by the super rich is still setting fresh records worldwide.

Christie's this week reported art sales up 13% in Jan-Jun from the first half of last year, hitting a record $3.2bn. "Massive storage units are increasingly in demand by the booming art market," says one Swiss newspaper, "offering a duty and tax-free place to store art and make sales easier." And a new book pumping "hard asset" investments in SWAG – adding silver, wine and gold to art to make a PR-friendly handle – is now on the summer reading list of SocGen's much followed strategist Dylan Grice. Which means it will soon sit unread on the beach with lots of me-too City and Wall Street types, too.

Now, whereas the bull run in art, wine and other high-end baubles was all just more conspicuous consumption in the credit bubble up to 2007, it has since become an investment necessity. "Treasure comes in many forms including fine art, rare property and, of course, gold," writes QB Asset Management's Paul Brodsky in his latest letter to clients. "Treasure does not need to have any functional utility. The all-important common characteristics of treasure are scarcity and ongoing demand."

But why buy treasure – be it gold, pastel daubs by Edvard Munch, "signed first edition Edith Wharton books, original Chippendale chests, Honus Wagner baseball cards, and Wyatt Earp pistols," as Brodsky suggests, or silver, wine, art, gold, stamps, prime London property, beachfront in Monaco, or Spongebob coins from bankrupt broker PFG as most anyone else with a publishing advance will tell you today...?

"It is simply, quite simply really, a sanctuary for purchasing power during a period of currency dilution," says Brodsky. "The more currency in existence, the more currency chases scarce items."

Hence the blockage for today's great depression in art and treasure. Because unlike in past recessions, cash is still all-too abundant. Too much money is the problem, not too little. Provided you've already got it. And with America's top 1% now holding one-third of the wealth, for instance, some folk have got it in spades.

Hence safe-haven bonds paying nothing. Or less than nothing in the case of German Bunds. The yield offered in the open market by everything up to and including Berlin's 3-year debt now shows a minus sign at the start. You have to pay Mrs Merkel to lend her money. Because there's so much money sloshing about, the return paid to safe-haven loans has gone into reverse. Retained savings have to sit somewhere, and while the vast bulk is squeezing into US, German, UK and now even French bonds, a smaller but growing chunk wants to hedge the risks inherent in all debt investments (default and/or inflation) by buying tangible, high-value stuff.

Hence the continued boom in London property prices, even as the rest of the UK endures a near-bear market of 20% falls. Hence the adverts for stamps, fine wine and all manner of other collectible trash now following you around the internet. Hence last week's new all-time record high for the weight of gold held for ETF investors worldwide, and Thursday's 18-month record for silver ETF holdings.

Here at BullionVault, private savers refusing to leave their entire wealth at the mercy of banking, corporate or government debtors are also adding to their physical gold and silver property. Regardless of price, owning precious metals outright remains the stand-out choice, we believe, for your savings. Because they trade in deep, liquid, instantly priced markets worldwide. And because unlike corked wine, forged stamps or remaindered books sent to pulp, gold and silver have always retained a deal price, persistently throughout history. They never deliver an absolute loss. Which we fear is what cash savers and bond investors are certain to enjoy – retirement savers as much as the global über-wealthy – before this depression can really get started.

Inflation is clearly a risk, as Brodsky and the rest point out. But mass default by the world's debtors looks just as ugly and clear a risk to us today.

Get the safest gold and silver at the lowest costs using world #1 online, BullionVault...