END_OF_DOCUMENT_TOKEN_TO_BE_REPLACED

"Scarcity" comes his own answer.

Pretty much the rest of the world agrees.

"Resources are scarce," says a school textbook, repeating itself from a decade ago, 4 decades ago, forever, "but human wants are unlimited."

So stop nagging me, kids! You cannot have everything you want. There simply isn't enough time, stuff or energy.

...the root of all economic decisions and actions both today and in history...

How to allocate scarce resources in the face of unlimited wants? 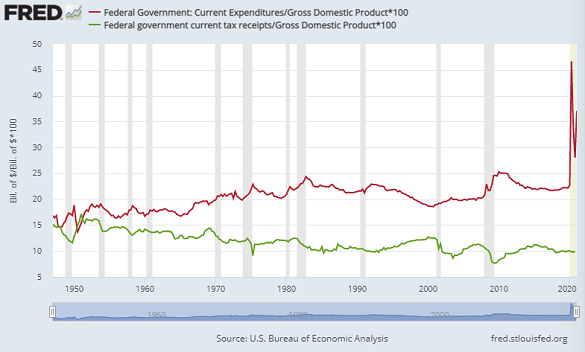 "You're raising the Government's size in GDP, no?" a journalist last week asked new US Treasury Secretary Janet Yellen.

Our chart shows US federal spending in red as a percentage of the entire economy's gross domestic product. The lower (and flat) line in green shows Washington's income from tax.

Now Yellen's boss is spending $1.9 trillion on Covid relief and stimulus, plus another $2 trillion on new infrastructure plans...

...with another $2 trillion now wanted for a further host of schemes, projects and gifts if the Biden White House can get his plans through the Congress and Senate.

All this comes on top of the extra government spending already driven by bigger jobless and welfare benefits caused by the Covid catastrophe.

Where will the money come from?

"It does involve a re-allocation of resources," replied Yellen, a former US central-bank chief, "towards these kinds of programs and away from other things."

Tax receipts look particularly limited, as the green line shows above. That leaves bond-market debt to make up the shortfall with spending in red.

How to attract investors' money?

"You know," Yellen said, "it may be that interest rates have to rise somewhat."

Cue a $30 plunge in gold when Yellen's comments were posted on YouTube on Tuesday.

Cue a $30 rebound as she then tried to clarify those comments later the same day.

Why? Gold pays you nothing remember. But as the ultimate 'hard currency' it cannot go bust or be created at will.

That makes the rate of interest offered by cash or bonds very important to the direction of gold prices. The metal has only become more sensitive to any potential move as the returns paid to cash have spent longer at zero following the global financial crash.

Most notably, what matters to gold...and by extension to its formerly monetary sister silver as well...is the real rate of interest, once you account for inflation.

Here again, expectations are having an ever bigger impact. Because the more time we spend with headline rates stuck down here at zero, the more we all have to rely on hearsay and guesswork for a direction.

So it's the real rate as predicted by bond-market traders which now counts the most, something which regular readers of these Updates and GoldNews well know with a yawn.

Here is the economic problem in action. 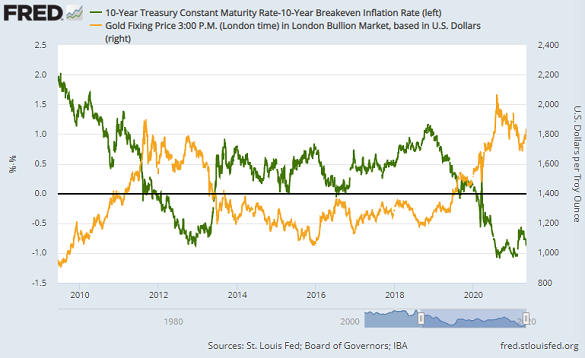 I have only limited savings.

Sad but true, as I keep telling my kids.

So in trying to grow that small pot, I must choose which assets to buy and hold.

And if I select gold or silver, then I cannot also choose cash or bonds. Not with the same chunk of money.

Scarcity, you see. With a profit-seeking edge.

Hence the relationship between non-yielding gold and interest-bearing bonds or cash. Other investors, like me, must make or review their choices each day.

Everyone acts from their own selfish self-interest, and everyone thinks (or hopes) they are acting rationally. Indeed, we each ration our savings to the investments we choose, trying to give each asset the fair share it warrants.

But there is another way of looking at this. Start by throwing out what mainstream economics says is the problem.

"i will begin with a basic fact," said French author, historian, philosopher, occultist, librarian and pornographer George Bataille in his 1949 work, The Accursed Share.

For a "basic fact" it takes some grasping.

"The living organism, in a situation determined by the play of energy on the surface of the globe, ordinarily receives more energy than is necessary for maintaining life.

"The excess energy (wealth) can be used for the growth of a system...[but] if the system can no longer grow, or if the excess cannot be completely absorbed in its growth, it must necessarily be lost without profit.

"It must be spent, willingly or not, gloriously or catastrophically."

Bataille continues in this vein...

...that mix of insight, arrogance, vagueness and often pure gibberish which French philosophers of the mid-to-late-20th Century made truly their own.

But his key point demands attention, not least as our rational view of how money and the world works keeps getting roughed-up by reality.

Instead of scarcity, Bataille said, the economic problem is the surplus.

What to do with the excess? Even individual households might think he was onto something right now.

Personal savings across the developed West have leapt, making arguments over inequality and the 'left behind' feel very academic to many families.

Even the British have, net-net...and outside their booming mortgage debts of course...been paying down their loans rather than growing them since the Covid Catastrophe hit.

Americans have meantime gone from saving barely 7% of their disposable income pre-Covid to hoarding nearly 3 times as much since New Year 2020. 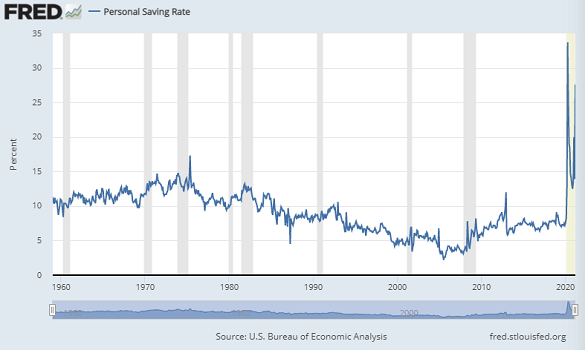 Looking at history, Bataille found this excess share of human output being spent on grand, unproductive social works such as pyramids, cathedrals and ceremonies (not least animal or human sacrifice) plus the making and gifting of useless luxuries.

Think of the Muisca tribe in what is now Colombia...

...only to toss them (along with their King perhaps!) into the middle of Late Guatavita as an offering to their gods.

Economics says this looks insane. But it's only a little crazier or more profitless than the repeated Spanish and then British expeditions into the jungle over the last 400 years to try draining the whole lake in search of the gold.

...going into wanton destruction, most clearly war (but again also sacrifice, something of an obsession).

And while Bataille was aiming to unearth some eternal and universal truth after the horrors of the First and then Second World Wars, he was of course a product of his own times, place and pose. Hence his very ugly defense of Stalinist Russia's mass slaughter and starvation (French intellectuals defended many other terrible things around the same time). Hence his Marxist view of history's big sweep. Hence this nice comment on the late-1940s' new No.1 superpower:

"The industrial development of the entire world demands of Americans that they lucidly grasp the necessity, for an economy such as theirs, of having a margin of profitless operations."

Rational, profit-driven, relentless America was a real bugbear for Bataille. (He quoted Ben Franklin to dismiss him: "Remember that time is money...He that murders a Crown [by wasteful spending] destroys all that it might have produced, even scores of Pounds.")

But maybe "profitless operations" are what, over half-a-century later, Biden and Yellen's big spending will in fact achieve.

Sure, lots of the spending is aimed at new 'green' tech and energy, rather than existing systems which can no longer grow (to quote Bataille). But what if the growth of these new projects can't absorb all the money thrown at it? Won't cost-price inflation necessarily waste some of this "investment" without profit?

Academic economists have been fretting about the "global savings glut" since before the financial crisis. (Most famous was Ben Bernanke, Yellen's predecessor as Federal Reserve chief.) Now that glut has gone super-sized, it's going take a much bigger bonfire to waste it.

Is this also what today's asset-price bubbles already offer...

...not least with so much cash flowing into stocks and crypto from the huge stimulus checks borrowed by Washington and sent to pretty much each and every US adult...

...a profitless sacrifice of excessive wealth...?

If so, here's hoping your share gets a reprieve. Or indeed your shares, bonds, crypto and cash.

"Willingly or not, gloriously or catastrophically," the accursed portion must be spent.