END_OF_DOCUMENT_TOKEN_TO_BE_REPLACED

EVEN AFTER collecting their dividend checks, US stock investors earned less than zero thanks to inflation in the 10 years to July 2008.

That marked the first Decade of No Returns in a quarter-century according to Richard Bernstein at Merrill Lynch. And seeing what's happened to US stocks so far in the second-half of 2008 – and given the US authorities' likely response – it won't be the last.

"You could argue," says John Authers at the Financial Times, "that all the measures to make money cheaper to stave off the different financial crises at the end of the Nineties simply puffed up stocks [and] created money illusion, without creating real value."

You "could" argue? If you want to pick this fight with cheap money, we'll hold your coat here at BullionVault. For your argument will pack a punch all on its own.

The White House and Federal Reserve – along with every other major Western government and central bank – took such fright at the apparent calamities of 1998-2003 that they poured money into the stock market.

First the Asian Contagion...then Long-Term Capital Management...then the Y2K scare...then the DotCom Collapse...followed by 9/11 and finally the invasion of Iraq...all these awful events demanded that somebody, somewhere, do something to support the financial system.

Did any of these calamities compare to the financial destruction now looming above Freddie or Fannie, Treasury bonds or the Dollar? No matter; the Federal Reserve under Alan Greenspan got straight to work and never rested, slashing interest rates and urging banks to create "innovative" loan products to jolly up consumer spending.

Joined by equally anxious central bankers in Europe and, most notably, Japan, the authorities opened the taps and invited everyone to take a bath.

Yes, stock prices rose worldwide. But they merely rose on a tide of under-priced money. The additional wealth which US equity investors thought they were buying was in fact being washed out by the very inflation of money driving those same stock prices higher.

Your real return? Right around zero. So where next? Well, higher dividends would make a good start.

As a percentage of current stock prices – known as the dividend yield – annual payments to shareholders now stand below half of the long-run average. But sharing corporate profits with corporate owners simply isn't the capitalist way anymore. 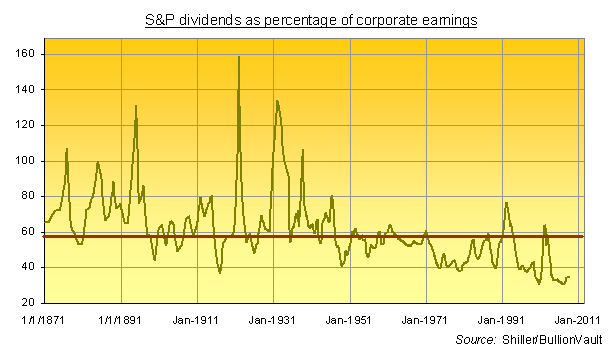 As the chart shows, giving money to stockholders now looks like so 20th century, it's downright Victorian!

In the 100 years ending Dec. 1999, the proportion of annual corporate profits going to stockholders averaged 59 cents in the dollar. It held above 50% during the five decades starting 1950 as well. But during the Decade of No Returns – that miserable 10-year period running from July '98 to last month – the share of corporate earnings passing to stockholders fell sharply to average an all-time 10-year low beneath 38%.

This was amid a booming economy, remember, marred only by one of the shortest recessions on record. Yet the share of corporate profits given to shareholders twice touched just 30 cents in the dollar. Because it's actually during recessions – when corporate earnings fall overall – that investors can expect to receive a greater piece of a fast-shrinking pie.

The deep recessions of 1921, 1932 and 1938, for example, all saw US investors receive more than 100% of corporate earnings. Which was just as well. Listed US corporations found such few uses for their cash, they gave more than they got onto their owners. But what the corporates got was tiny compared with the profits they'd made only a few years earlier.

In the four years following the peak war-time profits of 1917, corporate US earnings fell by 80%. They fell by two-thirds in the three years following the Wall Street peak of October 1929. And they sank again, down by one third, in the 12 months preceding the pre-war recession of 1938.

Fast forward to the late 20-century, and stockholders enjoyed an apparent bonanza again whenever the US economy shrank. They got 61% of corporate profits in 1971, just as those corporate profits fell to a half-decade low. They took 55 cents in the dollar during the long, deep recession of 1982-83; total corporate earnings, meantime, stood at a 20-year low after inflation.

The 1992 and 2001 downturns both repeated this pattern. Stockholders got a bigger share of the profits precisely when profits were thin on the ground. Why would anyone want to buy stocks going into recession?

"Capitalism sowed the seeds of its own demise," writes Mark Gilbert in a neat little skit for Bloomberg News, "because the benefits of a decade-long boom accrued to capital, with nothing flowing to labor.

"Telling workers who hadn't had a decent pay raise for years to tighten their belts once the good times ended proved disastrous," he goes on. But the fact is, the recent decade-long boom did NOT accrue profits to capital any more than it accrued them to labor.

So where did the money go exactly? CEO bonus packages will account for a good chunk of the missing money. The hard-grafting types of Manhattan took another piece of the pie; "seven of Wall Street's biggest firms boosted their total compensation and benefits to a combined $122 billion," as the Washington Post reported at the start of this year, "up 10 percent since 2006, despite seeing their net revenue collectively fall 6%.

"Mortgage-related losses reported by the seven firms totaled $55 billion and wiped out more than $200 billion in shareholder value."

But so what? The capitalists had it coming, right? Owning stocks was for the birds only during the boom of the last decade. Still, now that corporate earnings are set to collapse, at least stockholders can expect a larger proportion of sweet fanny adams.