END_OF_DOCUMENT_TOKEN_TO_BE_REPLACED

Will a half-per-cent hike in US bond yields really undo all the mischief of cheap money?

"TOO MANY PEOPLE think risk is dead," says Tom Metzold, a US fund manager. "They think that they can't lose money anymore."

Metzold runs the Eaton Vance Municipals Fund. He was speaking at the Reuters Investment Outlook Summit in New York earlier this week after buying higher-rated bonds – and selling junk – to raise the credit quality of his portfolio.

"We're selling stuff that others continue to buy," he told the Reuters delegates. But selling risk amid this bubble in credit is already costing him money. Anyone not sat right on the leading edge of credit excess will underperform his peers during a credit bubble.

Still, "the spread [between junk-bond yields and US Treasury yields] can't go to zero," Metzold reasons. "There has to be some spread between a triple-A and single-B security."

From here to zero, however, leaves plenty of room for leveraged bond buyers to buy more junk, thinking they're getting a bargain – high-risk or not – even as US Treasuries sell off. Relative to US government bonds, in fact, the yield paid by higher-risk debt has actually shrunk this past month. 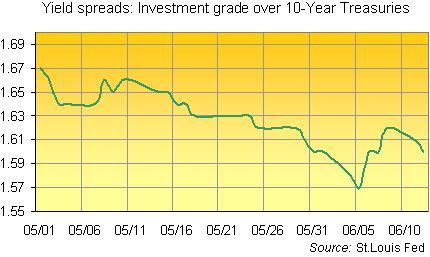 So while bond investors have been marking down the credit worthiness of Washington's debt, the Baa rated investment-grade bonds of USA Inc. haven't suffered so badly – not yet, at least. The half-a-per-cent leap in 10-year US Treasury bond yields has not been matched by a similar leap in the returns offered by corporate paper. Hence the squeezing of Baa yield spreads even tighter still.

The price of junk bonds has performed better yet, if by "better" you're happy to take a loss that isn't quite as bad as the next guy's. Martin Fridson of Leverage World, the high-yield research service whose name just about says it all, notes that junk bonds have "a comparatively low interest-rate sensitivity. So in a rising-rate environment [junk] would actually be a relatively good place to be."

Relatively is the right word yet again, however. During the last four weeks, according to data from Merrill Lynch, high-yield bonds lost 1.18% of their price on average, but lacking the mark of "investment-grade" actually stemmed their losses. The best-rated US corporate debt sank by 1.87% over that time.

"The 50 basis point back-up in 10-year US Treasury yields over the past month is a major step on the road to bond-market normalization," says Stephen Roach, chief economist and former über-bear at Morgan Stanley. He calls the current shake-out in long-dated US Treasuries Act II of the normalization process that's followed the Fed's deflation scare of 2002-2004.

Falling prices and a contracting US money supply never showed up. Perhaps we have the Fed to thank for that. But deflation would have been truly unusual in our post-Gold Standard world. Abnormal times called for abnormal interest rates – and so Greenspan and Bernanke matched their panic with an emergency 1% price for Dollars.

After raising rates 17 times to last summer, the Fed then went on hold. It's been waiting for the interest rate on 10- and 30-year US bonds to catch up ever since. Now, at last, long-dated US Treasuries offer to pay more to investors than short-dated notes – and Act II might reach its end without too much bloodshshed, says Roach.

"A third act is likely in the great normalization saga," he goes on, "this one starring the spread markets. So far, credit spreads remain abnormally tight, as do those on emerging markets debt instruments. There is no inherent reason why these assets deserve special exemption from a financial market normalization scenario."

'Credit markets' is a broad term, however – and it's come to represent an ever fatter and taller pile of notes and promises each day, too. Right in line with Economics 101, as those record-tight credit spreads show, this flood of supply hasn't pushed down the price. Because demand for credit-based investments – buying the debt that somebody else lent – has never been so popular.

The Swiss-based Bank for International Settlements says in its latest report that dealing in exchange-traded derivatives rose 24% during the first three months of this year from the same period in 2006. Turnover in leveraged interest-rate, currency and stock index contracts hit $533 trillion.

Sales of collateralized debt obligations also shot higher. Trading in these credit notes, based this time based on the credit-default swaps used to insure corporate-bond portfolios, grew by very nearly one-third from the end of 2006 alone, hitting $121 billion.

And standing atop this mountain of monetized promises, spending on mergers and acquisitions in the stock markets rose to a record total of $1.1 trillion in the United States between January and May. In Europe M&A hit $1 trillion, too. Only $1 in every $8 spent to fund this bonanza came in the form of equity, says the BIS. The rest of the money – fully 78% of all corporate deal-making – was paid for in debt, most typically corporate debt sold onto the bond market.

And so it was that, at least until May of this year, private equity continued to buy shares almost regardless of value. Hedge funds bid up junk bonds to earn just a few pips above official bank rates; the sell-off in Treasuries has only narrowed that spread further. The total volume of outstanding derivatives contracts outweighed the entire global economy more than eight times over.

Will the re-pricing of money – a.k.a. 10-year US Treasury bond yields – stuff the cork back in the vodka bottle? It would be a strangely quiet end to this party if so. No drunks crying on the stairs, no fisticuffs amongst the last stragglers. The newswires today fail to mention any one plunging from the Gherkin in London or No.60 Wall Street.

Might this bubble in debt really have grown so huge that it ends – as never before – without bursting?

"I continue to fear that central banks are far too smug about the effectiveness of their inflation-targeting tactics," Stephen Roach goes on – "especially in an era when the combination of low inflation and low interest rates is biased toward a steady string of asset bubbles. Normalization with respect to the narrow CPI [inflation] target hardly guarantees a normalization of broader macro risks that might stem from boom-bust outcomes in major asset markets."

In short, the super-low interest rates of the last five years may have reached their end. But the bubble in debt – most especially leveraged debt, born of a promise to pay sold to a buyer who in turn has to borrow to raise the cash for the purchase – still remains.

We're a long way from "normal" in short. Getting straight might prove harder than simply enduring a 0.5% hike in the base cost of money.