END_OF_DOCUMENT_TOKEN_TO_BE_REPLACED

Savers, retirees & wage-earners are just collateral damage in the war between debt & depression...

SLASHING the Bank of England's base interest rate to an historic low of 0.5% was supposed to "rebalance" the economy.

But all that the resulting 20% slump in the Pound has done so far since rates began sinking – two years ago this month – is gift a no-brainer gain to Gold owners. 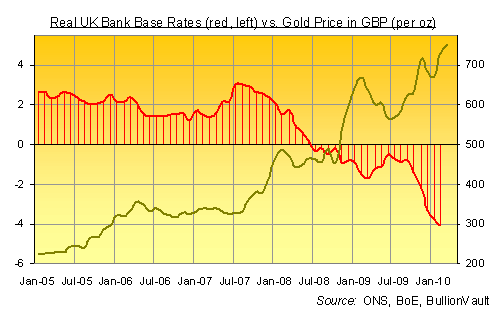 "While we were hit with a great recession, we now know that the world has indeed avoided a great depression," said UK prime minister Gordon Brown at a Reuters press conference in London bright and early on Wednesday.

Just as with the war in Iraq, however – another "shock and awe" campaign planned with little thought for the collateral damage – we'll never know how things would have panned out if brave men like Brown hadn't done "whatever it takes". And just like in Iraq, victory has been declared way too early.

New data today showed industrial production in the UK sinking to 1991 levels. The employment rate has sunk back to 1996 levels, meaning a net loss of private-sector work when you allow for Brown's intervening civil-service jobs jamboree. And despite the collapse in Sterling, the UK's trade deficit has been widening for more than a year, verging at last count on the record 3% of GDP hit at the very top of the credit bubble, 2005-2008.

"Let us be clear," says Brown, "the economy is growing, but remains fragile."

And the cost of this modest success...?

Not quite depleted uranium, then. But followed up with cluster-bombs of £200bn in quantitative easing – money wished into existence by the Bank of England, and entirely spent on government bonds, thus flirting with that "debt monetization" which typically precedes hyperinflation – the campaign for hearts and minds is at least being won at home, if not amongst the victims.

"Just allow it...just admit it. It doesn't matter where the inflation comes from. It doesn't have to be through monetization of public-sector deficits, although at a pinch we may need to do that. What I am saying is that if we do get cyclical [demand-driven] inflation, then let that inflation stay...allow it help to write down the real value of debt."

Naturally, Motianey was talking to CNBC this week because he's got a book to promote. (Hey, we're all shills, remember.) And naturally, looking to sell a few copies, his policy prescriptions conclude with handy tips for investors on "How do you preserve purchasing power, how do you preserve savings?" amid the inflation which Motianey says we should – and shall – get.

The finance industry can have it both ways, in short. Government debt can be inflated away, while creditors are somehow protected. I can't say whether Gold Bullion is part of his saver's solution. But when fixed-income economists beg for inflation...and pretend that savers won't get screwed in the process...you've got to wonder where else you can hide.