END_OF_DOCUMENT_TOKEN_TO_BE_REPLACED

Quite how much of that Alex Salmond would like Scotland to carry if it secedes from the Union, we can't say. But according to McKinsey & Co.'s new Debt and Deleveraging report, the gross sum of all loans and fixed-income debt of the UK national, corporate, household and financial sectors stood at 507% of GDP in 2011.

That's a hefty burden to service, let alone pay down as McKinsey urges. Amongst major economies, Japan just pips us to #1 at 507%, but it did take 20 years of economic depression, zombie banking and debt-fed "make work" programs to get there. The Eurozone's heaviest debtors – the ones causing such angst worldwide – are led by Ireland at 663% (that's what comes from nationalizing your entire banking industry at the top of a credit bubble), while Spain, Italy and Portugal all owe some 300% or more. Greece's gross debt is 267% of GDP.

The oddity, of course, is that a vast chunk of the UK's gross debt is money it owes to itself. Or rather, debtors owe creditors in a vast tangle, spread across the world's sixth largest economy. Yes, there are substantial overseas debts, and the proportion of national debt held  by foreigners has crept up from 25% to more than 30% in the last half-decade. But our reliance on overseas funds and money markets to help finance private bank borrowing has shrunk (on our maths at least) to a little over 11% of the total since peaking at 21% in 2008.

Delevering is being attempted, in short. And holding onto its sovereign currency, rather than leaping into the warm embrace of German interest rates via the Eurozone pact, the UK thus remains "a free nation deep in debt" as one London hack (most likely Daniel Defoe) called Great Britain just before – oh! – its first national debt bubble blew up in 1720.

We can borrow as we choose, free from meddling Germans and their calls for austerity oversight. We can then print all the money we like to service (if not settle) those debts, safe in the knowledge that inflation will mostly hurt domestic savers, rather than risking our international credit. 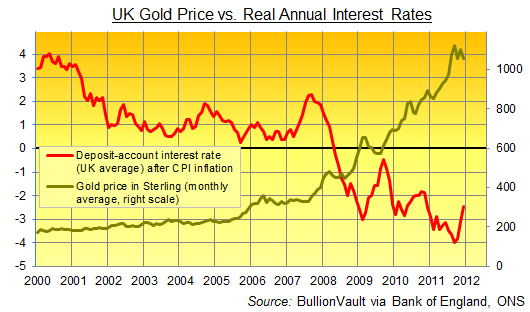 "These record low gilt yields demonstrate the market's continued confidence in the Government’s plans for fiscal consolidation," said a Treasury spokesman this week of the new all-time low hit by 10-year gilt yields, now paying less than at any time since the national debt got started three centuries ago.

Nominal returns of 1.9% per year also demonstrate just how tightly we're squeezing domestic savers, however. Little wonder a growing number are seeking to abandon credit and bank risk – albeit with some small chunk or other of their savings – by embracing price risk instead in rare, indestructible physical gold property.

Get the safest gold at the lowest prices using the UK's No.1 provider – and winner of the Queen's Award for Enterprise Innovation – BullionVault...